After this episode of Outlander, we could all use a drink…just not Créme de Menthe!

The last episode ended with Claire being assaulted and threatened with rape. She’s definitely back in the eighteenth century. (Sigh.) Claire’s a fighter so she manages to slice the guy and then he trips and hits his head. He’s out for the count.

Jamie finally shows up with Madame and they recognize the villain as the customs guy Jamie’s been bribing to look the other way as he’s smuggled liquor. This can’t be good. Jamie is willing to let the guy die, but Claire swore an oath so she’s going to try to save him. She runs out to get some supplies and Jamie heads out to move the liquor out of the brothel since they will surely be searched when someone notices the almost-dead guy is missing.

Jamie sends Willoughby to sit with the almost-dead guy while Young Ian, Fergus and the two seditious-pamphlet dudes (Lesley and Hayes) hustle to move and sell off whatever liquor they can.

At the apothecary, Claire cuts in line because the almost-dead Guy’s brain is swelling and she needs to crack open his skull to relieve the pressure. (She doesn’t tell the apothecary or his other customer this.) She agrees to treat the other customer’s sister so she can jump in line. He says to seek out Archibald Campbell.

Back at the brothel, Claire doses the almost-dead guy and starts to drill when Madame brings word that Sir Percival, the local lawman, wants to search the place. Jamie goes to deal with him as Willoughby assists Claire with drilling a hole in her would-be rapist’s skull.

Sir Percival and his one-eyed henchmen find an empty store room (whew!) but swear they will find proof against them. One crisis done.

Meanwhile almost-dead guy is now truly dead guy. It would be hard to explain what happened if he lived so another crisis averted.

Claire heads out to take care of the Archibald Campbell’s patient. Archie makes a living with his sister as fortune tellers, but she’s a bit hard to control. Claire knows the girl has some mental issues so she convinces Archie to stop dousing her with laudanum even though they are off to the West Indies and he’s worried how to control her on the ship. 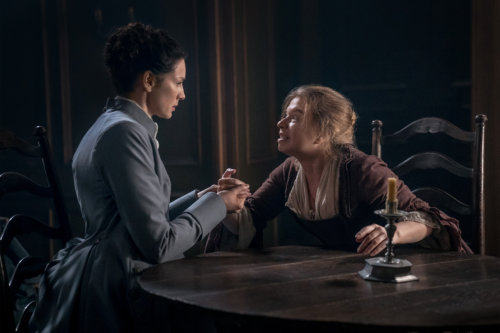 Fergus and Young Ian unload a lot of whiskey and even some casks of awful Créme de Menthe. They celebrate their profitable day with a drink at a pub and Fergus waves over Young Ian’s dream girl so Young Ian can lose his virginity. Looks like a busy day (and night) for Young Ian. 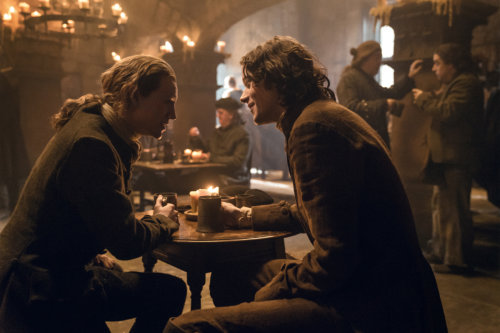 Young Ian takes his girl back to the print shop since he sleeps in the back room. The poor boy is interrupted in media res when Sir Percival’s one-eyed henchman breaks into the shop to look for whiskey. Young Ian sends the girl off and tries to stop the henchman who finds the seditious pamphlets. Whoops!

That’s an even bigger crime than smuggling so the henchman cackles with glee when Young Ian scars his face even worse. They scuffle a bit and the print shop lights on fire. Whoops again!

The henchman flees, but Young Ian is trapped.

Back at the brothel, Jamie and Claire are having their first fight of the new era on a number of subjects. Topic #1: living in a brothel. Claire wants out, but Jamie thinks it’s too convenient and likes the free rent. Before they can get into it further, Ian visits. Old Ian or Regular Ian. The Ian that’s married to Jenny.

Ian is amazed to see Claire, but he’s a bit distracted since he’s in search of Young Ian who ran off a few weeks ago. Jamie claims that he hasn’t seen the scamp in months. Claire plays along but she’s dying to speak up.

Jamie and Claire head back to the room and resume their fight but on topic #2: Claire can’t believe Jamie is hiding Young Ian from his parents. Jamie shrugs it off and says that Young Ian would runaway anyway so it’s better that he’s with his uncle. Claire is mad that Young Ian’s parents don’t get a say on how their son is being brought up.

That triggers fight topic #3: Bree. Jamie had no say on how Bree was being brought up and she’s wearing bikinis and such. The argument moves on to topic #4: Did Claire love Frank?

Claire reassures Jamie that she wasn’t in love with Frank. Before they can really make up, Madame brings word of a fire in Carfax Close. The print shop! 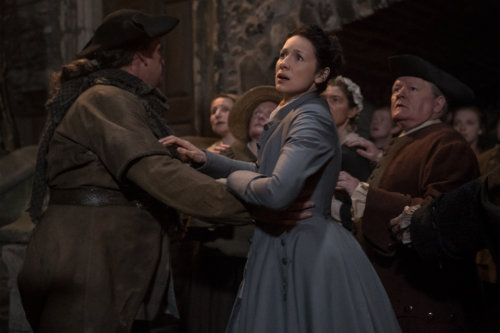 They rush out to the print shop and Jamie realizes Young Ian may be inside. He bursts in and jumps around like Batman to grab the portrait of Willie and the unconscious Young Ian. They escape just as the building comes down.

Willoughby and Fergus join the three of them as Young Ian relates that the henchman has some of the treasonous pamphlets. They need to leave Edinburgh before they get hanged for treason. Jamie suggests hiding in another city while Claire insists it’s time to take Young Ian home to Lallybroch.

Jamie agrees since Edinburgh only knows him as Alexander Malcolm so being Jamie Frasier again is a good way to hide. Hooray for having so many aliases!

Jamie sends Willoughby to pay off their debts and asks Fergus to get in touch with Ned Gowan since he has a legal matter to deal with. Yes, Ned Gowan is still around! (He’s the MacKenzie lawyer from when Claire first arrived back in time.)

Fergus nods knowingly and asks if Claire knows about Jamie’s other wife.

Jamie watches his print shop go down in flames and we have a feeling something else will be burning soon.

Erica: So much plot to cover in this episode! Talk about leaving Edinburgh with a bang. I won’t miss saying “back at the brothel.”

Erica: Every season has transition episodes as they set up new story and plot. They usually aren’t the best episodes. Still, it’s good to see some conflict between Jamie and Claire since there’s a lot that’s unresolved.

Alicia: Is it weird to say that was my favorite part of the entire episode? Probably because I like how real it is. They’ve been apart for 20 years, they’re not the same people, that’s almost a lifetime, I mean they could butt heads before, but now…I feel fireworks are on the way! Especially because Claire has really become used to how much freer 20th c. women were vs. 18th c. women.

Erica: I’m pretty sure Claire isn’t going to love that Jamie’s been lying to her about another wife so we will definitely see sparks. Not quite kingly for the “King of Men.” I loved the scenes with Fergus and Young Ian. We’ve only had glimpses so far so it’s good to see them in action. Those two are bound to cause a lot of trouble! 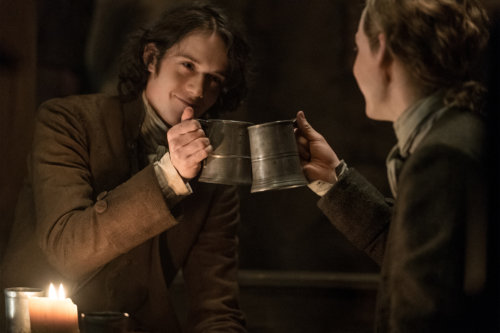 Alicia: Right? Troublemakers and heartbreakers. Can I just say that the print shop fire and Jamie going all Batman (and now I’m thinking back to Claire making her outfit montage – lol) was – and I’m sorry to say this – one of the dumbest things I’ve seen on this show? Running in – got it. Pushing the press to the window, balcony, whatever to get them out? I’m down. But that jumping over the railing and landing all ninja style. Just no. He’s a Highlander, not The Highlander. Although I’ll say if there can be only one – let us pray it’s Jamie Fraser – he he he.

Erica: Lol! Well, Sam did play Batman in the stage show so he’s had experience. But, yeah, it was a bit out of place. I didn’t expect him to ninja Young Ian out of there.

Erica: This is the section of the book that I don’t quite remember. To me it’s print shop and then off to Lallybroch for all those hijinks.

Alicia: Geez, where do I begin? So Claire kills the exciseman (accidentally) vs. Mr. Willoughby purposefully killing the man to protect Claire – even in his incredibly drunken state. Young Ian’s already running game for Jamie vs. them only finding out he’s in town after the fire. Sir Percival is hunting Jamie down vs. warning him of a possible smuggling rendezvous going south. The pamphlets did get out vs. Young Ian setting them on fire to keep them safe. And I could go on. Lots of changes and some rather odd but I guess for the sake of the show I understand?

Erica: I think some of the changes make it clear they need to leave Edinburg and possibly Scotland if Jamie may be hanged. Developing Young Ian now also helps make him worth chasing after. I am a bit surprised by how self-sufficient they are making him. I always pictured him as more helpless which is why he needed rescuing.

Alicia: I didn’t like that Claire points out to Jamie that Young Ian isn’t his son vs. Older Ian doing it. It comes off way harsher and thoughtless this way.

Erica: They had a whole lot of conflict this episode. I think it’s to make the upcoming fight over Laoghaire that much bigger so Claire really does head out with the intention of going back to the future.

Alicia: Also, they’re continuing the “let’s make Mr. Willoughby a more likable character on show vs. book” b/c we still haven’t had to deal with the foot fetish or his constant drunken buffoonery.

Alicia: Also, now I’m thinking of the Crème de Menthe YI promised that guy and a dead body is in one of the casks. Ew. Ah, the Archibalds. Interested in seeing how they play that out once everyone gets to the West Indies.

Erica: It’s going to be such a shock to leave Scotland to go to the colonies and get a little supernatural.

Alicia: GRRRRRRR…Lallybroch means Laoghaire. Blech, blech, blech! BLECH! I seriously think it’s the one time in all the books I honestly don’t like Jamie. For some reason I can wrap my head around anything else he did/does, but never, never, never will I understand marrying that bee-ach. I am not looking forward to that episode at all. It’s also the part of the book where I really dislike Jenny. Same reasons apply.

Erica: They tried to soften Laoghaire last season so I think they have an approach to this up their sleeves. I hope it works since it’s an ugly bit for all the Frasers.

Claire returns to Lallybroch with Jamie, where she does not receive quite the reception she was expecting. Unbeknownst to her, Jamie’s made some choices in their time apart which come back to haunt them with a vengeance.