Home / Columns • Fanboy Family • Featured • Outlander • Q and A • The Novel Strumpet • Written Revelry / “Outlander” Q&A! What to Expect in Season 2 and More!

You may have gathered by now that Saturday at San Diego Comic-Con 2015 was Outlander day for many of us fans. Aside from the panel and signing, I was lucky enough to attend a roundtable Q&A with Ronald D. Moore (Executive Producer), Diana Gabaldon (author of the “Outlander” series), Sam Heughan (Jaime Fraser) and Caitriona Balfe (Claire Randall/Fraser).

Before reading further, understand that I’ll be writing about things pertaining to book two “Dragonfly in Amber”. Locations, Characters, Events, and more will be included, so if you haven’t read the book, watched the panel, kept up with your Outlander social media…stop now.

Still with me? Then here we go:

Season 1 went over quite well with the established reader fan base and introduced excited new fans to the story through the show. According to Moore:

“They (Starz) read [the book] and said to me ‘Why don’t you make it for the fans and try to make it the most faithful adaptation you can and the general audience will come along for the ride much like the readers did.’” 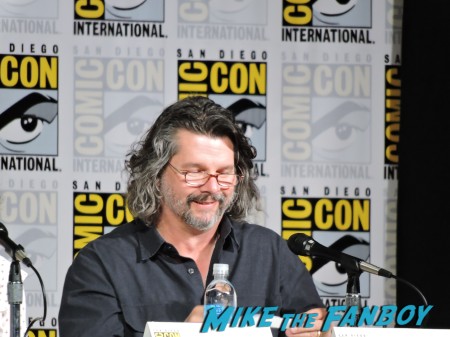 And that’s exactly what he and his team did. Of course there were changes, characters cut, scenes added, dialogue rearranged, but such are the realities of adapting a large book (the first one is over 800 pages) into a television series – It’s no easy matter. This season will have 13 episodes vs. the first season’s 16 episodes, so the cast and crew will have quite a challenge on their hands.

In fact, someone asked Gabaldon how she felt about the adaptations in Season 1 and if there was anything that really stood out. “In the Castle Leoch scenes, they changed the relationship between Collum and Dougal, and I really liked [that relationship in the books], but I really enjoyed the way they did it. That’s also owing to the actors, because they are such great talents and have such wonderful energy.”

For Season 2, Moore hinted that there would be even more: “[Book 2] is more complex, it switches POV a couple times, it’s more political, the dynamics are more complex. Book 1 had a cleaner, streamlined narrative so you could break it down into components. Book 2 took more time. In the writers’ room you’re saying ‘If we had to change it, is there another way to get to the same point, even if we put it later?’ Also tougher production because it’s Paris and literally every set and every costume and prop had to be different so [we’re] producing a whole new series.”

So what changes can we expect in Season 2? The biggest seem to center around the location, which changes the entire look and mood of the show. Jamie and Claire have sailed to France and hope to stop Bonnie Prince Charlie from leading the Jacobite uprising and therefore prevent the bloody Battle of Culloden. Gone are the gorgeous vistas of the Scottish Highlands and instead the duo – along with Murtagh played by Duncan Lacroix – must navigate the urban settings of Paris and the Court of Louis XV.

According to Moore, the color schemes have changed, the music is different, the buildings are brick instead of stone and dark wood, and there’s gilt, upholstery, and satin “…it’s a lusher visual show.”

Heughan concurs: “Terry has quite outdone herself with [the costumes], and all the interiors for Paris are in our new studios and stunning with courtyards and balconies…” Heughan also admitted to a bit of trepidation for Jamie’s new duds.

“I was worried before we started I’d be in all these flouncy frills and cuffs and things, but worked very closely with Terry and struck a happy medium. Jamie has assumed this role of the Laird in the French court, but [he’s] still Scottish and still the same guy and some little details like the kilt are still in use.”

OMG, I didn’t even consider Jamie without his kilt!

Balfe loves the changes: “You have a slight fear that you’ll go back for Season 2 and it’s gonna be like Groundhogs Day, but it’s so different, and they’ve done an amazing job with the costumes and sets. [Claire and Jamie’s apartment] is insane – I want to move in there.”

However, the pretty packaging is just on the surface. Our beloved duo is still dealing with the events at the end of Season 1 and with the discovery that they’re expecting parents. There were quite a few questions around how much of that will carry over into the next season.

Moore assured us: “All that carries over.” He explained, “Season 1 was more of a courtship of these two characters, now they’re married and joined as a couple and trying to do this very difficult thing and dealing with the aftermath of Jack Randall.”

Heughan says they may have ultimately decided to stick by each other, but it doesn’t mean smooth sailing: “During day they’re out there in the French Court trying to affect the politics and the major players, but also when they go home they have to deal with the reality of their relationship and it’s not in a great place when we start. It has hope but there are some issues they have to deal with.”

I specifically asked Balfe, what these changes mean for the evolution of Claire’s character:

“Last season Claire was just reaction to her environment, and she didn’t get a chance to breathe. She was thrown back in time, one event after another, and she was really trying to survive. This season it’s more contemplative. I think she’s learning more about herself, about becoming a woman and a mother, and her role with Jaime.”

And what about Claire’s medical training in the midst of all this political intrigue? One of the interviewers was particularly interested in how much the hospital was going to figure into the season. Moore told us that it would be in several episodes and Balfe said the scenes were great to film. “The role of women in France at this time is almost more restrictive than in Scotland. They’re expected to be pretty and dressed up and sit and have tea and gossip and Claire, quite frankly, is bored out of her mind. So when she finds an outlet for her professional side, almost her individualism, at the hospital, it makes her feel alive again.”

Everyone also talked about how delighted they were with the actress playing Mother Hildegard, Frances de la Tour, which led to talk about the new cast members and characters. Moore, Gabaldon, Heughan and Balfe had nothing but praise for the new additions, especially Scamp, the terrier (Cairn, I believe) who plays Bouton and Romann Berrux who plays a young Fergus – Jamie and Claire become sort of surrogate parents to him – and according to Balfe: “Apparently, he’s heavy, which you should ask Sam about, because he struggled to lift him.” Hmmm… Heughan expressed his delight at the new dynamics these actors bring into the show. Season 2 will bring Jamie and Claire a whole new set of allies and enemies. 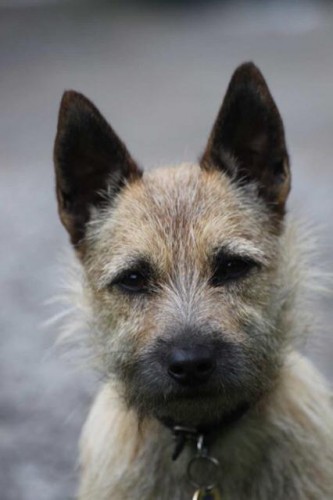 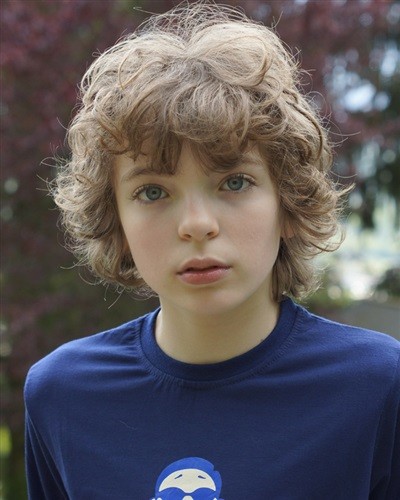 Of course I asked about Brianna and Roger…nothing to report there! Darn it!

We all wondered what they were looking forward to most in Season 2. Moore jokingly answered “wrapping” while Sam seems eager to film the Battle of Culloden. Since Gabaldon was quite open about her eagerness to see the scenes at Wentworth Prison last season, I asked her what she was specifically looking forward to this season: “I’m not allowed to tell you because not everyone reads the books and isn’t going to unless they reach the point where they have to read and find out what happens next.” 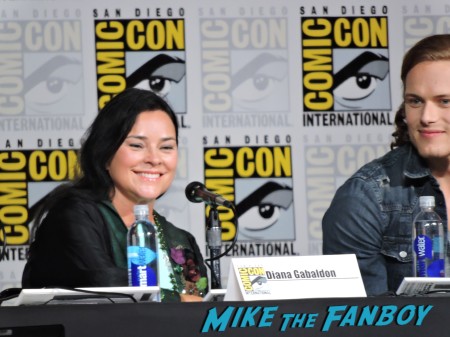 Which brings up the topic of fans. Book vs. TV. New vs. let’s say Seasoned. Moore, Heughan and Balfe were quick to say how pleased they were with the reception they’ve been given and in regards to social media Balfe said: “it’s nice when you go on Twitter and check in to get such wonderful [responses] from fans. We all feel so bowled over by how well it’s done.”

Gabaldon wasn’t quite so surprised since she told Heughan and Balfe before they started shooting the first season what her fans were like:

She went on to say: “It’s raised my social profile. One of the aspects of the books was that fans found each other and had parties and formed groups and that aspect has gotten much bigger.” Indeed it has, and while that has put pressure on the stars as far as their personal lives are concerned, it’s also led to viewers gathering together to raise support for charities the cast and crew are involved with.

So what does the future hold? Are they looking forward to Season 3? According to Moore: “I’ve thought of it a bit, and hope I have such problems (adapting the third book). I’ve done some preliminary thinking; it’s such a big book. What’s the adaptation [going to be] or do you split it into 2 seasons? Lot of strategic thinking I haven’t really done yet.” Someone even suggested a possible Black Sails/Outlander crossover since thar be pirates ahead, to which he quipped: “That would be fun. It’d be the only way we’d get to use their ships.”

What about the books? Is there an end in sight? (SAY IT ISN’T SOOO!) According to Gabaldon: “I wrote the final bit of the last book some years ago because it popped up. It’s not really plot, it’s more an epilogue, so even before they began filming, I showed it to Ron and Sam, and they’re the only other people who’ve seen it because they needed to see it.”

WAIT! What? Why? Why did Heughan need to see it? What does this mean about Jamie? Or Claire? Or both? AAAAAARRRGGGHHH!!!!

I can’t wait! It seems Season 2 is shaping up to be an awesome one! Sadly, we are entering another #Droughtlander since Moore said they’d probably be shooting until February 2016, with only a couple of small breaks. In the meantime, we have Season 1, Volume 1 and coming in September Season 1, Volume 2 to keep us company! Maybe it’s time to reread–or read for the first time–“Dragonfly in Amber” (Maybe we should start a book club? Hmmmm….) or plan a season two premiere party!

You can catch up with any of the season one Outlander articles Erica and I did or any other articles we wrote that you may have missed, and check out Erica’s write up on the panel and signings…so check that out.

Leave you comments and feelings below, and we encourage you to keep in touch with me and my cohort in all things Outlander, Erica: : thenovelstrumpet@gmail.com and erica@mikethefanboy.com

Until next time our Outlander friends!