Home / Outlander • The Lovely Erica • The Novel Strumpet • TV Heartbeat • Written Revelry / Outlander Recap and Reflection! Reunited with the MacKenzies and off to battle!

Claire and Jamie have their troops so it’s off to battle, right? Nope. First we have to get the men into fighting form with a little help from some old friends and frenemies.

Claire and Jamie travel with about a hundred of Lord Lovat’s men to meet Murtagh and the men of Lallybroch. Murtagh is impressed that they got troops from Lord Simon who remains officially neutral in this war. A few of Lovat’s men deserted Young Simon is chasing after them with the promise of land after victory. Too bad he’s going to miss the upcoming military training because, if his skills are anything like his poetry reading, he’s going to need some help. 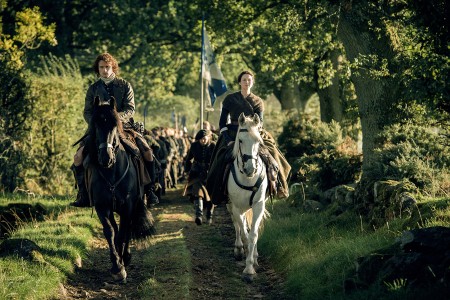 At the camp, they reunite with Fergus who is joyful to see milord and milady again. He doesn’t mind helping out Jamie and Claire, but he draws the line at mending Murtagh’s socks and fetching his meals. The MacKenzies also show up. Well, some of them do. Rupert and Angus (and his eyebrows) make a jolly arrival, but young Willie is, sigh, married! Rupert and Angus mourn their earnest companion since Willie is happily married to an Irish lass and off to America.

Then Dougal MacKenzie arrives. A devout Jacobite, he’s left Colum and his neutrality behind to go to war. Since he’s gone rogue, it’s just him, Rupert and Angus. Jamie’s glad to see his uncle, a fierce fighter, but Claire is more reserved. The last they talked, Dougal basically said she had to marry him after Jamie’s dead. He’s such a charmer. 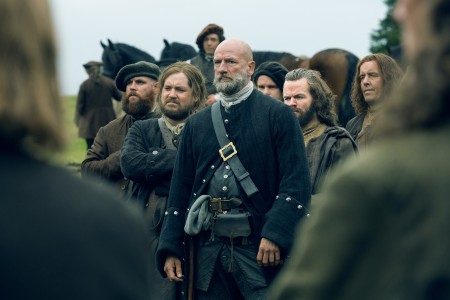 There’s camaraderie in their makeshift military camp, but the men are not soldiers. The MacKenzies are seasoned fighters so Jamie now has some lieutenants to help whip these guys into fighting form. Dougal is eager to jump into battle and wants to meet up with Bonnie Prince Charlie soon. He’s worried that other clans will get on Charlie’s good side first. Jamie refuses to leave because the men aren’t ready for battle.

It takes several long montages before the men are an acceptable fighting force. Thankfully there are bagpipes and a rousing Gaelic song to accompany the training sequence. 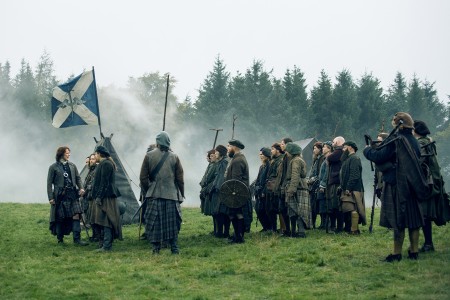 Jamie speaks to his would-be-troops and just about has them ready to fight in unison when the shirtless and mud-splattered MacKenzies holler and run at them in a crazy Highlander charge. Frightened, the trainees break formation and Dougal says they need to go crazy and scare the English. Jamie disagrees as they aren’t likely to surprise the English so that kind of a charge won’t work. 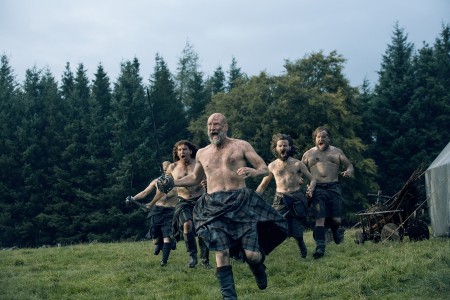 Jamie reminds Dougal that these are his men and his clan so Dougal needs to respect his orders or leave. Dougal says “as you say” which is way too agreeable for him. Sure enough, he hunts down Claire and tries to get her to speak up for him. Dougal reminds her that he’s still waiting to marry her for her protection Yeah, that’s why. Nothing to do with some corn he wants to grind. Claire says he’s full of himself and that he’s going to war for himself and not for Scotland. He argues that Scotland is everything and he’d give his life to see a Stuart back on the throne.

Dougal goes out to find some troops of his own and forces a couple of “volunteers” into camp. Jamie frees them of any obligation and they all scatter. The bigger issue, for Jamie, is that their guards didn’t stop a bunch of strange men from wandering into camp. Jamie has to whip the guys on sentry duty and puts Dougal and the MacKenzies on sentry duty to make up for this mistake.

The encampment, the training and the possible gangrene all remind Claire of WWII. Jamie notices she’s withdrawn, but she’s not talking. During shooting practice, the gunshots make her flash back to a specific night when she was traveling with a couple of American soldiers. Their jeep was ambushed and while she was thrown clear into a ditch, she spent the night hearing the screams of the men as they were burnt alive and died. 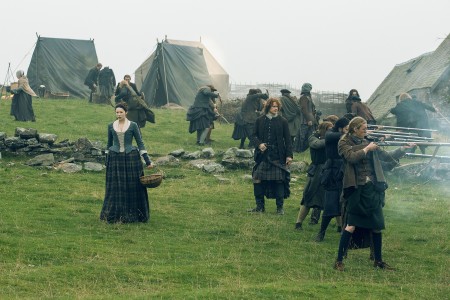 Jamie consoles her that there was nothing she could do to save them. She doesn’t want that to happen again so she’s determined to go with Jamie to war so she can try to help. She can’t go back to Lallybroch since it’ll be like being in that ditch and standing back, paralyzed, alone and unable to help.

He promises her that she’ll never be alone. She promises to hold him to that promise. 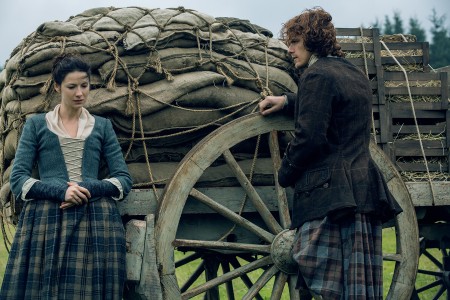 That night, Jamie is ambushed by a young English soldier who sneaks into camp. The lad saw their campfires and recognized “Red Jamie, the unprincipled and traitorous rebel” and decided to do the patriotic thing and kill Jamie. Jamie starts to interrogate the teenager who is full of youthful conviction and refuses to answer Jamie’s questions. 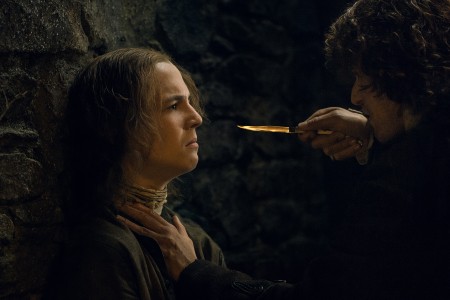 Claire, alerted by all the screaming, enters the room and sees that the young man is stubborn and about to go through a lot of pain. Ever the nurse, she sees a way of getting around this by pretending to be an English prisoner. All the Scots freeze, puzzled by Claire, until she offers her virtue if they will let the boy go free. Ah!

Jamie catches on and says that maybe the lad is too brave to care about himself, but he may be concerned about the lady’s welfare. Jamie grabs Claire like he’s about to rape her which infuriates the young man. Jamie flashes a bit of her thigh and Claire gets even with a good knee to his thigh. Murtagh just leers at their prisoner the whole time, trying to hold back a laugh as they continue to “struggle.”

It’s too much for the boy who spills the beans so Jamie will stop wrestling with Claire. His name is William Grey, he’s the second son of Viscount Melton and he’s traveling with a large squad with heavy artillery on their way to Dunbar. Jamie gets their camp location and sends a couple of guys to verify the location with orders to leave the lad near the camp so his friends will find him the next day. Jamie gives William Grey his life and hopes he will use it well. William reluctantly acknowledges the debt of honor and promises to kill him after the debt is re-payed.

They keep having this sentry problem at camp so Dougal will need to be whipped. But Jamie also says he was at fault for having an unshielded fire so he needs to be whipped as well. After the whipping, it’ll be time to take care of Mr. Grey’s fellow soldiers.

Jamie returns home in the early morning hours and wakes up a sleeping Claire. He’s delighted with the success of his commando raid’s where they burned the wheels for all the British canons. That heavy artillery is now useless so their bloodless raid will save lives.  All due to Claire’s selfless act to preserve William’s honor.

Since the English will be after them, they pack up and head out to meet Bonnie Prince Charlie.

Finally, the Frasers are Je Suis Prest – I am ready. 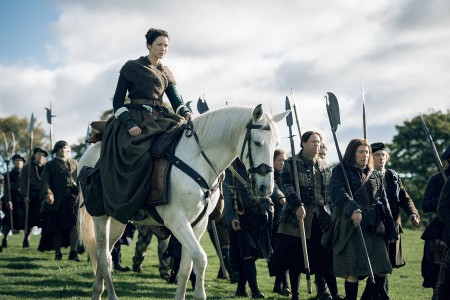 Erica: Oh Angus and Rupert! How we missed your bromance! It was also great to finally see Dougal again. He’s been rather amenable to all the little jabs from Jamie to keep him in his place. You know that Dougal is tallying them all up in his mind…

Alicia:You know Dougal is plotting. Question is, what is he plotting and how long will it take him to act? Grrrrr….

Erica: I loved the scene will William Grey. The looks that Jamie and Claire were throwing each other during the struggle were priceless. That was definitely the highlight of the episode. I know the troops had a long way to go, but that was a rather long training montage.

Alicia:Yeah…it was a long bit of training.

—–BOOK READERS DISCUSSION – (Spoiler Alert!!)———————————
Erica: Our first glimpse of John Grey! Oscar Kennedy did a fine job as the 16 year-old John. I’m curious as to who they will cast to play him next season.

Alicia: JOHN GREY!!!! I heart him. I heart him so much. I heart him most when he and Claire get all “cat fight” over Jamie…rawr! LOL. I can’t wait for those scenes! I do wish they’d played out his ‘entrance’ a little more like the novel, but it was still funny to see Jamie and Claire ‘pretending’ to fight and all the clansmen looking at them like they’d lost their d*mned minds 😀

Erica: I didn’t love the WWII flashbacks for Claire. It felt weak for her after everything else they’ve been through.

Alicia: Yeah, the flashbacks/PTSD scenes were a little off for me too. I get where they were going with them but it didn’t quite carry through. War is coming, along with many other painful things.

Erica: Ain’t that the truth?

Trusting in Claire’s knowledge of “history,” Jamie leads the Jacobite army into a critical battle with British opposition near the town of Preston.  Meanwhile, Claire attends to the dead and dying, a reminder of the truest costs of war