This season is just a laugh riot a minute. Not. Jamie made it home to Lallybroch and Claire is starting over in Boston so life is good right? It’s time for both of them to move on, but that’s easier said than done.

It’s six years after a wounded (and very alive much to his chagrin) Jamie reluctantly returned home to Lallybroch courtesy of that debt of honor to Lord Melton’s family. The English army is pursuing Jacobite rebels including the notorious Red Jamie and someone called Dunbonnet (gaelic for “Brown hat”). The current head honcho, Capt. Lewis, tells the Murrays he knows Red Jamie and Dunbonnet are one in the same. (Slow clap to you Capt. Lewis.)

The red coats routinely shakedown Lallybroch in hopes of finding Jamie and every time, Jenny insists he’s not around. The English take Ian for questioning which appears to be fairly routine as well. That leaves a very pregnant Jenny with 3 rascally kids: Wee Fergus (who’s a foot taller since we last saw him), Rabbie McNab (remember him from episode #112 ‘Lallybroch’?) and her eldest boy Young Jamie.

Older Jamie, looking all brooding and #lumbersexual, is not at Lallybroch, technically. He’s hiding in a cave somewhere nearby and occasionally drops by the big house for some human company. He might not have died at Culloden, but he’s not quite living. He’s missing Claire something fierce. 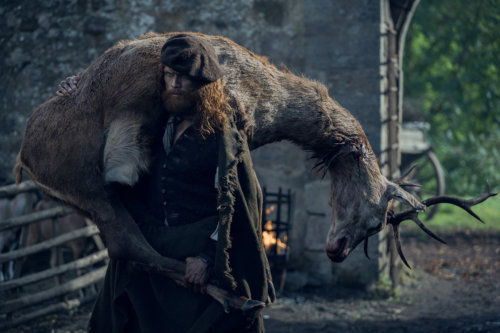 On one of his rare visits to Lallybroch, he gets to hold Jenny’s latest offspring, Young Ian who is maybe an hour old. Jenny wants to see Jamie come out of his ghost shell and suggests he move on and get together with their housekeeper, Mrs. McNab (a widow), who’s still fertile. Gee, Jenny is all kinds of subtle here.

While the grown-ups are visiting, Fergus, the scamp, fires off a pistol which attracts the attention of the English. The Scots are not allowed weapons so they show up to the house to search for the guy while Jamie is still holding Young Ian. Yikes! But quick-thinking Jenny and Mrs. McNab save the day and manage to get rid of the redcoats. Jamie starts to realize that Lallybroch will always be in danger while the English are looking for him.

A couple of zealous redcoats decided to tail mouthy Fergus, sure that he will lead them to Red Jamie. Fergus spots them a mile away and taunts the officers who follow him. One gets super peeved and chops off Fergus’ hand and leaves him to die. 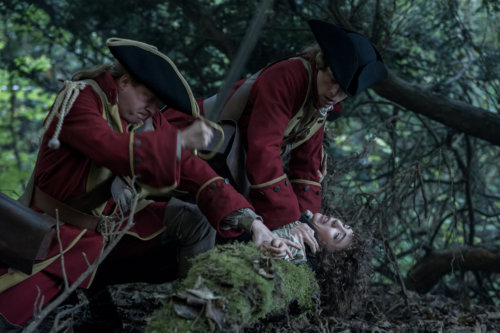 Jamie, who saw the whole thing, grabs Fergus and spirits him off to Lallybroch in time to save his life. Jamie realizes that he still has something to care about in this world and decides to give Lallybroch some peace. He wants Jenny to turn him into the English. He figures if she hands him over, Lallybroch will prove their loyalty and the family collects the reward on his head. Since they aren’t hanging Jacobites anymore so he’ll just go to prison. To which Jenny replies “again?!?!?” (We feel ya Jenny!) 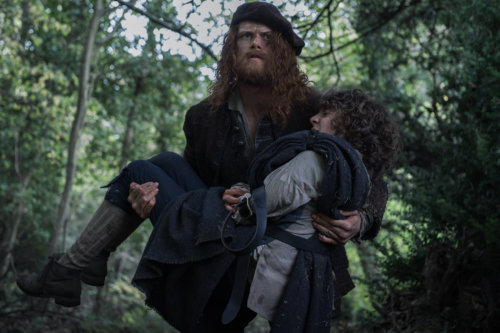 Mrs. McNab visits Jamie at the cave to bring him a last meal, a shave (bye #lumbersexual Jamie!) and some, um, comfort. As a widow, she needs a little somethin’, somethin’, too. Jamie’s okay getting a little comfort, too since it’s been 6 years since Claire left. It’s sort of a mood killer if the guy can’t look at you and is crying the whole time so this isn’t one of the infamous Outlander sexy sex scenes.

Next day, according to plan, Jamie “comes home” and is promptly arrested. He puts on a great show of feeling betrayed while Jenny yells out he gave her no choice and she won’t forgive him. Somehow we think she truly means that.

In Boston, around 1949-ish, Claire has some urges of her own and, luckily, Frank is there. He’s a happy participant until he realizes that she’s not really with him during these moments. Ouch! Separate beds it is!

Still, they are happy cooing over every little miracle baby milestone with Bree so life doesn’t totally suck. And they get to have super awkward dinner parties with the neighbors. Fun times! But Claire is wanting more and decides to head back to medical school. 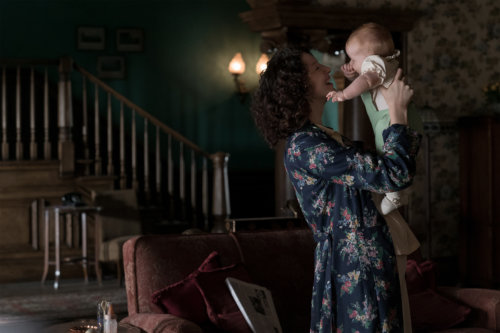 At school, another Prof. Stuffy-Shirt is less than thrilled to learn that their new medical school class includes “a woman and a negro.” Her fellow white male students (future Stuffy-Shirts-in-training) are less than thrilled and prove it with disdaining looks or the body on the table for anatomy class smells really bad, it’s hard to tell. Fortunately, the negro in question, Joe Abernathy seems a decent sort and he and Claire bond instantly.

Erica: “Surrender” is a good title for this episode which transitions into some key, character-defining moments. What do you do after the love of your life dies? Jamie is in mourning since Claire, the baby and everyone he knows basically died, but Claire has baby Bree to pull her through.

Alicia: Kick me right in the feelz episode two. Geez. Fergus all yelling at Jamie for hiding out and not really being there, Fergus losing his hand, the moment Jamie has with Fergus and Fergus going “oh, there you are my lord” Ian Sr. all – I just lost a leg, Fergus just a hand, but you lost your heart  Frank all “when I’m with you I’m with you, and you’re with him”, Claire passing the bagpiper on the bridge AAAAAAAAHHHHHHHH!

Erica: Anyone who thought there wouldn’t be any sex in the show while Jamie and Claire are 200 years apart are so wrong! For people who don’t like Claire because she cheated on Frank, will they be rooting now that she’s cheating on Jamie?

Alicia: Right? Also, Jamie has now cheated on Claire so…(and I’m sorry people we all know it happened so don’t try to fool yourself just because we didn’t have to watch it).

Erica: I also wonder what kind of conditioner Jamie uses since his hair is still thick and fabulous even though he’s been in a cave for years. I must get me some! 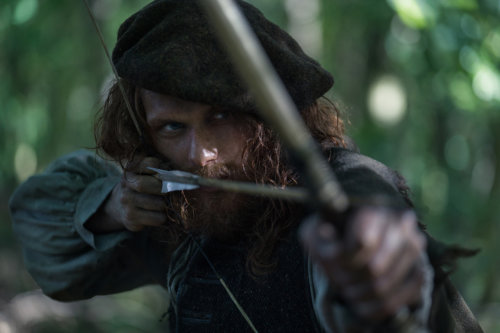 Alicia: Can we talk Jenny for a moment? She was great at the end of this episode. All that anger and heartache on her face. I get it. Six years they have spent hiding him, going through searches and arrests and day to day fear, and for what? For him to just wind up in British hands anyway? And at his own request? I’d be downright pissed as hell too.

Erica: And, geez, not guilt for her at all. Sending her brother off to prison again. Nope. She won’t remember this at all. Frasier = stubborn as rocks.

Alicia: Also, Claire’s daydream – or nightdream since she’s in bed but awake – yowza! How on earth did Frank not hear all that panting? I get you Claire. I’d be having mini orgasms remembering that too.

Erica: Jamie’s cave is quite the lair. I always pictured something more cramped. I also pictured the hat actually covering all of his hair. He’s still Red Jamie at a glance.

Alicia: Yeah, and for some reason I always pictured closer to the house, but this makes much more sense, lol. Again, we lose some of that Jamie wit and charm that’s in the books vs. the show, esp. the moments with the younger boys. I think I finally have to separate them fully: there’s book Jamie and show Jamie. Not in a bad way but book Jamie is a lot more witty and playful, show Jamie is a lot more serious and sensual.

Erica: Well some of that has to do with needing to be really efficient in TV. Again, Ron Moore originally wanted to spread Voyager over two seasons so we’ll get fewer scenes that show sides of his personality. Hopefully Sam can find ways to inject this, but these aren’t the episodes to do it.

Alicia: Also, interesting the way they are doing the storytelling. Instead of it all being Claire relating it to Roger and Bree, in flashbacks. Even some of Jamie’s story (though pretty close to the book) was told as it was related to Claire, Bree and Roger – like Fiona telling them the story of what happened to the Dunbonnet and him going to prison. I don’t dislike any of the changes, it’s kind of interesting to see it rather than just “hear” about it.

Erica: Yep. I think that goes back to being more economical on what they show. However, they also snuck in Jenny’s goal of match-making Jamie which means, (groan!) Laoghaire is on her way. I know they tried to give her a redemption arc last season so let’s see if they can pull this off. I think most will want to gouge her eyes out regardless…

Alicia: Blech Laoghaire. Blech, blech, blech. Not even that woman at the estate he winds up at makes me see red as much as Laoghaire. It’s his one unforgivable sin as far as I’m concerned. Seriously any argument I had with Jamie would end with “Well at least I didn’t sleep with Laoghaire!” Grrrrrr…

Erica: And now we’ll finally get to meet John Grey!!!

Here’s what’s up for next week’s episode titled “All Debts Paid”:

In prison, Jamie discovers that an old foe has become the warden – and now has the power to make his life a living hell. Over the years, Claire and Frank both put their best foot forward to share a harmonious marriage, but an uninvited guest shatters this illusion, bringing their differences to light.