#Droughtlander is over! And boy is it over. What a way to kick off the season right? This season, we’ll be having our own Outlander drinking game with a different focus for each episode. Raise a dram, sip some hot chocolate or munch on something delicious every time…you want to soothe Jamie’s brow.

(We were going to say raise your glass every time someone gets injured, but we don’t want to get anyone blind drunk with the Battle of Culloden.)

We’ll announce a new theme on Twitter right before each episode airs so we can all play next week!

Now, let’s jump right to it! At the end of last season, Claire went back to 1948 to save the baby she was carrying and Jamie headed back to Culloden to die. (Major bummer.) 20 years later, she returned to Scotland and discovered that Jamie survived Culloden. What?!?!

It’s a grey, snowy night filled with carnage. The battle of Culloden is lost and there’s a delirious, half-dead Jamie, half-buried on the field. (Drink!) Flashbacks show the absolutely frustrating ways Bonnie Prince Charlie and his advisors refuse to listen to reason, and Jamie’s resignation to fate. (Drink!) 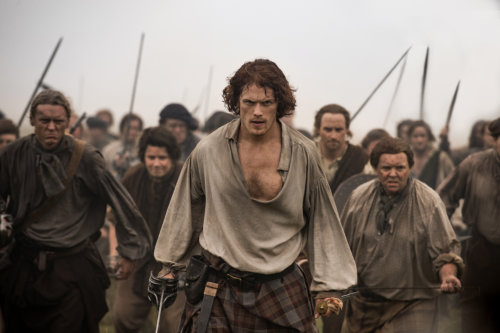 The highlanders gather for a desperate charge and, out of the chaos, Jamie spies Captain “Black Jack” Randall. It’s all come down to this. Finally, we’re getting the fight we’ve all been waiting for: MORTAL COMBAT!!! 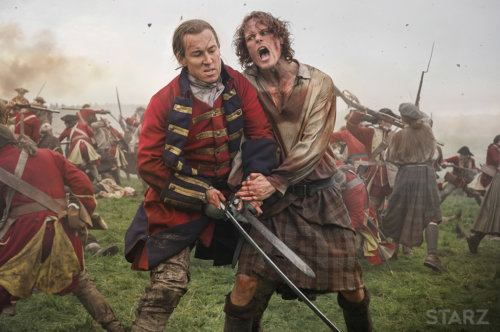 Jamie and Black Jack go all out since this is for all the marbles. It’s a visceral danse macabre, and ends with Black Jack slicing Jamie’s thigh (Drink!) and Jamie stabbing Black Jack in the gut (ok, that deserves a celebratory drink). They both collapse and Black Jack’s corpse half-buries Jamie who’s too weak to throw him off. (Drink!) All the heartache Jamie’s been through – watching Claire leave, watching his men die on the battlefield – and his final moments are in Black Jack’s arms? That is soooo not right.

Jamie’s at peace since his wife and child are safe, the Lallybroch men are safe and he’s about to die. (Drink!). He dreams that Claire has come for him when it’s really Rupert MacKenzie who drags him off to save his life. Jamie just wants to stay and die. A guy can’t get a break. (Drink!) 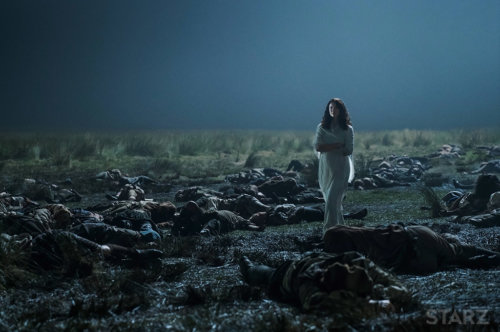 So the surviving Scots flee and hole up in an abandoned building. The English eventually find them and take them out, one by one, to execute them. Lovely. Jamie’s thrilled though – he’ll end the torment of no longer having Claire by his side. Cue violins. (Drink!)

Pirate Rupert (who somehow managed to find a fine eye-patch before the battle) is the soul of Scottish honor as he rallies his fellow Scots until the end. He gives his name to the English for their meticulous records and then heads outside to be shot. NOOOOOOOOOOOO! (Drink! Drink! Drink!)

When it’s finally Jamie’s turn, Lord Melton recognizes him as the notorious Red Jamie, a wanted criminal and the man to whom his family owes a life debt, courtesy of his younger brother. Remember that young English soldier who tried to stab Jamie? Jamie stopped him and tried to scare him into confessing the English troop movements. The kid held stubborn, but then Claire faked being a hostage and he confessed to save her honor. Jamie let the kid (John Grey) go and the kid promised he’d pay back the debt and then kill Jamie.

Lord Melton can turn in the scoundrel Red Jamie for big points with his bosses, or pay off the family debt. That grand and glorious sense of English honor wins over the opportunity to advance and he sneaks Jamie out. Jamie can’t catch a break. What’s a guy gotta do to get himself killed? (Drink!)

Jamie passes out on the journey and wakes up at Lallybroch. His sister, Jenny, and her husband, Ian, are happy to have him home. Too bad he’s still bleeding like crazy. (Drink!)

Meanwhile in the future, or present, or days of future past (see what we did there?), it’s 1948-ish and Claire and Frank are in Boston to start a new life and salvage their marriage since Claire is preggers. 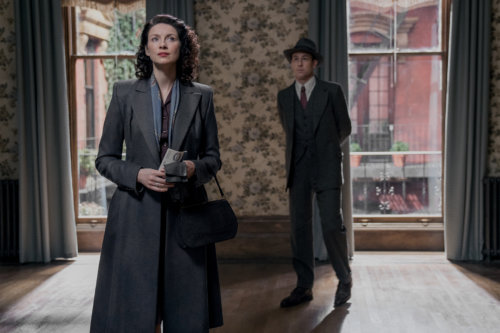 At first, things seem good in an uncomfortably strained sort of way. Frank is settling into his new job at Harvard, but Claire is finding the constraints of being a good little housewife quite grating. Plus she still can’t stand Frank’s touch. She’s sort of trying to make an effort, but poor Frank! 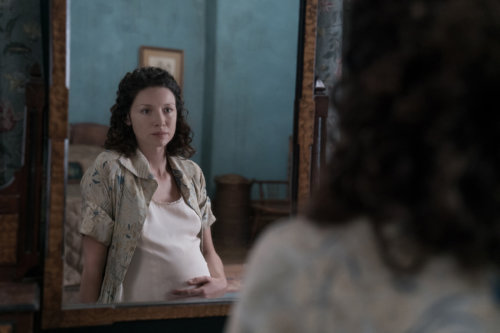 Things aren’t helped when they go to a work party with Frank’s colleagues and Claire opens her liberated, female mouth. The stuffed shirt, misogynistic, ultra conservative professors believe she should just look pretty, have babies and not speak out. Needless to say, that does not go over well with Claire. Hard to believe, but she had more freedom 200 years ago. Frank tries to be supportive, though, bless his heart.

The inevitable explosion between them happens. They seem broken beyond repair when Frank gives her an ultimatum. But then Claire goes into labor! At the hospital, Claire wants to have a voice in her medical treatment but the stogy, old, male doctor decides what to do with her body and knocks her out. (Drink! No it’s not a Jamie moment, but we need one anyway.)

When Claire wakes up, she flashes back to her devastation to waking up after Faith’s stillbirth. (Drink! See previous drink excuse) Then a beaming Frank walks in with Brianna Randall. So much joy! While everyone is a mushy pile of happy goo, Claire and Frank agree to a fresh start. Tears of laughter! 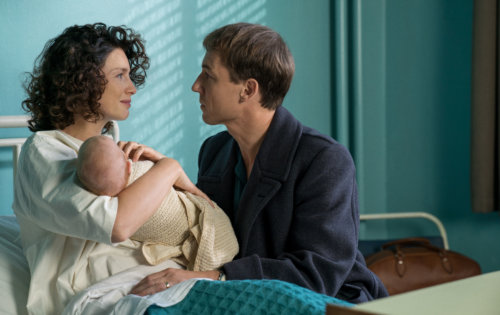 Then the nurse asks where did the baby get her red hair?
Everyone stops laughing.

(We kind of want to slap the nurse’s tactless face.)

Alicia: Poor Jamie! Can’t a guy just die on the battlefield in peace? I mean how cruel fate is!

Erica: Nothing goes right for that man! The image of him and Black Jack side by side! *Shivers* 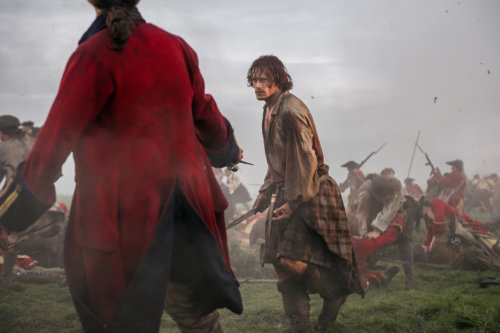 Alicia: I kind of don’t like Claire in this one. I get it. Jamie is the love of her life, her soulmate, but still.

Erica: Well, it’s more than just losing Jamie. It’s losing her whole identity, voice and power. Since she was a combat nurse, she’s had a voice and responsibilities that gave her purpose. Now she’s struggling with a gas stove. It’s a whole new world for her and it pretty much sucks.

Alicia: Frank is trying and to a point he’s being patient. Can’t really blame him when he loses it a bit.

Erica: Nope. He wants a wife and has to settle for a roommate. It sucks for him, too.

Erica: This was a rough one. With Rupert’s death (as The Princess Dairies says: King Rupert, may he rest in peace!), that’s basically it for all the MacKenzies that we’ve grown so fond of for the last 2 seasons. Sadness. Also, goodbye kilts! But, yeah, Sam was great!

Erica: This season should be interesting since Claire and Jamie are in different places. We’re so used to seeing them together, it’ll be odd to see Outlander with them apart!

Alicia: Ok. So they didn’t give us Jamie’s blink/wink and now they aren’t giving us his broken nose? I mean it’s so prominently mentioned throughout the rest of the series! Are they going to forget his broken fingers still, too?

Erica: I think they are so focused on aging them, we probably won’t see all these injuries. I’m curious to see what 1768 Jamie looks like!

Alicia: However, they did stick pretty close to the book in terms of Jamie’s recollections of the battle and afterward. Once again, they stray from the book when it comes to Claire/Frank, and once again I like it! We only get these little glimpses in Claire’s retelling in the book, so I love the fact that the series is giving us a clearer picture. However, I’m wondering if we will get some of the scenes after Bree’s birth because it seems they used them in different ways for this episode.

Erica: I’ve always thought it was a smart idea to play up Frank a bit since it gives Claire more conflict on leaving him and it gives more meat to the 20 years they were together. Also, Tobias is great.

Alicia: Wonder if we’ll get the nursing scene? Eeep!

Erica: This is Starz so it may happen! Originally Ron wanted to split Voyager over two seasons so it will be interesting to see what they keep and what they add in.

What did you think? Was this a satisfying end to #Droughtlander? What did you like/not like?

Next week’s episode of Outlander is titled “Surrender” — gulp! Here’s the full description:

“Hiding in an isolated cave, Jamie leads a lonely life until Lallybroch is threatened by redcoats pursuing the elusive Jacobite traitor known as “Red Jamie.” Back in Boston, Claire and Frank struggle to coexist in a marriage haunted by the ghost of Jamie’s love.” 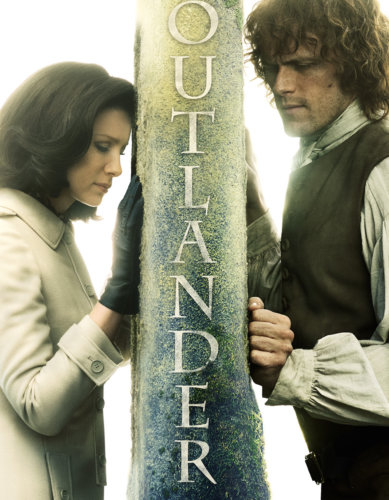