This week is all about Claire as….

After hitting a dead end in the search for Jamie, Claire and Bree are back in Boston trying to resume normal life. Claire is slicing and dicing people (she’s a surgeon), Bree is attending (and failing) university and the two are fighting. Totally normal. 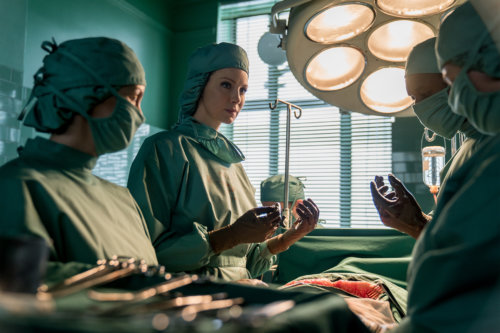 It’s almost Christmas and Roger has unexpectedly invited himself over to Claire’s for the holidays. He lands in Boston and interrupts the latest Claire/Bree throw down. Seems Bree’s decided to move out of the house. Where and with whom we don’t know, but she’s “Hi Roger, bye Roger.” Is Bree playing hard-to-get or what?

It’s not a total loss for our Roger, though, since he wants a moment with Claire so he can tell her “I found him.” (Heart stop!) Roger has found a book with a quote Claire taught Jamie by Robbie Burns (aka the bard of Scotland’s) who hadn’t written the line yet because he was only 6 when the book was published. Oh, it’s also printed by “Alexander Malcolm” –a couple of Jamie’s middle names. If their rules of time travel are correct, then it was printed a year ago in Edinburgh in Jamie’s time. As tempted as Claire might be, however, she can’t leave Bree alone in the world. She dismisses the information and asks Roger to keep it from Bree.

Meanwhile, Joe has friends with really odd hobbies since they send him a skeleton for analysis. This is before CSI, ye ken? Claire picks up a bone and muses over why his (odd) pal is so concerned about a 150 year old murder victim. Joe is astounded by how accurate her diagnosis is without any examination. Freaky skills, Lady Jane!

Bree is showing Roger around Harvard and declares she doesn’t trust history. Since they are both historians, that’s not such a great thing. They join Claire for a Harvard tribute to Frank when Candy/Sandy/Frank’s mistress tells Claire she didn’t deserve him and she’d give anything for one day with him. 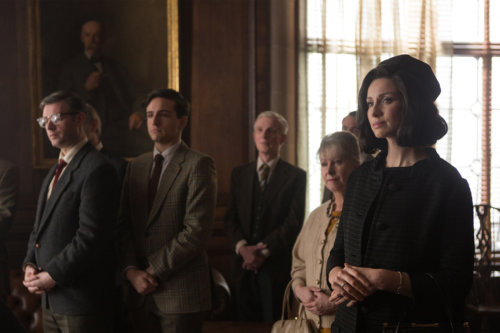 After the event, Bree inquires after Candy/Sandy/Frank’s mistress. Claire fesses up about Frank’s infidelity. Claire reassures Bree it’s not her fault and that Frank loved her as his own, and that Claire loves Bree for her own sake and not just because she’s a part of Jamie. (Sniffle) She also confesses Roger found Jamie. 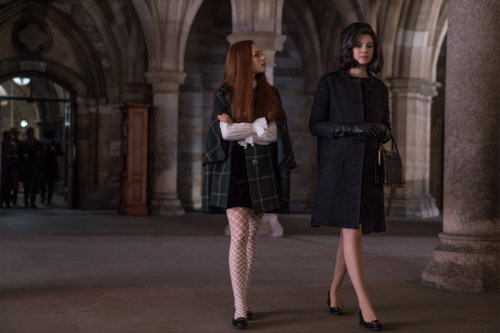 Claire’s still not convinced she should go. Bree suddenly gets really mature and selflessly urges Claire to go because Claire once gave up Jamie for her, so now it’s time for her to give up Claire for Jamie.

With permission given, Claire decides to go back, but this time, she’ll go prepared! Roger and Bree find antique coins which will be the current currency in 1760’s Scotland. Roger gives her a book on Scottish history and Claire grabs some medicine and equipment from the hospital (penicillin anyone?). Now she needs to create period dress to hide all this stuff — she’ll be just like Batman and his utility belt.

Cue a cosplay montage to the soundtrack of the Batman theme song!!

Claire bids a tearful farewell to Bree and Roger and heads to Scotland alone. (We are soooooo out of tissues…..) 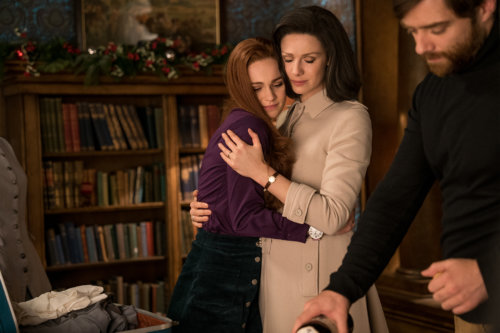 Bree holds it together rather well, and cozies up with Roger to give him some American Christmas memories. 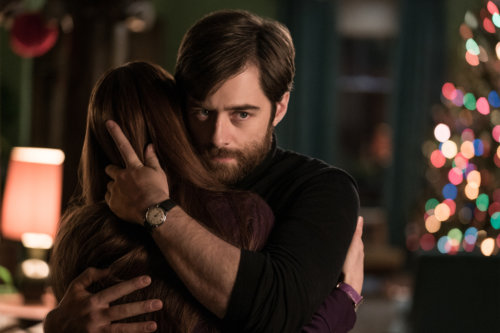 Claire is back in 1766 Scotland and it’s like she never left. She stops a local boy and inquires about a print shop and is directed to A. Malcolm. She heads inside the empty shop to hear a voice call out “Is that you, Geordie?”

OMG! It’s Jamie’s voice in the next room!

Erica: This is my favorite episode of the season. It really had all the tough emotional moments for Claire down right.

Alicia: Hmm…so far my least fave of the season, mostly because I just can’t connect with Bree. Don’t get me wrong, Claire had me pulling the tissues out, but Bree…meh.

Erica: Yes, I agree. It’s a pretty big about-face when she let’s Claire go. But I love this episode for Claire, despite Bree. I must say that the Batman montage was unexpected and hilarious! It’s a great tribute to the wardrobe department who has such an insane amount of work to do on this show!

Alicia: I giggled so much during that. Also, because I like to sew costumes, I kept wondering where she’d get the pattern in 1968 because I feel they weren’t all that concerned with accurate historical costumes at that time. LOL. Also, Roger watching Dark Shadows is the best! Hence why I <3 Roger!

Erica: The print shop!!! Now non-readers now know why we’ve been freaking out about this scene all season long. I think it was great.

Alicia: YAAAAASSSSSSSS!!!! Jamie fainting is one of the top moments from the books for me. You expect him to turn, see her and they rush into each other’s arms, but no. He faints. Best scene ever! They did an amazing job with this.

Erica: I love how and some of my favorite lines from the book made it onto the screen this week.

Alicia: I know! However, they missed so much of the emotional oomph for me by having it all take place in Boston and not in Scotland. I mean Bree is at the stones with Claire and essentially is all “If you don’t go through I will because someone needs to tell him…”. That’s a big deal. Emphasizing that she and Roger can hear them too.

Erica: They did hear the stones when Gellis went back so that’s been established already. I’m so glad they put the first part of the print shop into this episode! It’s such a great reward for Claire’s tough decision.

Erica: I know! There are no commercial breaks on Starz so this the best way to get that pause after Jamie thuds on the ground. Such a smart choice!

Alicia:I’m finding the changes this season bother me more than in earlier seasons. Don’t know why, they just are. I’m still obsessing over Murtagh being alive and what that means for the future of the series and some poor character who probably won’t get air time b/c Murtagh will take their place.

Erica: It’s hard to say what this means since Willie also went to the colonies when the actor wasn’t available. They had to kill Angus instead and he got such a noble death (sob!). But next up is Mr. Willoughby and I’m bracing for impact since he makes me cringe. Maybe the show can find a way to make him less offensive.

Up next is Episode 6 “A. Malcolm” (which doesn’t air until Oct. 22nd … aaaaaaaaahhhhhh):
After decades apart, Jamie and Claire finally reunite and rekindle their emotional and physical bonds. But Jamie’s new business dealings jeopardize the couples’ hopes for a simple life together.

**Also, keep a look out tomorrow for a special announcement from Lot18! Here’s a wee teaser: