7 Saturdays until the end of Droutlander! We’re in the home stretch and we’re getting plenty of treats to count down the days until April 9th!

First came the news that Sam Heughan will be this year’s Grand Marshall at the NYC Tartan Day Parade on April 9th!

Yes, NYC is so excited for Outlander’s second season that they are throwing a parade! (Not really, but it feels like it!) There will be tons of Outlander fans marching proudly in NY on April 9th.  To raise funds for Cahonas Scotland, Heughan’s Heughligans (love these ladies!) are selling shirts with Jeffrey Moy’s adorable Chibi Jamie to mark the occasion.  Order fast since they are going to print soon! 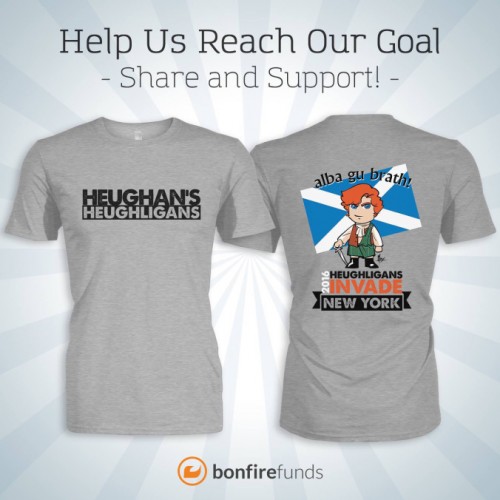 Last year, Graham McTavish lead the parade, this year it’s Sam so expect another MacKenzie on the throne next year. (Hello Richard Rankin!)

Outlander finally got the cover of Entertainment Weekly! The Outlander issue should be hitting stands any day now. (EW subscribers got their copy over the weekend.) 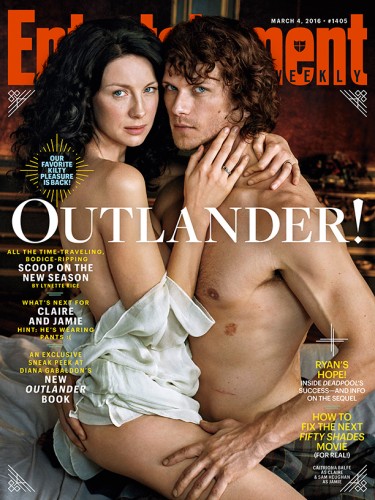 And now Starz has released the official Outlander season 2 poster!  Fans of Ron Moore’s Battlestar Galactica may see some echos with recall the amazing “Last Supper” poster for the final season. 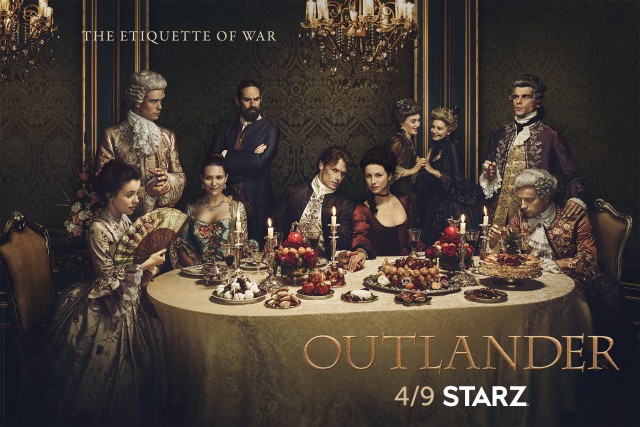 Clearly season 2 is going to different places than season one!

The world of “Outlander” is incredibly different from book one and the new key art celebrates those differences. Whereas the first installment’s art was set on a hillside of the rugged Scottish highlands, this new art invites us in to the opulence and intrigue of 18th century Parisian society.

The key art depicts Claire (Caitriona Balfe) and Jamie (Sam Heughan) surrounded by (left to right) Mary Hawkins (Rosie Day); King Louis XV (Lionel Lingelser); Louise de Rohan (Claire Sermonne); Murtagh (Duncan Lacroix); Le Comte St Germain (Stanley Weber) and Prince Charles Stuart (Andrew Gower). Claire and Jamie are attempting to change history, by stopping the battle of Culloden, through flattery, manipulation and politics. The Frasers are fighting this war – not on the battlefield – but in the courts of King Louis. While the original image was about Claire and Jamie being thrown together, this new art shows them united in their mission, fighting for their future together and the fate of Scotland itself.

The key art was shot by photographer Jason Bell.

The second installment of “Outlander” begins as Claire and Jamie arrive in France, hell-bent on infiltrating the Jacobite rebellion led by Prince Charles Stuart, and stopping the battle of Culloden.  With the help of his cousin Jared, a local wine merchant, Jamie and Claire are thrown into the lavish world of French society, where intrigue and parties are abundant, but political gain proves far less fruitful. Altering the course of history presents challenges that begin to weigh on the very fabric of their relationship. However, armed with the knowledge of what lies ahead, Claire and Jamie must race to prevent a doomed Highland uprising and the extinction of Scottish life as they know it.