It was a crazy weekend at Wizard World Comic Con Chicago with the cast of Outlander and author Diana Gabaldon. But attendees know, the drama started the week before.

Last December, Wizard announced Sam Heughan and Caitriona Balfe would make their first visit to the Midwest at their Chicago show. Immediately tickets started flying off the internet. Wizard added Richard Rankin, Sophie Skelton, Graham McTavish, Lotte Verbeek and Diana Gabaldon to really seal the deal. Many folks were traveling far. Many folks were attending their first con. This was A Big Deal.

Then the drama — one week before the event, Wizard announced Caitriona changed her dates from Saturday and Sunday to Thursday only. Sam was appearing “virtually” (?!?!) and detailed here: 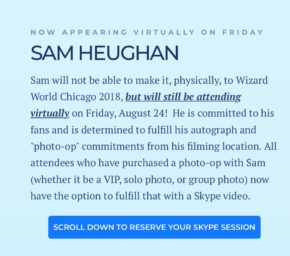 Wizard offered up some additional upgrades to accommodate these changes and the rest of the Outlander guests re-arranged their travel so fans could still get cast photos (without Sam) on Thursday.

Result: massive chaos as fans tried to re-arrange travel, puzzle out what this Skype would entail and, in some cases, cancel travel. With one week to go, this wasn’t a lot of time and there were tons of financial penalties. Ouch.

In a sample of around 1000 fans from a passionate Facebook group, around a third took the compensation package. Of the people who asked for refunds, some still attended, but others skipped the weekend altogether. This is the third con in recent months that Sam has skipped out on (due to film commitments) so he’s starting to get a reputation. Sadness.

Thursday was disorganized as Wizard had to open hours earlier to try to squeeze in as much Cait time as they could. With Outlander group VIPs, Outlander trio VIPs, Outlander dual VIPs, Caitriona VIPs, other VIPs, silver VIPs and general admission, every Outlander session had to prioritize a bewildering amount of lines. Cait is always game for anything so fans enjoyed the brief time they got with her.

VIPs who did not take the refund for Sam’s virtualness, got a 15 second one-on-one Skype with Sam. (Basically enough time for a greeting and a comment.) Most of them were content with their moment since they felt it’s their one and only chance to meet him. Non-VIPs got a 15 minute Q&A in “small groups.” I didn’t get feedback on these sessions, but each group was 100 people so it wasn’t really the same as a photo op. Ouch.

By the time the rest of the cast and Diana returned for Saturday, Wizard was ready for the mass of Outlander fans which kept the autograph and photo ops busy. 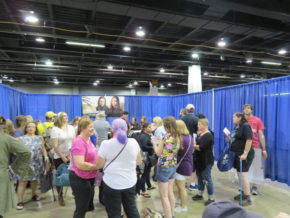 Many fans cited the panels as their favorite parts of the weekend.  Here are some paraphrased highlights from this weekend!

SPOILER ALERT FOR THE SHOW AND THE BOOKS!!!! 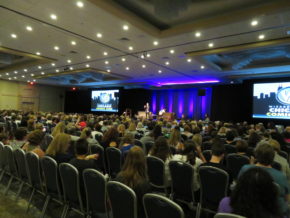 Diana: They don’t work out as much as Sam

Richard: I fucking do!

Diana: There are many riveting scenes for Roger in the second half of season 4 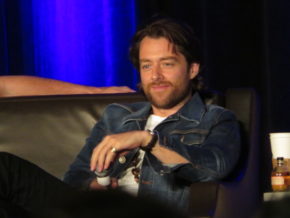 Graham: Outlander is one of the things I’m most proud of 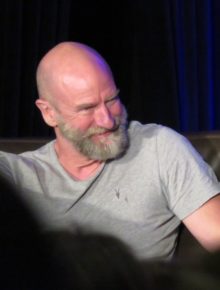 Lotte: Thank you fans for posting all the info since I didn’t have time to read all the books 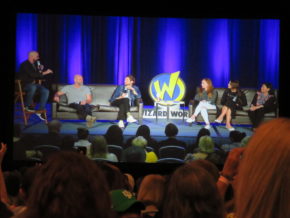 On their favorite costumes:

Lotte: I like the blood costume the best. Easy to slip into. Hard to get out of.

Sophie: The tartan poncho with white tights. Or the black outfit at the funeral which is similar to something Jamie wore in the episode, showing they have a connection. Terry is a genius. (Terry Dresbach = costume designer) 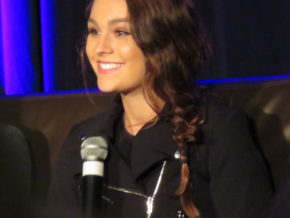 On what they do in their spare time to relax

Lotte: I like poles. I may dance with them

Richard: (Looking around) Do we have one here?

Lotte: Maybe Geillis does a dance in the future scenes.

Richard: (as Roger) Granny? (Looks sideways) What are you doing?!?!

Diana: if you’ve read the 4 million words I’m written, you know what I can do 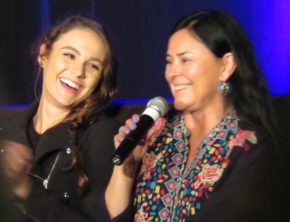 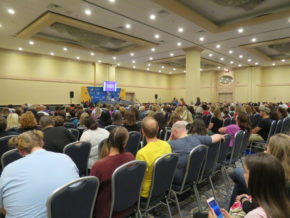 To get through writer’s block: read more books

A good sex scene should be an exchange of emotions not bodily fluids. The dialogue is very important.

New book, Go Tell the Bees I’m Gone, will be out some time next year 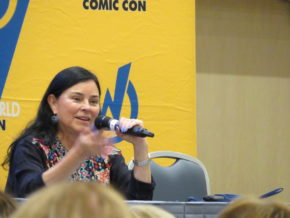 The actors don’t resemble my characters at all. Well Sam does. Sort of. The real Jamie’s hair is better. 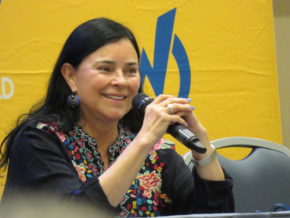 Graham: I would definitely come back. Maybe Dougal faked his death and is living like a hermit in a cave somewhere 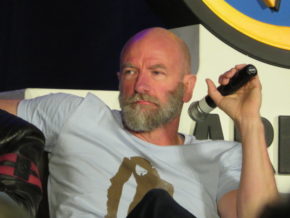 Graham: (Shakes head in disgust) I’m going back to my cave. 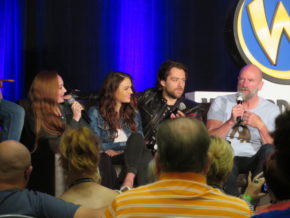 Scenes they wished were in the TV show:

Richard: The towel scene between Roger and Bree.

Richard: You may have misunderstand with my accent. I said  “trowel.” They were gardening…? 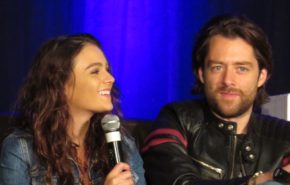 Asked about favorite lines that could be made into shirts

Graham: (looking defeated) Grind corn…I had no idea. We just tried a little line by this lake.. 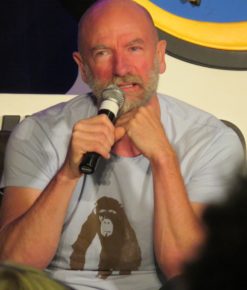 Does Lotte and Graham wish we’d seen Geillis and Dougal together?

Graham: Even a cuddle would have been something

Lotte: I feel you are more hesitant after finding out about our son. You were different in NJ. (The last time they saw each other)

Richard: I image it would be very bloody 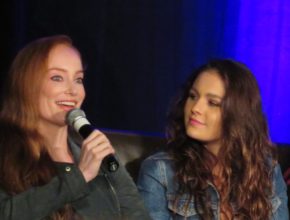 What they would save from burning building

Richard: My PC…and if I have time my desk…my headphones

Graham: Photographs that I can’t replace.

Graham: Oh yes. My diary too. Just the ones we don’t want to be found

Sophie: Pearls that have based down through family

Graham: Yes! My pearls too! 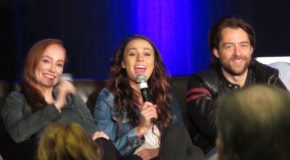 A fan says Roger can be the prince of men.

Richard: It’s a compliment…but is it? Emmm….Sounds second best. Maybe prince of bastards 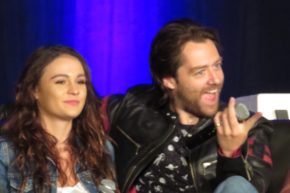 The advice they would give to their characters:

Richard: Stay away. Far away!

Lotte: Not the fifth one (rolls eyes) 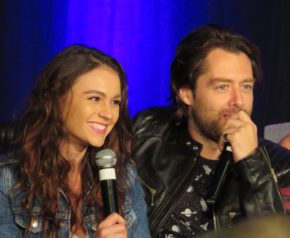 And that’s it for the panels! I’ll recap more about Wizard World Comic Con Chicago including all the Outlander cosplay and some antics between Richard and Sophie!