While we wait for the second half of Outlander’s first season to begin on April 4th, we have a special gift for the holidays! Heughan’s Heuligans continues their heroic efforts to raise money for Sam Heughan’s charity Leukaemia & Lymphona Research (LLR) with a new shirt featuring Comic Jamie (aka Chibi Jamie)! 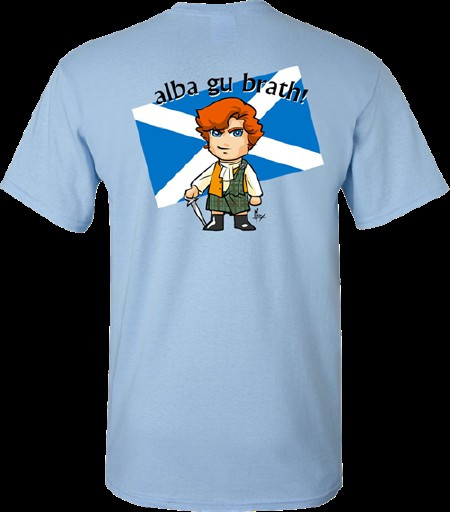 A few months ago, I asked my friend and artist Jeffrey Moy to create a sketch of Sam Heughan as Jamie Fraser. Jeff is a terrific artist who’s worked on a lot of comics (Legionnaires, Star Trek: Voyager) and video games (X-Men Legends, Ultimate Alliance, Star Wars: Jedi Knight Outcast, etc…) and can pretty much draw anything. He’s also a big fan of Ron Moore so Outlander was certainly a show up his alley.

This little guy was a big hit on Twitter with folks from around the world giving him love and asking for t-shirts. The Heughligans thought the same and they reached out since they were looking for more fund raising ideas. They asked if Jeff would be willing to design something for them and, being the swell guy that he is, he agreed!

Jeff and I toyed around with a couple of ideas for the sketch. I suggested the flag and inscription Sam signed on my Outlander poster at San Diego Comic Con. (“Alba gu brath” is Gaelic for “Scotland forever.”) The end result is an adorably fierce image that celebrates Scotland (and smirking). 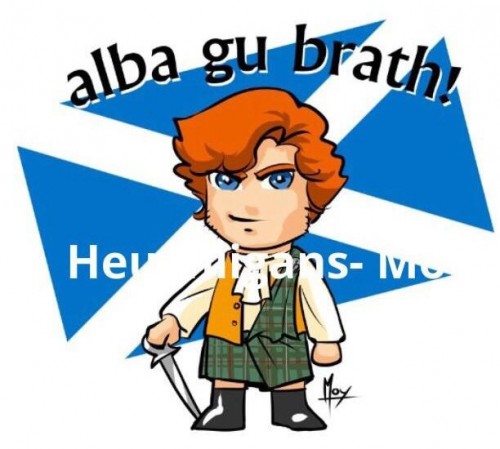 Yes, this definitely goes on a shirt!

One of the Heughligans, Kendra Selby gave Herself, Diana Gabaldon, a signed print from Jeff and she liked the little guy as well! 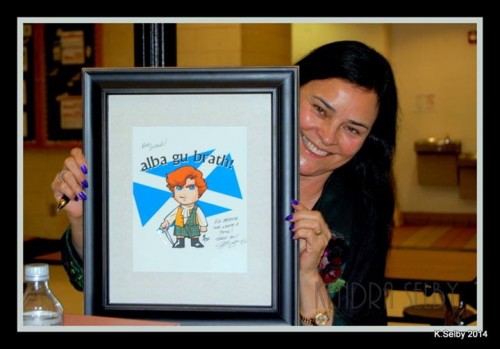 So here’s the link to snap up one of these shirts! They need to sell a minimum amount of shirts in the next two weeks (or they will refund everyone). It’s for a great cause, looks adorable and makes a great gift for the holidays…

Oh, and if you want to see more of Jeff’s work (or get a print of the sketches or have him draw you one), here’s a link to his artblog so you can see his other work. He’s also drawn Claire and I keep hoping he’ll do more Outlander sketches. (Imagine Black Jack Randall! The wedding! ) So head to his website and throw in a comment or two! 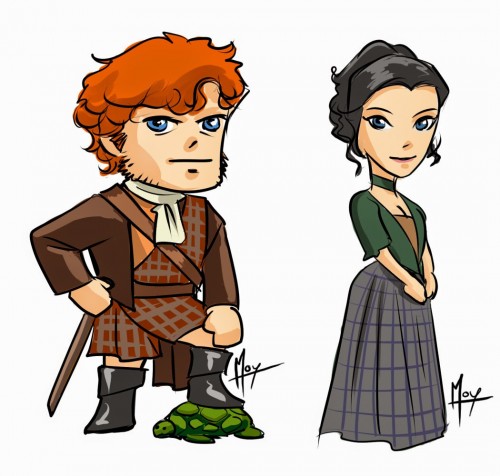 In other news, I’ll be doing a mini-Outlander giveaway contest well before April. Keep an eye out for that! And then The Novel Strumpet and I will resume re-caps and contests when Outlander picks back up at Starz in April.