Well, looks like sweet family time is over for the Fraser’s as Jamie heads out with Knox to track down the Regulators, Claire decides she should create modern medicine in a time where you could be imprisoned for some of the efforts she’s making (if not burned as a witch), and Roger and Bree already start to have cracks in their union (but with these two it was only a matter of time right?).

So here are the things I got from this episode:

Claire  – Disease vs. Cure – which will kill you faster? 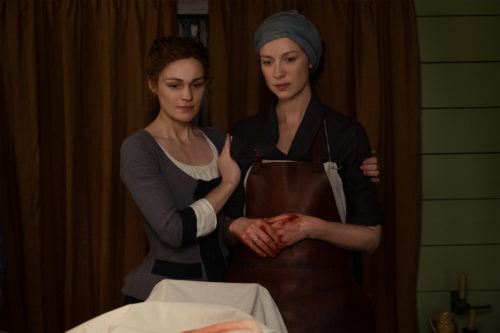 Claire has always walked a fine line when it comes to the 18th century and her 20th century medical knowledge, but she may be going a bit too far now.  I mean an autopsy?  This is an era where you do not ‘violate’ a corpse and doing so is a very serious offense.  In the past, it was mostly only herself or Jamie she was putting in danger, but know she’s drawing other people into her schemes.  Bree and Roger make sense, they get it and are familiar with what she’s doing.  But Marsali?  Logical choice – yes – however, this a woman who has been born and raised with 18 c. mindset.  Kind of wondering if Claire has gone too far this time in her need to bring modern medicine to the past.

However, can we fault Claire since she now has more than just herself and Jamie to worry about?  She has an entire family and a growing number of patients to worry about.  Desperate times may call for desperate measures, and if she seemed to be behaving rationally I’d feel a little more sanguine about it all, but she’s doing things to call outward attention (like molding food to make penicillin) to herself so she’s being a bit reckless in my humble opinion.

I mean how are they going to cover up the smell if the body is still in the house?  I don’t care that it’s in a basement, that scent travels far and fast.  How will they eventually get rid of the evidence?  There are people all over the land around the house.  How is she going to explain to people that mold can cure their illness?  Sticking to folk medicines they know is fine, but to create one out of the blue?

This is either going to go very well or very bad.

Roger and Bree – The Honeymoon is Over

Am I concerned that Roger doesn’t really have skills needed in this time to provide for and protect his family?  Yes.   Am I concerned that eventually Bree and Roger will have a huge fight over the decision to either stay in the 18th c. or go back to their time? Yes. Are these my main concerns?  No.

Brianna’s pre-occupation with Bonnet is the real concern.  Her drawings of him which escalate in grotesqueness speak to a mind and soul that is not well and Roger knows it.  That scene where he’s standing on the porch trying to share in her joy over Jem’s first steps, trying so hard to smile and hide the mental anguish he’s in knowing the woman he loves is being haunted by a specter that is very real and very much a threat to them all – ugh!  How do you approach such a subject with someone who obviously is trying so hard to hide how it is affecting them?  But how do you not confront them about it when it’s so obvious how it is affecting them?  This is a landmine that I’m not sure the two of them have the foundation to navigate without it blowing everything apart.

Wow, that escalated quickly.  We got the sense he’s a little more enamored with the whole ‘for Crown and Country’ than other people but that scene at the tavern where his concern over killing a prisoner flips so suddenly to his rationale that he actually gave the man an honorable death and that he didn’t deserve that much…eeeyikes.   Zealots are some pretty dangerous people, especially when they justify their actions as being righteous – whether that be for God or King.  He is going to be real trouble, and I’m not sure that all of Jamie’s clever politics will be able to help him here.  Knox is not a man who can be reasoned with unless your reasoning matches his own rationalizations.  He makes me extremely uncomfortable.

Of course, you have the beginnings of the same in Murtagh’s camp as well.  Men who are starting to believe in their righteous cause over tyranny and believe the ends justify the means.

Jamie’s not caught between a rock and a hard place, he’s between two giant mountains and both are about to avalanche. 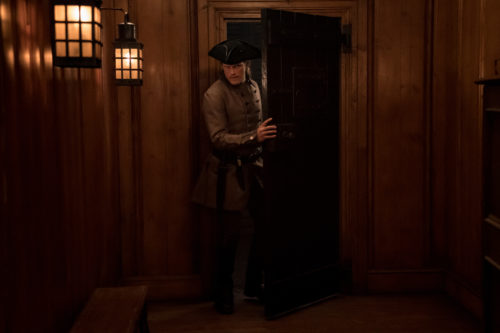 Stephen Bonnet – The Devil is a father

I’m still trying to decide if he’s a psychopath or a sociopath – but definitely leaning toward the first.  Like Black Jack Randall I’m on edge whenever he’s on the screen.  You just know something is going to go very wrong, you just don’t know when.  It was surprising that he didn’t kill the man he was dueling, but that parting shot about how he’s got to be more respectable because he’s a father now.  DANGER, DANGER, DANGER!  Seriously that sent a chill up my spine.  It still sends a chill up my spine.

Jamie and Murtagh – The road is paved with good intentions

This is going to end badly.  We all know it.  The question is how and when. I feel these two are going to be our representation of the growing tensions and ideologies between rebels and loyalists.  Not that Jamie is a true loyalist, but he knows that he needs to buy some time to ensure that everyone at Fraser’s Ridge is ready for this battle.  Murtagh, on the other hand, is ready to fight now and has already made himself public enemy #1. The moment Murtagh pledges himself to his men is the moment you know this is going to be horrible.

And on that happy note, let’s end this with a sweet family shot, shall we? 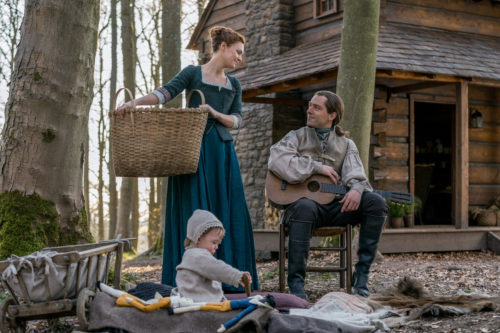 What’s on deck for next week: “Free Will”

The growing Regulator threat forces Jamie, Claire and Roger to embark on a mission to raise a militia.  When one of their settlers reveals he’s a bondservant and asks for help freeing himself and his brother from their abusive master, Jamie and Claire are forced to make a difficult decision.