This whole season there have been questions running in my head about how the show was going to handle certain events in the book and two of those – Roger’s hanging and Young Ian – were finally answered this week!

It was interesting to see how they handled Roger’s memories this episode and I’m still wrapping my mind around it.  The set up for the silent film moving to color was a decent concept but a little odd given Roger was born long after the Silent Film era, however, I get what they were going for.  Given the trauma he went through, he would want to keep the memories suppressed therefore no color, no sound, just disjointed images of the horror. So that when he comes to a turning point, the change to color, to sound, to the nightmarish images moving to a memory of Bree’s face is very poignant.  Outside of all that imagery, it does tell the story of the events very well.  We see how Roger wound up in that situation, we see how he got that hand into the noose which probably saved his life, we see the immediate events following Bree, Jamie and Claire finding him.  For me, the parts with Bree, Jamie and Claire came off a little goofy in that scenario, but once it was just Roger’s memories and the events of the hanging itself it worked better.

Let’s give a round of applause to Richard Rankin for carrying this part of Roger’s story so well.  Spending most of the episode not speaking he still gave a stellar performance and was able to convey so much with just his expressions and actions.  For my part I did hope we’d get maybe a couple of episodes of his silence, but I understand why they had to up the pacing on that and the conveyance to passing time was done in a convincing way.

We now know Roger survived and mended physically, if not mentally, and it was intriguing to start the episode with Roger teaching a history class about famous last words considering that for most of the episode he never speaks.  But to open with him saying he doesn’t care if history forgets his name so long as his loved ones remember him is intruigiuing. After all, here is a man living history, betrayed by his own ancestor and almost forgotten in the past which means he may never have existed in the future. So history may not have just forgotten his name but never known it.

We understand time is passing while he’s struggling mentally and pulling away from those he loves.  We see how patient everyone is trying to be, but also how impatient Bree is getting.  I feel odd saying it, but this is probably my favorite episode between these two because it’s the only one where I felt them really gel as a couple.  Where you feel they really do rely on each other, love each other, and are good for each other.  Mostly because Bree is the only one who would have the spirit to challenge him about pulling away and not fighting for their family.  I hope this is a turning point in their onscreen relationship.

I’m looking forward to seeing what they do with the land grant Tryon gives them as an “apology” for the trauma dealt to Roger and the family.  No, it does not make up for what was done to Roger, but it does give them more land and therefore more of a stronghold in that area.  I mean 5000 acres is nothing to sneeze at. 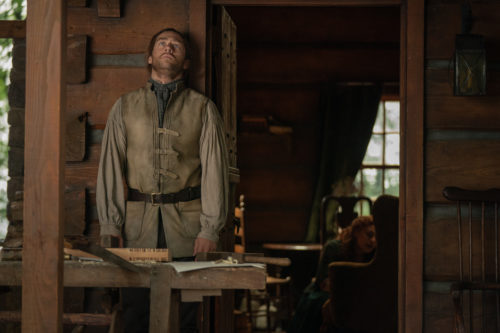 What did you see in the darkness

YOUNG IAN HAS RETURNED!!!!  I’ve been really looking forward to this because I’ve wanted to see John Bell sink his teeth into this character arc and he does not disappoint.  You can feel his tension how removed he is from his family.  You can see how the time with the Mohawk has marked him, both physically with his hair and facial marks and mentally.  Gone is the goofy, awkward young man we all loved and before us is a man of deep secrets and emotions.  Bell plays the change to perfection.

You can feel the unease and longing coming from him.  The unease of being back with family in living in a way he is no longer used to (houses, beds, dinner tables, European manner/customs, etc) and the longing to be connected with them again and yet to be back with the Mohawk.  I’m looking forward to seeing him continue to flesh out this version of Ian.

It really worked to have Roger and Ian together when they work through some of their issues.  Both are now men of few words for their own reasons, but reasons based out of experiences neither can talk about with their loved ones yet.  I like that they have moments of sharing their burdens with each other without having to say a lot.  That they both are responsible for ensuring the other comes back to Fraser’s Ridge (I mean we all figured out it was Ian and not Roger who took the hemlock from Claire’s surgery right?).

Also, let’s just talk about Marsali here for a moment.  It’s hard to tell sometimes if she’s just blindly blathering on about things or if she’s as calculating in what she says as I suspect she is.  On the surface the conversation she has with Ian about her children and at times feeling guilty loving her new family over the family she grew up with is too spot on for me to think she’s speaking that way off the cuff. Also, while on one hand her turning over the hanged man again and again for Roger seems an uncomfortable accident, it also seems like something she’d do to force him to face something he doesn’t want to face.  She’s definitely Loaghaire’s daughter, but uses her powers more for good than her mother did.

And we have to take a moment to recognize that Murtagh is well and truly gone.  Jocasta comes to The Ridge to pay her last respects and she and Jamie have a wonderful moment that demonstrates that family isn’t always about the blood and DNA inside your veins, but about the people in your heart. 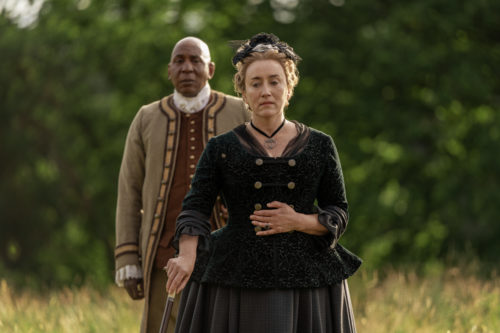 The astrolabe Grey gives Bree and the hanged man tarot Marsali keeps pulling for Roger are some good uses of symbolism.  I’m not a tarot person but from the little I know the hanged man can mean sacrifice, or being suspended in time and that is exactly where Roger is at.

He gave a great sacrifice for his family and now he cannot move on.

Meanwhile, the astrolabe is a navigational tool one can use to tell time and assist an explorer to reach their destination.  For Roger, it can help a man out of his time navigate his way in history, remind him of the time that has passed while he’s been locked inside himself and lead him back to his family.  For Ian, it’s about coming back to a family and world that was lost to him for so long and finding his way back mentally while he is now lost to another world and family.

At least those are my humble interpretations. 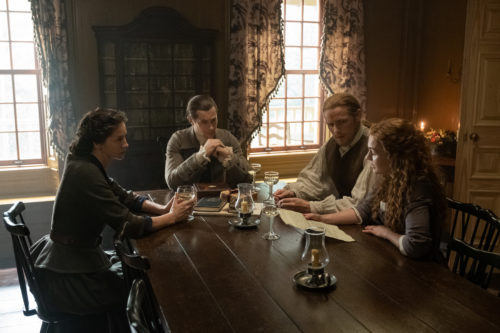 And it goes without saying, but I’m going to say it anyway, that any episode where Lord John Grey appears even if for a hot minute is going to be high on my list.  I’m totally biased and have no shame. A spin-off series with this character cannot come soon enough because I need my John Grey fix.

What’s on deck for next week:  “Monsters and Heroes”

When Jamie is bitten by a venomous snake, Claire fears she may not have the resources to save him; Jamie asks Roger to complete an important task in the event of his death.

Only 4 more episodes before this season ends and I feel there is still so much to get through!