Well, finally we get some quality Claire and Jamie moments.  Ok, maybe not quality, but definitely moments.

Let’s get to my recap and thoughts on this episode:

Things are rotten at Fraser’s Ridge

Bread, fruit, other – Claire is continuing her experiments with mold to find the ever-elusive penicillin strain.  Still teaching Marsali, who is learning the ropes.  While I appreciate the ‘reason out the answer’ teaching approach, it also drives me nuts.  Thankfully, Marsali is a pretty quick study and can answer her own questions rather quickly with this approach.  I find it interesting they’re having these discussions around all the people working on the house, but I guess none of them find it too odd?  And what about the body in the basement?  Is it still there or did they finally bury it somewhere?  That’s kind of something I need closure on.

That voiceover from Claire daring history to “try and stop me…”, well tempting fate doesn’t seem to go right but then again Claire and Jamie have survived a lot of odds.  However, if they were cats what life would they each be on right now? 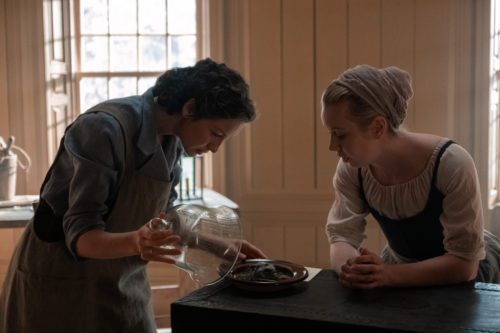 Caitriona Balfe as Claire Fraser and Lauren Lyle as Marsali

He’s in the Militia now

Jamie returns home, but it’s not a happy homecoming.  He’s only there to gather the men who swore fealty to him and then head back to Knox in Hillsborough.  Jamie is concerned that he’s now putting a militia together to hunt down Murtagh and the Regulators, who also seem to have a decent sized force, but Claire tries to belay that concern by saying that historical texts don’t have anything in them about a battle at this time in that area.  Oh, but Claire…everyone knows that the victors write history. 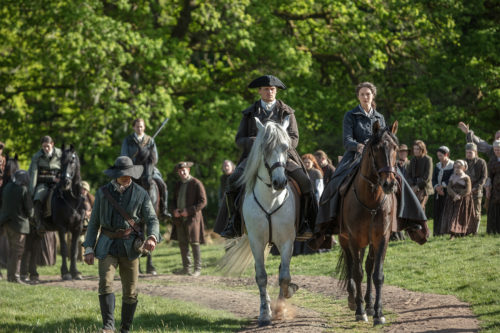 Of course, Jamie only has a handful of men at the ridge so he sends Fergus off to ask a local printer to create some flyers to start passing around to get more men.  So Fergus grabs the first scrap of paper he finds and takes notes before riding off.  The scrap of paper looks suspiciously like the paper Claire and Bree were using to write “Doctor Rawlings’” medical advice. I’m pretty certain that’s going to come back to bite them all in the you know what.

Another concerning thing is that Captain MacKenzie (aka Roger) is going with Jamie and the crew.  Hopefully, Bree has continued to give him shooting lessons.  Halfway along the journey Claire and Jamie have to make a detour (more on that later) leaving Roger in charge of getting more men to join their merry band.  And the first thing he does is promise some woman that her two sons will make it back alive.  And her look says it all.  Roger tries to backtrack with a well placed ‘within my power’ caveat, but the damage has been done.  Oh Roger, you sweet summer child.

No peace for the wicked –

Claire is traveling with the band of merry militiamen, having finagled a ride along by giving the whole ‘I’m a healer and if there’s a battle you’ll need me’ speech.  Which Jamie falls for, of course.  I’m no psychologist, but I’m starting to think she has a deep-rooted need to be in the thick of battles – but someone wiser than me can wax on about that.

Josiah – he of the abscessed tonsils – is along as well and soon we meet his twin brother, Keziah, whom he’s helped to free from a local man, Mr. Beardsley.  They’re indentured to this man who has rendered Keziah deaf through repeated abuse.  Jamie promises to buy their bond and sets off with Claire to do that.

Instead of servitude bonds, they find a house of horrors.  An abused wife is torturing her husband who has suffered a stroke, leaving him paralyzed and at her mercy.  He’s also rotting alive. Claire, predictably, goes into Hippocratic Oath mode and sets about trying to save him.  Jamie feels they should just put him out of his misery.  During this charming visit, Mrs. Beardsley goes into labor, and low and behold the child is most assuredly not Mr. Beardsley’s – she’s mixed race.

As the woman tells her story of woe Claire learns her name is Francis aka Fanny which means ‘free’.  And that’s what the woman wants for herself.  Freedom.  So she sneaks away while everyone is asleep, leaving the child, leaving the bonds for Josiah and his brother, leaving her husband – setting herself free.

Jamie sends Claire out with the baby and confronts Mr. Beardsley with his choices.  Let them take him to the nearest town where his wounds may heal but he’ll probably be paralyzed for the rest of his life, or let Jamie end the suffering.  Through some dramatic blinking, Mr. Beardsley chooses death and also chooses to not have any last prayers said for his soul.

Having dispatched Mr. Beardsley to his fate Jamie and Claire take the baby and leave while an ominous amount of birds cover the sky in darkness.  I’m sure we can find some thematic parallels between these birds and Mr. Beardsley’s transgressions being met in this world with some arguable justice and what he’ll probably face in the next, or about the upcoming struggles the Fraser’s will be facing, but I can only think of one word. Ominous.

This also brings us to the moment Jamie reminds Claire his father died after a stroke, and should the same happen to him, he doesn’t want Claire to try and keep him alive if he’s in that state.  Her reply is not necessarily a resounding  promise on that end:

Jamie finally confirms that Bonnet is alive and tells Claire who immediately goes all mama bear, but they both think Bree isn’t aware.  This inevitable clash is going to be brutal.

During their time in the house of horrors Claire has a moment where she is questioning the madness around her:

And Jamie gives her the most rational answer – the only one.   However, Claire quickly points out it’s not and tells Jamie that she’s determined to have Bree, Roger, and Jemmy return to the 20th century as soon as Jemmy is old enough.  Jamie is not too happy with this thought.  She has an ally in Roger, he has one in Bree.  It will be interesting to see how this plays out.

When all is said and done, and for all the talk for freedom in this episode, it felt more like a trap is closing in.  Or is that just me?

And let’s applaud how well Paul Gorman portrayed both brothers! Also, how well the show edited these scenes together.  I honestly thought it was twins until I looked up the cast and realized it was one actor.

What’s on deck for next week: “The Company We Keep”

Roger leads Jamie’s militia to the rural trading post of Brownsville and finds himself embroiled in a bitter feud.  Jamie and Claire arrive to find that Roger’s rather unusual strategy may have cost them the loyalty of the militia.  Claire learns that her ‘modern’ medical advice has spread further than she intended.