Yep, this is one of the sections of “The Fiery Cross” I’ve been dreading seeing onscreen, and next week will continue it on.  Just FYI, if you haven’t read the books or watched the episode yet – THERE BE SPOILERS AHEAD!

Sing Me a Song

Ok, let’s just get this out of the way.  The opening words of the theme to this show and the title of the episode are really brought home at the end of the episode as we see the body of Roger MacKenzie hanging from a tree as a traitor.

So how many decisions led to this moment?  1) Roger and Bree coming down to Hillsborough so Roger can join the militia in their stance against the Regulators.  While he still carries the title “Captain” we all know he is still not a fighter and not a strategist, so probably not a wise decision.  2) Allowing Roger to be the one to go behind enemy lines in an attempt to warn Murtagh about the upcoming battle (more on the reasons for this later).  The reasoning is sound – Jamie can’t go and neither can the women, and Murtagh knows Roger, so he’ll listen to him.  However, how much is this sound reasoning and how much is this Roger’s attempt to prove himself to Jamie?  3) Roger stopping to speak with Morag.  You know he shouldn’t have stopped to speak to her, but you get why he does, however, he should not have lingered.  Everyone he speaks to at that moment delays him getting back and pushes him further and further into being on the wrong side of the battle. 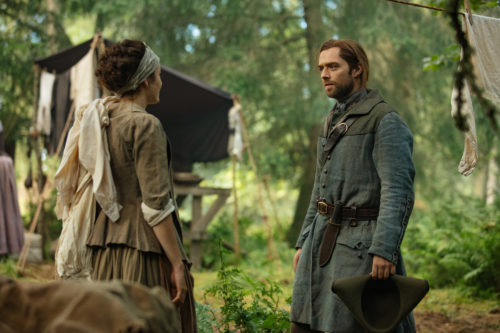 So, here we are.  Another moment of great suffering for Roger and Bree.  Another moment where you just want to tell these characters to stop making promises since it’s like they’re almost tempting fate (ie – Roger promising Jem to sing more for him when he returns).  Also, the irony is not lost when Bree comments that if they were in their time she would be wishing him a good day at the office vs. seeing him off to battle.  Kind of got under my skin a bit.

**SPOILER** – Yes, that is Roger, but notice the hand missing from the little noose and under the hood. That’s all I’ll say about that, but there you are.  As someone who has read the books I know the next part, but I’m trying not to spoil it too much for those who are watching the show before reading or just want to enjoy the show period.  We’re all fans in this together so trying to be respectful of that.

History Will Not Be Denied

So we saw at Culloden that history will not be stopped and here we are again at the Battle of Alamance (If you want a brief history of this battle you can read about it here –> /https://alamancebattleground.org/ or look it up on your own) faced with the same dilemma.

While everyone knows this skirmish is coming, it’s not until Bree hears the name of the nearby river that she realizes the truth about what is going to take place here.  History records the battle and how Tryon’s group defeats the Regulators.  So while the rest agree to try and talk Murtagh out of this fight, Bree is the only one who argues that they might be messing with history too much.  However, she’s outnumbered and Roger goes to warn Murtagh.

The attempt doesn’t really work and the battle takes place just as history records.  And as history records, it sows the seeds of discontent amongst those ‘loyal’ to the crown as is so wonderfully illustrated by Jamie’s tirade to Governor Tryon.

I will say that while it’s a great speech, the fact Jamie gets away with it is very dubious.  Most of what he says walks a fine line to treason and the fact he basically states his oath to the crown is over…I mean…this was a moment that just didn’t work for me.  If they’d had the conversation in private – maybe – but the fact that Jamie does it in front of other people, aka witnesses, doesn’t sit well with me.  Perhaps this will be shown to come back to haunt him, but the whole thing just didn’t fill me with a spirit of “YASSSSS JAMIE” as it should have.

However, Sam does a great job of portraying how uncomfortable and p*ssed off Jamie is wearing that Red Coat. The look on his face, the way he moves in the thing, you just feel the constant contempt rolling off of him.

It’s a battle so loss is inevitable.

Goodbye Isaiah Morton?  Unclear.  The Browns are there and still sore about what went down with Alicia, but they agree to let things go while fighting on a common side.  However, the fact that they are present when Isaiah is wounded and the fact he is shot in the back does lead to the conclusion that perhaps they weren’t being entirely honest.  No shock there.  While he’s shot in the lung, he is brought to Claire’s impromptu battle hospital tent, and she does start to tend to him but we don’t really see what happens.

Goodbye Murtagh Fitzgibbons?  Confirmed.  Finally, we see the death of Murtagh Fitzgibbons.  I’m still pondering how I feel about it.  As a plot device to make the battle of Alamance more personal and Jamie’s decision to part ways with The Crown more decisive, it works.  However, was it necessary?  Don’t get me wrong, I love Murtagh, but I’ve been struggling with his part in all this from the beginning.  It’s one of those moments where, as a book reader, you struggle with the changes made in the onscreen adaptation.  That aside, his death is a wonderful moment for all the actors to really ‘bring it’ emotionally.  I admit, I teared up a little, so that says how well they all played this out. 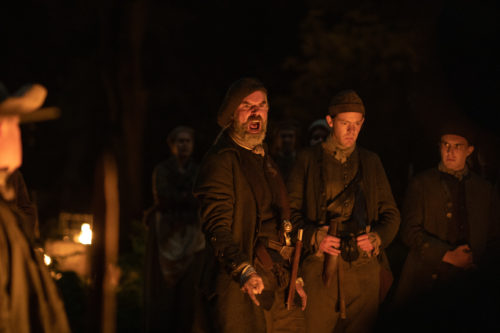 Honorable mention to end of Claire’s medical syringe which Lionel Brown destroys before she can administer penicillin to Isaiah Morton. However, you know Claire will not let that stand in her way and we can all be sure she’ll find a way to either make a new one or find another way to administer the drug.

Ghost of Season’s Past

While Stephen Bonnet has been haunting us all season so far, and unexpected surprise popped up in this episode and I admit a squealed a bit in delight. Granted he’s not playing his former character but it’s still loads of fun.  **SPOILER ALERT**

So, I mentioned briefly earlier how Roger runs into his ancestor Morag again at Alamance on the side of the Regulators and it doesn’t go well for him.  The reason it does not go well is because of her husband, William Buccleigh MacKenzie, who is the illegitimate son of Dougal MacKenzie and Geillis Duncan.  And who is played by none other than Graham McTavish!!!!  Which is kind of wonderful since it completely makes sense that Dougal’s son would look like him.  (Ok, ok, he looks nothing like he’s described in the book, but who cares…it’s Graham!).  Also, can Graham not get the chance to play someone who isn’t a complete and total *ssh*le?  Then again, Roger did hug his wife in a way that didn’t look entirely familial (in the book he kisses her).

Before I close this out, I just have to say if I look as good at 50 as Claire and Jamie do, then I will be tempted to fly to Scotland, find some standing stones and do a little dance in homage to them because it is ridiculous how well they are aging ;P 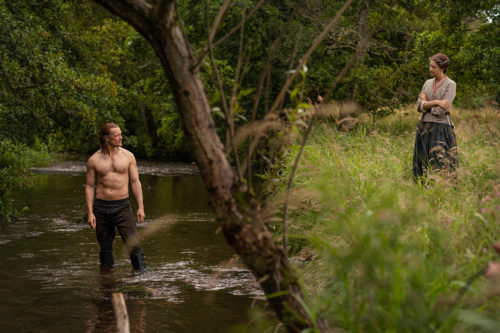 What’s on deck for next week: “Famous Last Words”

Ok, wasn’t able to find the synopsis for this one, but here’s the trailer: