I’m going to take a selfish moment and talk about something personal with this episode.  The name Alicia.  That’s my name, and the reason I mention it is because my parents gave me that name since I was born in 1976, during the country’s bicentennial (and yes I just aged myself, but whatever) and they wanted to give me a name used during that era.  So, for all the years I’ve spent being called Alice, being lectured about the origin of my name, and a host of other things, it’s a bit satisfying to see it used in the historical context for which it was chosen.  Even if the character in question is a bit of a silly goose.

Thanks Claire, I’m pretty proud of it.  However, there’s really nothing more to say there so let’s get right to a slight recap and my thoughts about the episode. 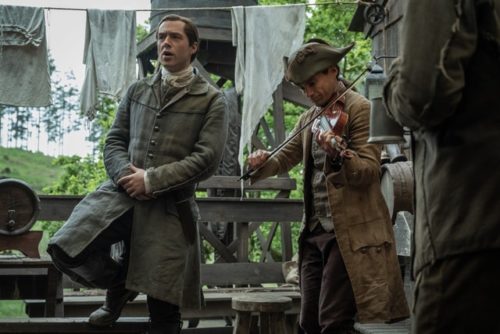 Poor Roger. He’s not a trained fighter, never went through any battles, he’s a thinker.  So when a bunch of men are barricaded inside a building and using him and the militiamen as target practice because of one man’s indiscretion, can’t really blame him for handing over said man and some whiskey to try and keep the peace.  However, Jamie (when he arrives at Brownsville) points out that Roger had a militia under his command, so he could have just told them to surround the building and they probably could have quelled the whole thing.

Both sides have their merits, but both have their negatives.  Roger’s course of action we saw the negative effects of.  Men left the militia because he lost their respect.  They gave up a good deal of their whiskey to the people of the town, which they might need later on.  And Morton is being held prisoner and will probably be killed by his sweetheart’s father because he sullied her reputation and cost the family a very advantageous match with a local landowner.  But there was no bloodshed.  Jamie’s course probably would have quelled the fight and saved the whiskey, but there might have been some injuries on both sides, the bad blood would have spread to the entire militia and the uneasy truce wouldn’t have happened.

Either way, the damage is done and Jamie realizes that Roger isn’t really cut out for this.  Especially when Roger starts to unconsciously lecture Jamie on the origins of terms and tactics, proving he takes a more intellectual approach to issues and is not necessarily a man of action.  So when Jamie orders Roger to escort Claire back to Fraser’s Ridge (apparently both Beardsley twins have the same tonsil issue and need surgery) Roger realizes that he’ll never gain Jamie’s respect as a man.  Claire tries to cheer him up by pointing out that Jamie is entrusting Roger with his most trusted possession (aka her), but it feels like a pat on the head.

There’s no question of how Brownsville got its name since it seems that everyone there is named Brown.  Not even going to linger on that point, except to say they are a cagey lot.  Can’t make up my mind if the constant “on edge” feeling I had during this episode was my imagination or because this town is not quite right.  They seem too eager to take on the Beardsley baby (see the section below), too eager to point out they can be reasonable people despite trying to start a shoot-out when the militia first rolled into town, etc.

Also, without knowing where they stand on the issue of loyalty Jamie breaks out a “treason to the Crown” ultimatum if they start a fight with him and his men and they seem to capitulate too easily to that as well.  While I understand the man acting as town leader doesn’t want trouble with Governor Tryon and isn’t thrilled with the reputation the Regulators are giving folks in the hills, it just seems a bit too sudden that he agrees to have the men join Jamie’s militia.

There is something not adding up here.

Babies and love make us all a bit mushy minded 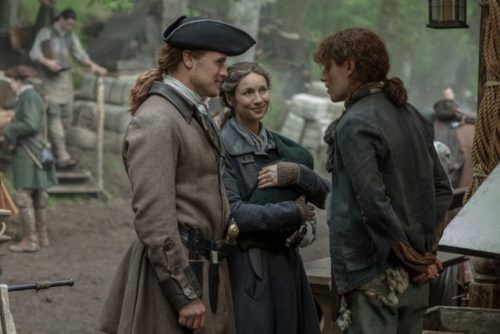 While Jamie is dealing with the Morton vs. Brownsville and militia issues, Claire finds the women in town surprisingly accepting of the little mixed-race babe she’s carrying with her.  Turns out one of the women in town had a baby born too soon and it died so it’s no surprise that she quickly takes to “Bonnie”, especially after nursing her.  However, they keep saying ‘it’s not the child’s fault’ a bit too often for my liking.  While that is very true, it’s a bit forward-thinking for that time. Especially when they all would probably stone Alicia Brown and Isaiah Morton in the middle of town for their affair if they knew he was married and Alicia was pregnant.  Just adds to the “what’s up with this town” vibe.

Claire is more than happy to let the grieving mom and her husband have the child, but Jamie has been thinking that he and Claire could raise the child themselves.  He’s been enjoying the sight of Claire holding a wee bairn in her arms since he never got to see her raise Bree, and is starting to get a nesting urge.  Claire carefully states that their lives are near perfect for the moment, and brings up the obituary Bree showed them when she first showed up in their time (yeah, remember that?).  She thinks the baby would be better with the local family.  Jamie begrudgingly admits that giving the property that comes with the baby to the Browns will probably help to smooth the ruffled feathers as well.

Meanwhile, Morton’s lady love – Alicia – is pretty convinced she’s pregnant and has learned that not only does her family want Morton dead but that he’s already married.  A fact Morton shares with Jamie when Jamie tells him he has to marry the girl.  Of course, Jamie tells Claire, and Claire tells Alicia so the girl will stop pining over Morton, but that just drives the girl to deeper despair and she tries to kill herself.  And fails miserably before Jamie and Claire find her and stop her.

They bring her back to their room the good townspeople have given them for the night and Morton shows up because he can’t stay away from his love.  It’s as ridiculous as Romeo and Juliet’s obsession with each other, but without the overly dramatic suicides (although as stated earlier the lady does try).   I won’t even go into Morton’s whole speech to Jamie and Roger about how they love their women.  It’s just too painful.

Ghosts are all around us

Meanwhile back at Fraser’s Ridge, Bree, Marsali, and company are holding down the fort (so to speak).  Bree returns from a shopping trip to their local town and discovers a coin in Jemmy’s basket.  She’s told a friendly Irish man left it with him after asking if the boy took after his father or mother.  EEEEEYIKES!  Bree tries to brush it off.  However, later she hears an animal call in the woods that sets her on edge and then she loses sight of Jem and goes into full-on panic mode until Marsali finds he’s crawled outside (a closed door I might point out) to find his ball. 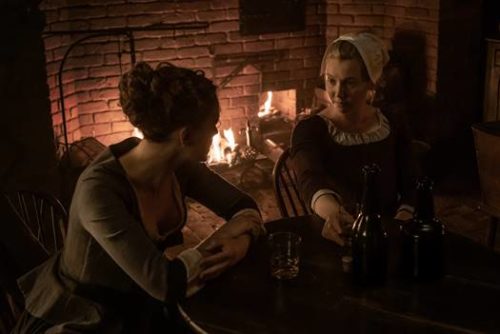 Sophie Skelton as Brianna MacKenzie and Lauren Lyle and Marsali

Marsali tries to get Bree to tell her what’s wrong, and Bree won’t admit the truth – she’s afraid that Bonnet has found them (AAARRRGGGHHHH!!!!), so instead Marsali gets them drinking and talks Bree down off the ledge.  Sort of.  Later, Bree finds the pictures she’s drawn of Bonnet and burns them, but some ghosts can’t be exorcised so easily.

Seriously, just tell people you know and they can help you!  This family is so dang stubborn!

The family you choose

I find it very interesting that nearly everyone in this show has not been raised by the family they were born into, but the family that took them in.  Claire was raised by an uncle, Roger by the Reverend, Bree was raised by her biological mother but not her biological father, Murtagh essentially took over being a type of guardian to Jamie when his parents died, Roger adopts Jem as his own despite knowing he might not be, Jamie adopts Fergus, Lord John Grey adopts Jamie’s son, Jamie had become a type of father to Marsali and her sister, and the list goes on.  I never really thought about it before, but this show (and the books) is filled with families that are made out of choice and not by birth.  Sometimes those bonds can be even stronger, which might be why everyone is so fiercely loyal to each other.

Well, that’s it for this week.  What did you think of this episode?  Anything stand out that isn’t mentioned here?

What’s on deck for next week: “PERPETUAL ADORATION”

Jamie and his militia arrive at Hillsborough to learn that Governor Tryon has proposed a rather unorthodox solution to deal with the threat posed by the Regulators and to resolve the growing political crisis.  Jamie is forced to take drastic action when his relationship to Murtagh is at risk of coming to light.  Busy with present-day life at the Ridge, Roger and Brianna must nevertheless come to terms with their past when Roger learns new information about Stephen Bonnet.  Claire recalls an episode from her past that led her back to Jamie. 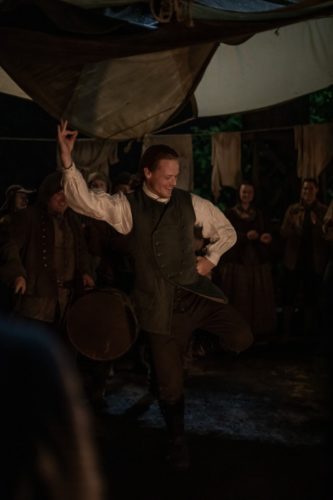