And let me tell you… If you haven’t seen it… It’s awesome! I can’t wait to get it on blu-ray.

Directed by Guillermo del Toro, Pacific Rim is an epic science fiction film set in the 2020s. Earth is at war with Kaijus; colossal monsters from an inter-dimensional gateway on the Pacific Ocean floor. Humanity unites to fight these huge monsters by creating the Jaegers: gigantic humanoid robots that are controlled by two pilots whose minds and memories are linked. 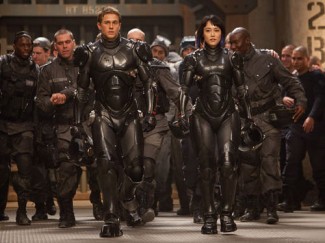 The story takes place in the later days of the war, following Raleigh Becket, a former Jaeger pilot called out of retirement and paired up with newbie pilot Mako Mori in a final effort to defeat the Kaijus!

And now you can win a copy of the film on blu-ray! Say Wha? That’s all kinds of awesome!

Plus, check out this new blog app which has some cool stuff like:

Pacific Rim: CONTROLLABLE GIFs – Move & click your mouse across the GIFs to control the Giant Kaiju and Massive Jaegers!

Pacific Rim SUPERFAN QUIZ – How do your movie smarts stack up? Do you consider yourself to be a movie superfan? Take the quiz to find out!

Pacific Rim SOUNDBOARD – Pacific Rim features epic battles between the Jaegers and Kaiju! Play with SFX from the movie, create your own battle clashes, and save mankind from the apocalypse!

Fill out the rafflecopter form below to enter!!