Being quarantined at home has created a big void of time passing with no autograph collecting, but it has gotten me to start pulling some things off the shelves for the first time in years. While sorting through some old Tiger Beat magazines, I came across my stash of Paley Fest programs. Back in the early years of the Fest, I didn’t think about bringing any specific items to have signed because they gave away these lovely programs featuring the whole years line up and I would, when the opportunity arose, have the subject of that night’s panel sign the program. Not great for display, but I have a treasure trove of memories bound in these programs going back to the early ‘90s. Today, I randomly pulled off the shelf two programs from 1996 – the 13th offering from the fledgeling Museum of Television and Radio. It was held in October, as the now annual event was twice a year for a while. The autographed programs I unearthed were for “Third Rock From the Sun” (which had debuted in January of that year) and Ellen Degeneres’ sitcom “Ellen.”

What I remember most about “3rd Rock From The Sun,” is that the cast sat to my immediate right as the two new episodes aired, and John Lithgow laughed boisterously through the whole thing. Getting the program signed by the three principal adult cast members was no problem, but young Joseph Gorden-Levitt and Jane Curtin exited without noticing the dozen or so people who were asking for signatures. Yes, you read that right— in the earlier days of Paley Fest, almost everyone in the auditorium got up to leave when the panel ended. No pushing, no panic, no problem. 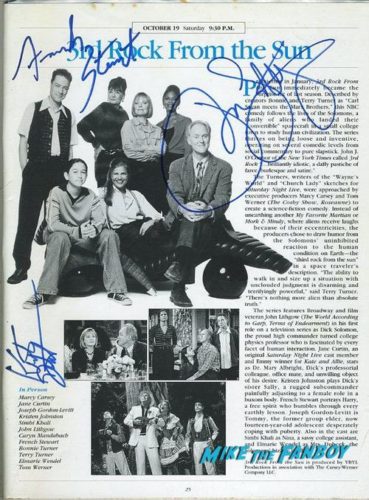 Ellen’s event was months before the famous “coming out” episode, but she told the audience there that it would be integrated into the show even though she hadn’t made her sexuality in real life common knowledge to the rest of the world yet, though it was no secret in Hollywood. Ellen also stayed and signed programs for every person who approached the stage after the event. Joey Fisher also signed my program. 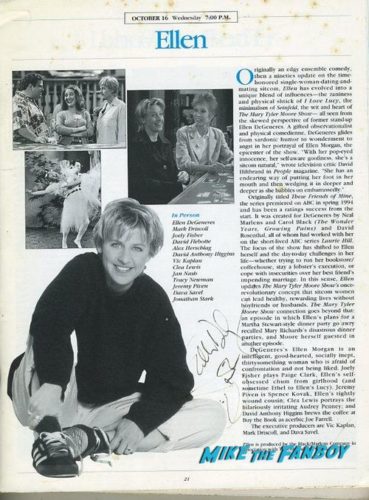 It was forever ago that things were so easy, but with the lack of events and opportunities for any collecting right now has me hoping for a return to even the bone-crushing competitiveness that is associated with the post-show Paley Fest. Social distancing and the Paley Fest are not a good mix, though I also dream return to the calm of the early days where graphing wasn’t quite so dangerous.