Home / Fanboying! • Stars of the 1980's and 1990's / Sir Paul McCartney Causes Beatlemania Before A Gig In London! Autographs! And More From The Rock Legend!

Dude, Lou got one of the most iconic musicians of all time! None other than Sir Paul McCartney!

That’s pretty damn epic, I do have to say. A huge congrats brother! He’s a Beatle after all. Man… There’s not much I can say to add to this experience.

Check out Lou’s full recap below!

So I’ve been wanting to meet Sir Paul for quite a while…years in fact, and news of an intimate gig by the former Beatle at the Maida Vale studios would be the right time to take a trip to the city from the West Country.

I get to the studio at about 5:20am and there is no one around. I was a little worried because when Macca is about it is a big event (for dealers especially). About 6am a couple other guys turn up then around 20 fans who had tickets to the show. A couple regular dealers make an appearance and inform us that they have been ‘racking’ Britney Spears who is over at the moments which would explain why it was so quiet. This is great news for me as I’ve been imagining a Macca on my nice Abbey Road vinyl or this beautiful 11×14 photo I have promoting his current come back album.

Barriers start to go up at the entrance at about 9am and we get wind he is going to show at about 10:40 as his show starts at 11am.

The barriers only cover the pavement so that’s about 6 bodies on the barrier and there were around 10-15 people behind us. The 6 of us all recognize each other from other events so we are all pretty calm. There is a barrier opposite us with about 10 people there so 30 people in total wanting a piece of Paul.

As with all premieres/ events that panic stage of what ifs and all the scenarios of if it doesn’t go to plan starts entering my head. We notice a girl near the drop off point has a RED WHITE BOARD PEN! Aaaahhhhh get that girl a sharpie or something permanent we shout. With that all sorted we wait patiently waiting for his car to arrive.

A silver car pulls up, 3 security jump out followed by a tall, tanned, well groomed Liverpudlian….holy crap it’s Paul McCartney. An old women walks up to him ignoring the barrier and asks him to sign her copy of his cd New and she hands him a biero! Noooo! Security rush up but back off when they realize its a little old dear. He signs happily and thank god gives her pen back. Macca walks to our side of the barrier and signs one item with a girls blue sharpie. He moves in front of me signs a still to the right of me whilst vinyls and photos are coming from left, right and centre. My image was the biggest and the only recent image I could see. I quickly forgot about my Abbey Road vinyl and focused on my still…and it worked. He signed 2 more then went in. I was so lucky! 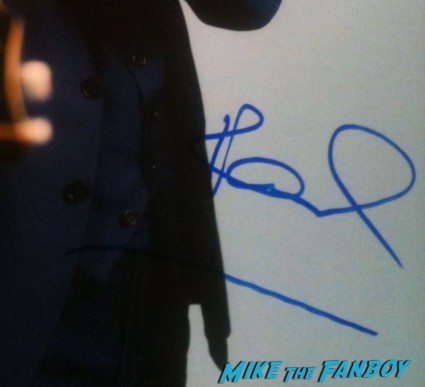 He signed just Paul with the squiggle at the end for everyone. My only disappointment is that there is a gap in my squiggle where the pen lost a bit of contact with the paper but hey, it’s a Paul McCartney! 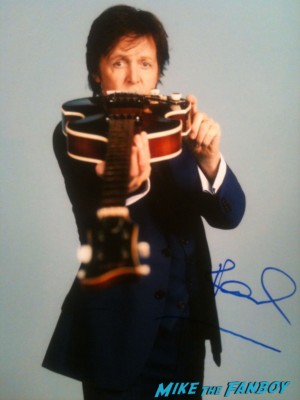