Luciano Pavarotti’s perfect pitch attracted a worldwide audience and became the best selling opera singer of all time. The King of the High C’s cemented himself with a remarkable, robust impact in history. Ron Howard’s “Pavarotti” tries to capture his energy and enthusiasm once again.

“Pavarotti” opens with the legendary tenor visiting an iconic venue in Brazil, which once housed a performance by his idol Enrico Caruso, after one of his memorable concerts. This minuscule moment magnificently captures Pavarotti’s larger than life personality as someone who perceived things just happen as planning ahead had no real significance. For nearly two hours, Howard helms an impressive documentary honoring the late, great opera singer.

Whether you simply knew him as one of “The Three Tenors” or merely by name, the film focuses on Pavarotti’s career with a well-constructed piece of cinema. Vintage interviews intertwined with home movies, televised opera, previous recordings and contemporary interviews showcase The Maestro with all his guts and glory. 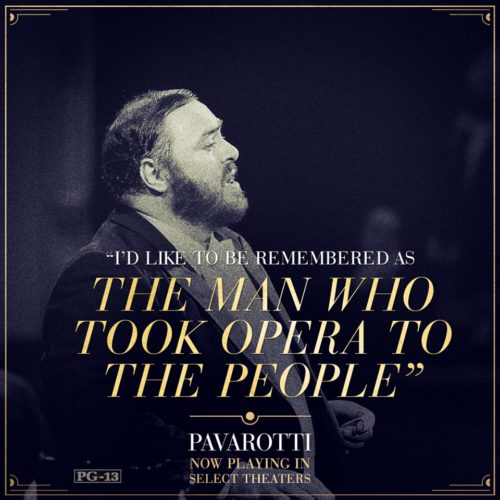 As someone who took opera to the people, Pavarotti cemented himself in history as a compassionate, charismatic and caring individual. Although Pavarotti credits his father as a superior tenor, it was his mother’s motivation that installed confidence and credibility into his burgeoning career and encouraged him to pursue his dream.

Howard has created another amazing film to his already impressive career with his latest documentary. Much like Pavarotti’s career, Howard create a joyous journey learning about this insecure Italian elementary school teacher, who became one of the most memorable and easily recognizable figures of the 20th Century. The technique of discovering and developing Pavarotti’s voice is beautifully illustrated throughout the film, but would resonate better if it was deeper developed rather than so straightforward. 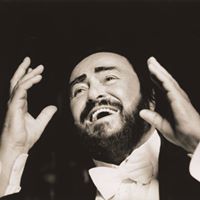 Pavarotti personified a larger than life personality and he lived that way both on & off the stage. This documentary is a sincere, sweet film focused on his career and allows audience members to gradually appreciate his immense impact on the world of music. Unlike most music snobs, Howard has assembled an easy-going film experience for fans to be bought into the world of opera. There is no preachy nature, but a beautiful exploration of Luciano Pavarotti. The barrage of classic clips certainly captures Pavarotti’s lifestyle and lust for worldly things. Despite dozens of home videos and intimate recordings, there remains a lackluster personal connection from the filmmakers creating a missed opportunity. 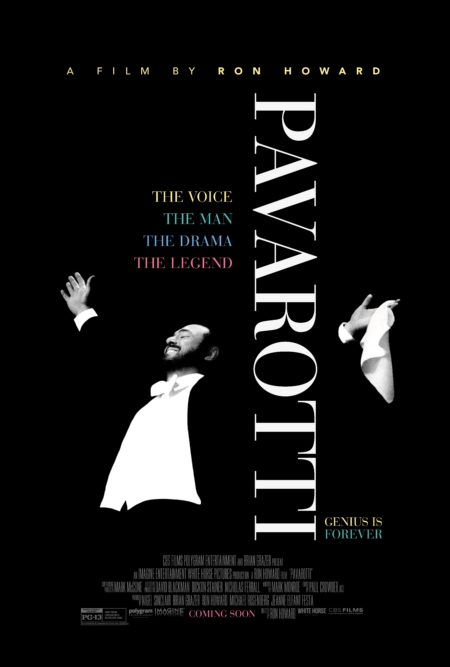 Viewers with an open mind will appreciate the film for what it is. However certain cinephiles might scrutinize the simplicity much like his critics chastised Pavarotti for brining opera to the rural areas of the world with concerts, recitals and entertainment spectacles like his Pavarotti & Friends series. As someone who grew up in a Mario Lanza household, who was once dubbed “The Voice Of The Century” and a superior singer compared to Enrico Caruso, my initial inclinations throughout adolescence and early adulthood was to dismiss The Three Tenors. Their talent was undeniable, but the gimmick couldn’t catch my attention except for the occasional “Seinfeld” reference.

For those interested in an entertaining, engaging music documentary than “Pavarotti” is perfect for you. It’s a super solid movie and worth watching regardless of your musical taste. After all music is the universal language.