Showtime’s Penny Dreadful is heating up, and season two is better than ever!

I can’t wait to see what else is in store for this season, I have to tell you, if you haven’t been catching up with Penny Dreadful I strongly suggest checking out Showtime, you won’t regret it!

Anushika has a wonderful recap of episode five!

The episode opens with Madame Kali cracking open the head of one of her creepy wax figures that strongly resembles Sir Malcom’s wife. To our surprise, she cracks it open to reveal an actual human brain. Yikes! This woman is not messing around. Her daughter, Hacate walks in with the valued ingredient for Ms. Vanessa Ives wax doll and insist on performing the ritual on her own. Mother and daughter go at it with both dolls. Quite the duo. Madame Kali finally stabs the brain sending Mrs. Murray screaming into a shock of pain. 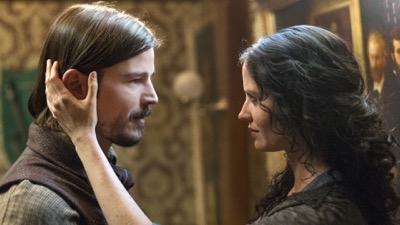 Back at the house, Ethan and the gang discusses their next move to protect the house and Ms. Ives. He shares a bit about his dark past. How they annihilated an entire tribe in fifteen minutes. They all come to an agreement to protect the house physically and spiritually with every ritual and weapon at their disposal. As they are aware of the voodoo doll, the gang turns the house into a fortress making it impossible to penetrate.

There’s nothing more chilling than one of Ms.Ives prayer sessions. I can’t shake away the eerie feeling that builds around her every single time. During yet another one, she can’t help but to feel watched. She is immediately confronted by one of the witches. Not knowing if it’s real or just her imagination, she runs over to Ethan’s room and ends up spending the night with Ethan at the foot of the bed. She definitely feels trapped, but Ethan’s company put her at ease. Ms. Ives claims, “Whatever you have done, whoever you have made yourself of, I’m here to accept you” Both have troubled souls. Even though it may seem like Vanessa is the one seeking help, they both need each other. 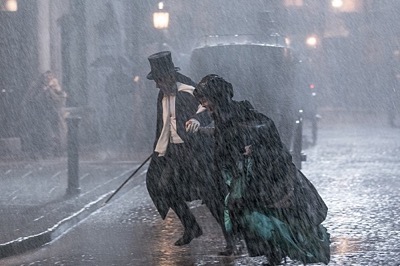 John Clare grows impatient with Victor Frankenstein and lunges at him with rage demanding to interact with Lilly. After some argument, he gets the chance to talk to Lilly and build their so called lost love story in an attempt to “restore” her memory. Unfortunately, Lily shows no interest in John and act quite awkward around him. She could care less about his stories. What seemed like a painful first date comes to a haul as soon as she reveals her intension to be just friends and nothing else. Outch! John can’t catch a break. The very human being brought to life for love and companionship, rejected him. Doubt any amount of poetry could get him through this. 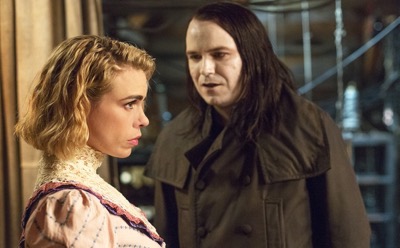 Meanwhile, Madame Kali continues to attack Mrs. Murray’s brain driving her absolutely mad. She is definitely trying to get her out of the picture.

Ethan gets an unexpected visit from Inspector Bartholomew while stocking up on bullets for their impending battle. He requests Ethan to accompany him to his station for a little chat. The inspector questions Ethan about his past and inquires about his present ventures in the city. His attempt to get any information fails when Ethan’s “coy” responses leave him empty handed. 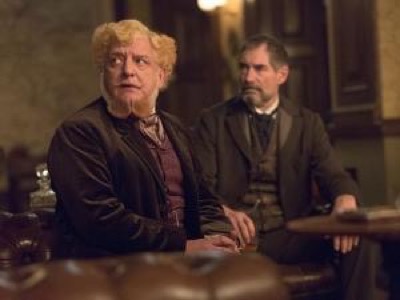 Victor Frankenstein and Lilly meet up with Vanessa Ives for coffee. Looking towards Victor after every sentence for his approval, Lilly survives her first social outing. Vanessa sees what Victor tries to resist.
Ethan continues to get followed and hunted and yet again he manages to dodge himself away from trouble. For being such a predatory creature, he is being hunted one too many times.

John and Vanessa Ives find common ground with their love of poetry. They share a moment that definitely takes their friendship to the next level. They talk of peace, something they both seek desperately. Vanessa shares the story of budding love between Victor and Lilly. Little that she knows, Lilly is John’s promised companion. Vanessa has no idea about her involvement in the love triangle. John’s confusion with women and social awkwardness gains Vanessa’s sympathy. Both crippled by love, she ends up teaching him how to dance. I’m surprised he didn’t pounce at her assuming she is in love with him. I guess he finally found true friendship. 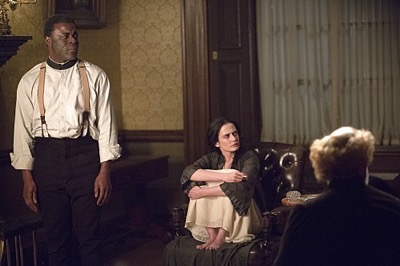 Meanwhile, Dorian Gray goes out in the town with Angelique. She is definitely helping him to keep his mind off Vanessa Ives. Their night takes an ugly turn when confronted by one of her former clients. As they take their leave, we spot Sir Malcolm getting cozy with Madame Kali not too far away. He is completely charmed by her and blinded to her true identity. 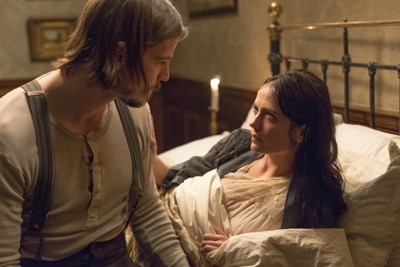 Back at the house, Ferdinand flirts with Ethan as usual blushing at his every word. They find something new with the cryptic puzzle. Discovering repeated verses, Ferdinand assumes it’s a poem waiting to be found.
At the Grey mansion, Angelique enters wearing Dorian’s clothes. More of her troubled past is uncovered, but it made no difference for Dorian as he has accepted her completely. They both identify themselves of being outside of the norm. 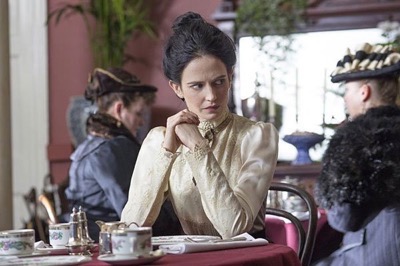 While everyone is enjoying each other, Mrs. Murray reaches her breaking point. She starts seeing her deceased children rise from the grave. Not being able to handle what she is seeing, she takes her own life. I guess she is out of the equation. Now there’s nothing standing between Sir Malcolm and Madame Kali. 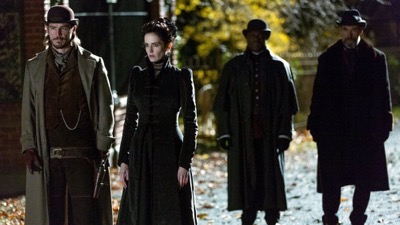 The last ten minutes of the episode consisted of intense bedroom escapades between Dorian Gray and Angelique, Sir Malcolm and Madame Kali and at last but not least between Victor Frankenstein and Lilly. Of course, we have yet to see Vanessa and Ethan go at each other. It’s getting closer, but they leave us wondering yet again.

So much going on, and I can’t wait to see what’ll happen next. I’m sure everyone got their own predictions. Until next time, keep shuffling those decks!