Showtime’s Penny Dreadful is burning up the airwaves. It’s one of the most unique and interesting shows on the air right now.

Season two started with the episode Fresh Hell and it was awesome. I have to tell you, Eva Green is amazing in this show. It’s worth watching just for her performance alone.

If you haven’t checked out Penny Dreadful yet, it’s time. You need to do so now!

Check out Anushika’s recap of episode one below!

The episode begins with Ms. Vanessa Ives taking a stroll in the snow. There aren’t any dull days in her life. What may seem like a harmless day comes to end when Madame Kali creeps up from the bushes muttering a Devilish chant that throws Vanessa down on her knees. Season 1 ended with a victory over an epic battle, but the war is still very much alive. 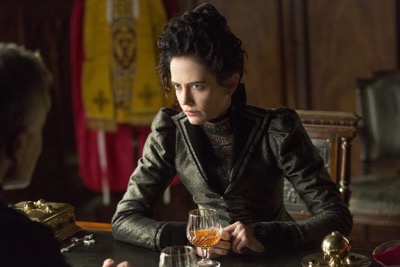 On the other side of town, Ethan Chandler wakes up covered in blood surrounded by mutilated bodies. Yikes! Someone had a rough night. Last season we all witness what he is capable of once his anger literally unleashes the beast inside him. He visits Ms. Ives to bid his farewell before leaving London. Shocked at his sudden decision, she expresses her concerns as he is an invaluable foot-soldier and friend. Ethan reveals the nature of his blackouts. Blinded to his own inner beast, Ethan attempts to flee from his loved ones to ensure their safety. Even though Vanessa offers her help, it might take a whole lot more to convince him to remain in London.

Their carriage ride comes to a turbulent halt after what sounded like a fatal struggle outside. The dead silence that followed was definitely unsettling. The stillness is broken by pale white creatures crashing through the windows. After a ridiculous flight to war them off, the carriage gets flipped on to its side. They were like crazy fan girls attacking a tour bus. When you think they are done, they just keep popping up. Vanessa snapping back at them with their own language finally put an end to the madness. Ethan was more than surprised to hear Vanessa spit out those words. The three pale creatures that looked like anorexic orcs from middle earth transformed themselves into women and disappeared into the night. I guess it’s on yet again. 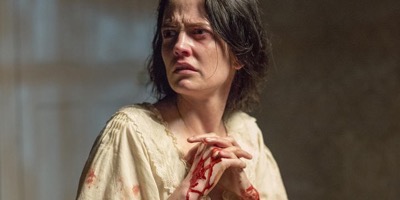 Meanwhile Dr. Frankenstein is up to his old tricks. Since he finally “found” a body end of last season, now he gets to make a mate for his Creature. They lower Brona Croft’s lifeless body into a filled bath and await a storm to produce the needed electricity. Victor Frankenstein is forced to perform this against his will to regain his freedom back. Creature takes his leave to find work, but makes sure to keep his presence by these parting words, “We are bound on a wheel of pain. I ask you, what is Dr. Frankenstein without his creature?” Yeah, good luck keeping him away. For someone who considers themselves as a monster, Creature is quite dramatic. 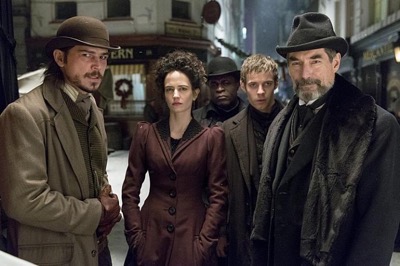 Quite shaken up by the events, Vanessa sits shivering in terror by the fire. Ethan decides to stay back even though she refused his help in the matter. I guess he won’t be leaving London any time soon. Vanessa questions Sembene about the past returning. He claims, “It never leaves us. It is who we are.” It definitely tells us that those women are dreaded nightmares from her past.

After burying Mina’s body, Sir Malcolm attempts to reconcile with his wife. He is denied when she claims, “Everything that was left between us is buried here”. Their children were the last strings holding them together as a family. Sir Malcolm expresses his heartbreak about the unfortunate recent events. No mercy from the wife; “We have no more children for you to save or to kill” Snap! She is undeniably an angry grieving mother.

While job hunting, Creature comes across Putney’s Family Waxworks. Safe to assume he feels at home among the lifeless wax figures. Mr. Putney is more than happy to welcome him aboard. He showcases his works in progress from the past and the present. Some work as recent as the massacre in Mariner’s Inn.

We are instantly taken back to the crime scene in Mariner’s Inn. Detectives are carrying out their investigation. Some questions if Jack the Ripper is at fault for this carnage. They are sure to track down Ethan as he is only survivor of the bloody madness.

Meanwhile, Ethan is concerned about Vanessa who has isolated herself in her room. He claims she “Held her ground against Satan himself, but now…I’ve never seen her frightened.”

In his little twisted den, Dr. Frankenstein is going through his own dilemma. This man seriously needs a companion or at least get laid. He talks to the Brona Crofts’s corpse. One thing leads to another and Victor gets to second base with Croft’s body. Before things go even further, he is interrupted by loud knocks on his door. He is summoned to attend to Ms. Ives. 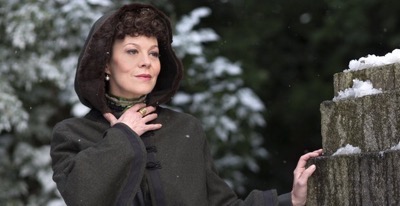 The Creature calls himself John Claire as he gets accepted into the family business. He is employed! The Putney’s blind daughter meets him. I thought he was just going to explode or faint when she was feeling his face. This man needs to calm down. Mrs. Putney is less than pleased with his face, but Mr.Putney snaps at her, “Quiet woman! That face will make our fortune.”

Sir Malcom comes home and Vanessa is beyond thrilled about his return. Everyone gathers in the living room to discuss the horrendous incident. Ms. Ives recognizes them with the devil’s mark, the ones under service of the demon. Vanessa spoke the word of the Devil, a dead language. Sir Malcom suggests learning more about the dead language since that played a huge part in her defense. Vanessa finally reveals that they are Night Comers, Witches. Frustrated by everything around her, she barks at everyone to stay away and that the battle is hers and hers alone.

Speaking of witches, we are taken to a grim old castle with a chilling song echoing through its walls. We are led through stairs, tunnels and hallways all the way up to a bath filled with blood. Madame Kali baths in blood while her victim still lies beside her. Shivers down my spine. After her bath, she enters the great living room to rejoin with the rest. She expresses her disappointment with the failed events that evening. They aren’t happy with Ethan, who is seen as her protector. One of the witches begs for a second chance, but things don’t go too well for her. They are alarmed by Vanessa’s ability to speak the dead language. Madame Kali is determined to deliver Ms. Ives to their master. The hunt is on! 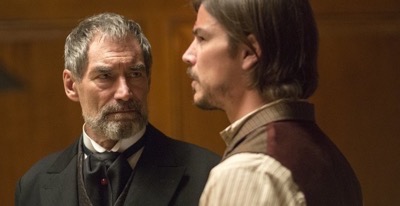 As storms are approaching, Victor Frankenstein rushes home to get things prepared to create yet another life. They run about to hoist the conductor to harness the energy from the storm. Their efforts seem wasted when things start blowing up in sparks. After pure chaos, the silence was quite discouraging. Things take a turn when you see hands slowly grasping the rim of the tub. Before we know it, Brona Croft is standing in front of Victor and Creature. Victor might want her for himself now. Things will get ugly.

The episode concludes with Ms. Vanessa Ives and Madame Kali having an intense prayer battle. For a battle with no contact, thing sure did get pretty bloody. I guess we’ll have to wait and see what happens next. Unlike last season, they aren’t the hunters anymore, but definitely the hunted.

Until next week, keep shuffling those decks!