Home / NEWS / They’re Back! Poltergeist Is Getting The Sequel/Reboot Treatment! Spoilers Ahead!

Apparently, there’s another reboot or remake in the works of a 1980’s classic.

Bloody Disggusting had some awesome spoilers from the new Poltergeist reboot/sequel. Now, I said spoilers so be warned…

In exclusive first details, the new version follows Eric Bowen and his family who, after he loses his job, relocate to a new town to start anew. His daughter, Madison, is abducted, making him truly understand what’s important in life: family. In the new version, Eric’s wife, Amy, can communicate with the dead.
Another interesting new character is Carrigan Burke, a television personality who hosts ‘Haunted House Cleaners.’ The supernatural doesn’t scare this guy. Dr. Brooke Powell is Carrigan’s ex-wife who is a parapsychologist at a local university. Her team investigates the supernatural events surrounding the disappearance of the Bowen girl.

“In one scene in the new film, the kids’ find some things behind the sliding panel in the attic…There’s the ‘Star Wars’ bed sheets (from Robbie’s room), a black-and-white TV set (why, of course!), and some Christmas decorations.”
The evil tree, the “freaky” clown and the “Lost people” will also make an appearance in this upcoming film.

Apparently Sam Raimi is going to produce this remake.
I’m not sure I’m down… I just don’t know about this one… 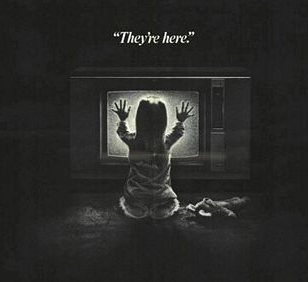