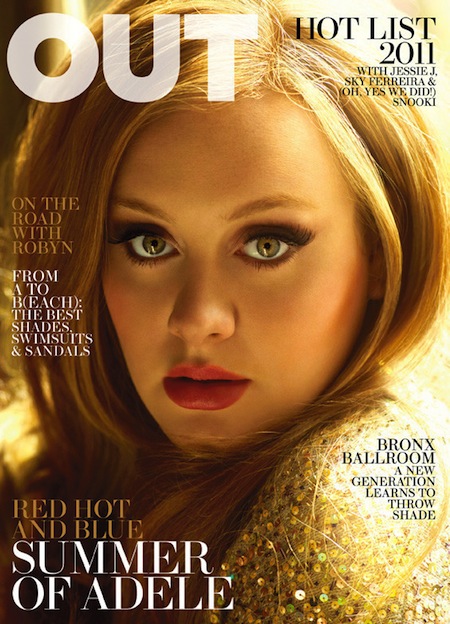 I can’t even begin to tell you how much I love Adele… Her new album “21” has been in my CD player non-stop for months now. I also loved “19” and saw Adele live at the Hollywood Bowl last year.

Anyway, now the lovely European import is on the cover of Out Magazine for June 2011 and she looks stunning. I loved her Rolling Stone cover but this photo shoot really is amazing and everything I think Adele is about.

In the article Adele talks about the two years in-between her albums “19” and “21” by saying, “The difference between the first and second album is that I was more philosophical about it all the second time, and I’m hoping that if I’m happy I can embrace it enough to write a record about it.”

although it seems that Adele finds this an unlikely scenario by continuing to comment “It would be fucking awful if my third album was about being happily settled down, and maybe on my way to being a mom, and all the critics were, like, ‘Yeah, it’s fucking shit. Can you be miserable, please?’ And all the fans were going, ‘I just don’t like you anymore. I don’t bond with you anymore.’ ”

I love her! How many times have I said something like, “Oh this record will be good because so and so got divorced or lost a loved one… or something like that…” This begs the question do we want our pop stars miserable… hmmmmm

That’s a little too much of a sociological journey for me to take right this second, so instead take a look at the rest of Adele’s amazing Out Magazine photo shoot below!