Home / Fanboying! • Pretty In Pinky / Pretty In Pinky Checks Out The Hollywood Collector’s Show And Comes Back With Pictures Of Maxwell Caulfield! Erik Estrada! Jeff Conaway and More!

Oh, the Hollywood Collector’s Show… You know I’ve gone a couple times and once I actually paid for a photo while I was there… Oh, Emma Caulfield you plague me! PLAGUE ME! But, normally, it’s just not something I like to do. I dunno, it’s just odd to see people who you remember from film and TV sitting behind a table with a stack of photos waiting for someone to shell out twenty bucks to get them signed… There’s just a… stigma about it I guess… Anyway, the always lovable Ms. Pinky was out at the last Collector’s Show and wanted to express her thoughts on the whole thing good and bad…

Take a look after the jump, and share your own thoughts in the comments section!

OK, I’m going to share a little secret with you: I both loathe and love the Hollywood Show equally at the same time. For those unfamiliar with the Hollywood Show, it’s an event put on four times a year at the Burbank Marriott Convention Center. When I first went, I expected to find a big, giant stadium-type room; in reality, it’s smaller than the size of two basketball courts. 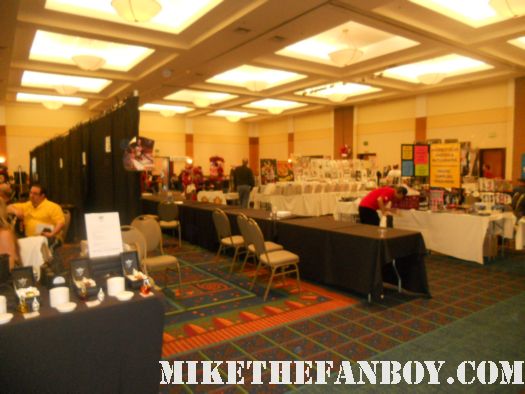 And in every square inch of the room, there’s a table. Rows and rows of tables. At each table is an old, washed up celebrity hoping you will pay ridiculous amounts of money for an autograph, picture, or both. 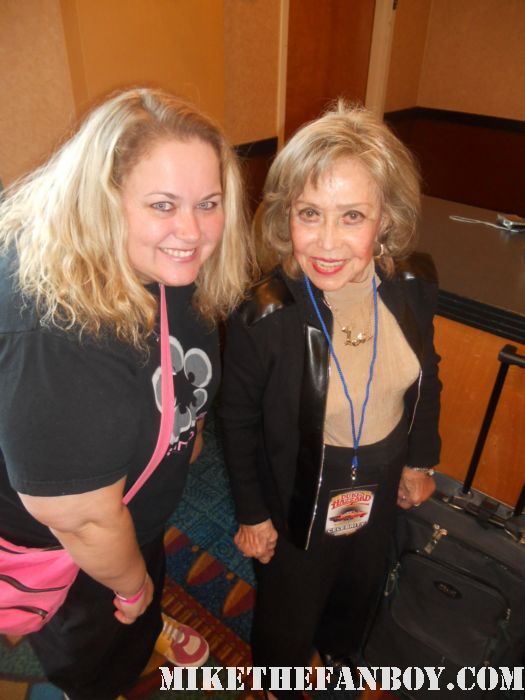 Well, that’s what I see. In truth, not everyone is old or washed up. But the fact that they’re at this type of event makes me sad. I don’t know why – on one hand, isn’t it great that such a thing exists? That fans can come from all over the world to meet their faves (many who’ve been out of the public eye for a very long time)? 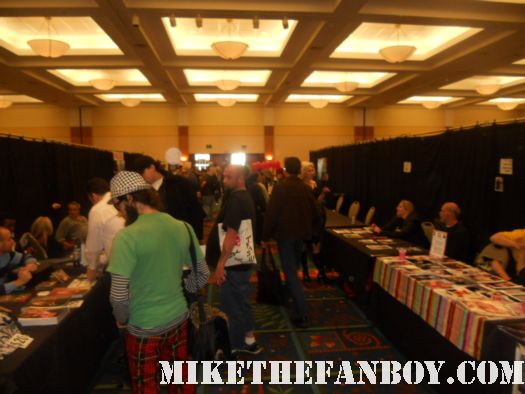 On the other hand, having to pay for a picture or an autograph, after having to pay $20 to get into the event, just feels icky to me. Especially when it’s a fairly current celebrity (like Billy Zane or Antonio Sabato, Jr., who were both recently there). 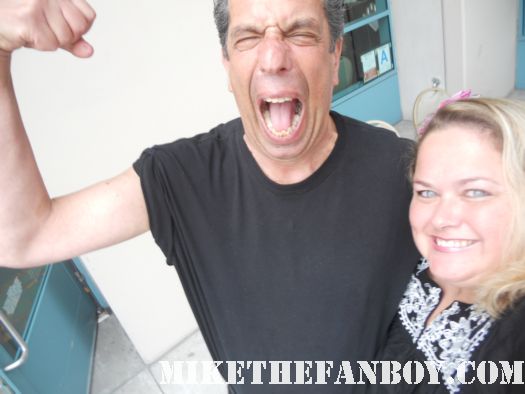 Don’t get me wrong – I’ve gone to the event three different times in the past year. And I’ll admit to paying for a few pictures here and there, but it was because I really liked the celebrity and wasn’t sure if I’d see them otherwise. In that regard, this event is fantastic. Once in awhile, I’ve even run into someone walking around the event on their own and gotten a picture for free (shhhh, don’t tell). 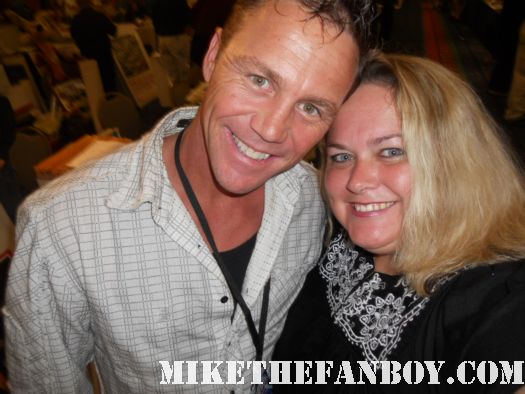 But, most of the time, I’m just super depressed walking around inside the room looking at all these celebrities hoping you’ll like them, love them, recognize them, pay them. Isn’t it enough that I drove two hours round-trip and paid the entrance fee? Why do I need to pay an additional $25 to take a picture WITH MY OWN CAMERA?!? Of course, maybe it’s just the lighting inside that does a number on my head – it’s this weird glowing orange color that makes everyone look terrible. All my pictures have this odd haze to them. 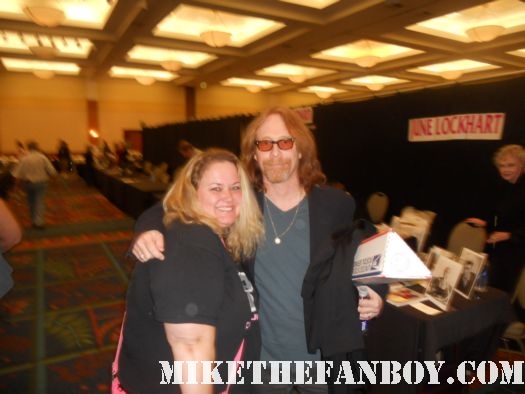 Still, I have had some pretty great experiences at this random event. Just before he passed away, I was able to spend a good deal of time talking with Jeff Conaway at his table. He was a sweetheart. 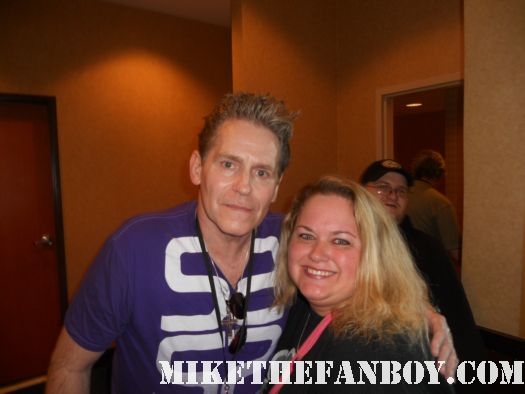 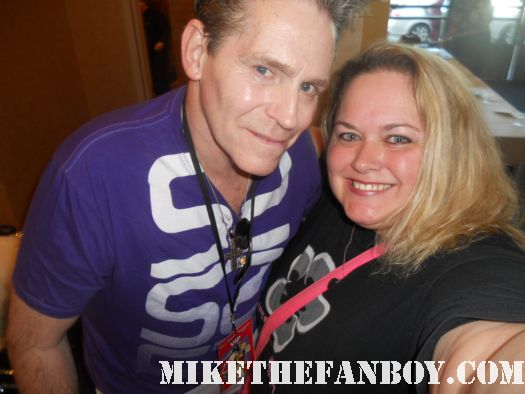 This past weekend, I met Juliet Mills and Maxwell Caulfield who loved my puppy, Sammy, and said they just wrote a TV pilot which featured a dog that looks just like him. They even took my card in case they need a dog someday for the show! How cool is that? 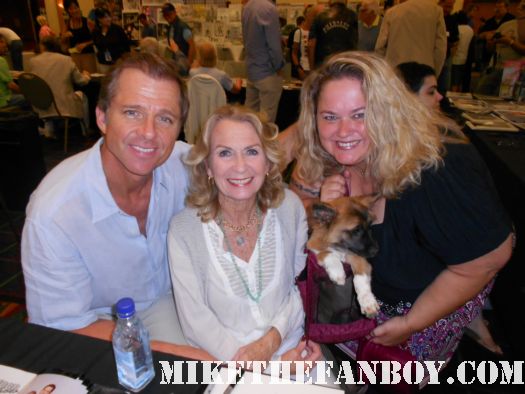 And, of course, meeting Erik Estrada, otherwise known as Ponch on CHiPs, rocked my world and made me the happiest girl alive. $15 for three different poses where he’s holding me in each one? That’s a deal! 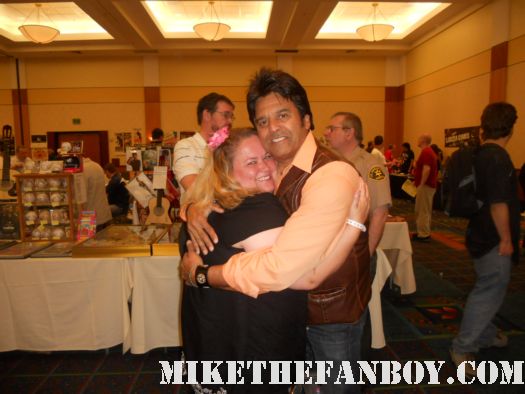 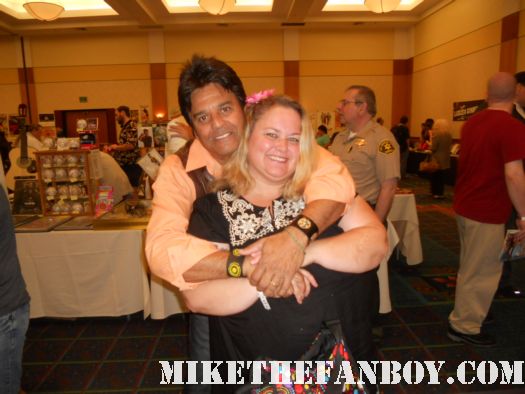 In addition to the celebrity tables, there are also some random booths – people selling autographs, memorabilia, clothing, and other random articles they think people might buy when lulled over by the orange hazy glow. 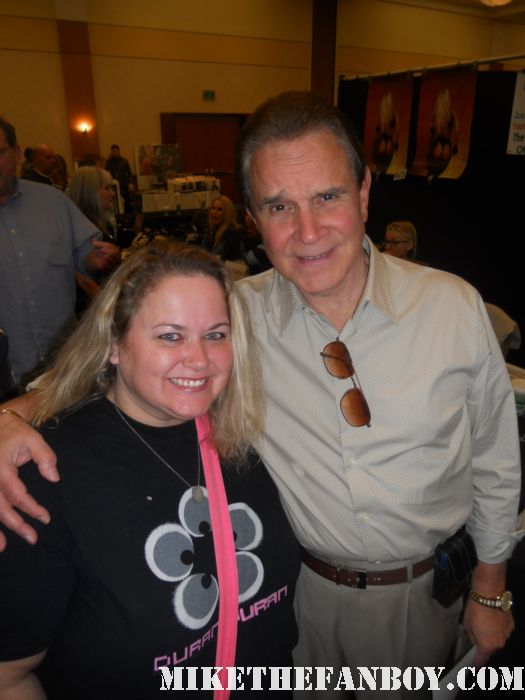 It’s an interesting place to see and if you have the chance, I suggest checking it out just for fun sometime. You don’t have to pay for the pics, just go to see the people and experience the hustle and bustle of all the collectors. Personally I’m hoping that Molly Ringwald ends up at one of the tables soon; then she’ll HAVE to be nice to me! For more information, or to find out a list of upcoming attendees, please visit their website: www.hollywoodshow.com.

As always, have a pink day!