You know, I have to tell you… I admire commitment. It’s true. I remember Erica saying to me once…”You kept saying you were going to get that Kylie Minogue picture disc signed in a pink paint pen and there it is on your wall!” That was probably a tad paraphrased and came out way gayer than I wanted but you get the idea.

Well, Ms. Pretty in Pinky has the same kind of commitment that I love and love to tease her about. There’s not many people who can rally once their hair spontaneously bursts into flames. That, at least to me would kind of kill the mood. But Pinky picks herself up and gets right back on the photo taking horse. This time it’s for Traffic star Benicio Del Toro.

You must check out her 10 year oddyssey after the jump! I did mention her HAIR CAUGHT ON FIRE right?

Hello, my lovelies. Pinky Lovejoy here to tell you a tale about finally getting a picture with my #3 – the one and only Benicio Del Toro. Now, I’m the first to admit I’m a lucky girl – out of my Top Ten (list of celeb crushes), I’ve had the opportunity to meet and get pictures with all of them. Well, all but Benicio. That is, until now. My ten year quest FINALLY culminated with a picture – well, five, actually – the other day. Success! 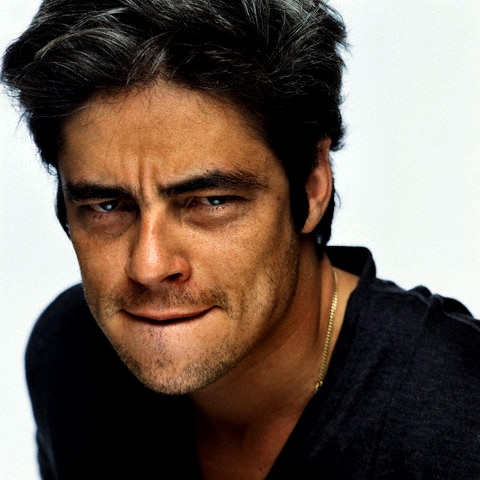 My story begins way back in 2002 when I was working at my very first Sundance and learned that Benicio would be honored by the Piper Heidsieck champagne company at a party during the first weekend of the Festival.

But, there were challenges: First, I was already told I might not be allowed in the VIP section because my desk was adorned with pictures of Benicio and, therefore, I’d been labeled a “left turn” (I still don’t really know what that means, but I don’t think it’s positive). Second, this was before I really got any pictures with celebrities and I had no idea what I was doing. Finally, they said no cameras were allowed in the event (and I believed them). This would definitely be a battle. 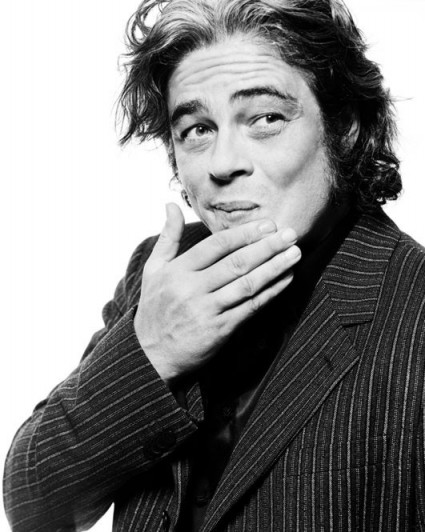 The night of the party arrived and I was working the check-in table hoping I’d get to go upstairs to the VIP room and meet my True Love Benicio (yes, in case you’re wondering, apparently it IS possible to have a million True Loves in your life). The theme of the party was “boudoir”- deep red everything and lots and lots of candles. 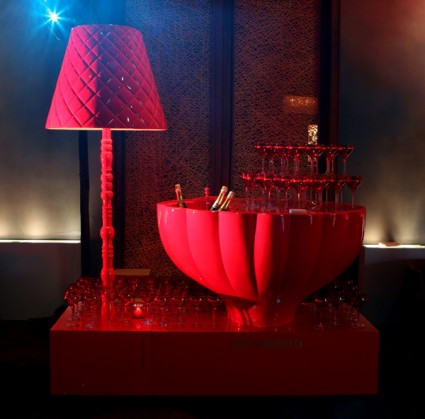 To be sure they’d let me in, I followed the rules and left my camera downstairs. Thankfully, they let me in and one of my friends just happened to be assigned as Benicio’s Press Escort for the day. She came over to me and asked, “Would you like to meet him?” I replied with a resounding “YES!!!!” and she began to guide me over to him to make the introduction. Before we made it to Benicio, I stopped in my tracks, petrified, and asked, “What do I do?!” Her reply? “Breathing would be a good start.” Ouch. But it was true, I was shaking and completely unable to breathe just being somewhat near him. Still, I rallied and once we got to him, she introduced us and I’m pretty sure I continued to breathe (but probably didn’t speak much). To my surprise and delight, he put his arm around me (!) and said, “Where’s the camera?” Yes, that’s the day a little piece of my heart died. It did. It died inside knowing we could’ve had the perfect photo, but I played by the rules and left my camera downstairs. Even though I ran downstairs as quickly as I could, by the time I got back up, no one was allowed back in to the “exclusive area.” FAIL. Even worse? I was allowed to stand in the vicinity of Benicio – I could see him from afar through the candlelight – with little hearts coming out of my eyes – but I couldn’t get back in. Torture! As I stood there gazing lovingly in his direction, I smelled smoke. Holy crap! My hair caught on fire! Damn those candles. Long story short (erm…too late for that), I didn’t get a picture, but Benicio got the privilege of smelling my burning hair. 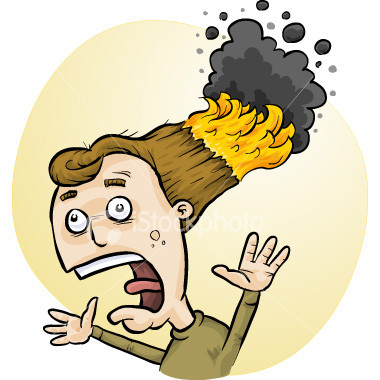 Flash forward ten years – I’ve never seen Benicio Del Toro since that fateful night, so when I saw his name on the Press Release for the premiere of Savages, I literally squealed out loud (at work, no less). Once again,

As it worked well last time, I made another necklace – this time with Benicio’s name on it – and posted a picture on Facebook declaring the day “Benicio Del Toro Day.” 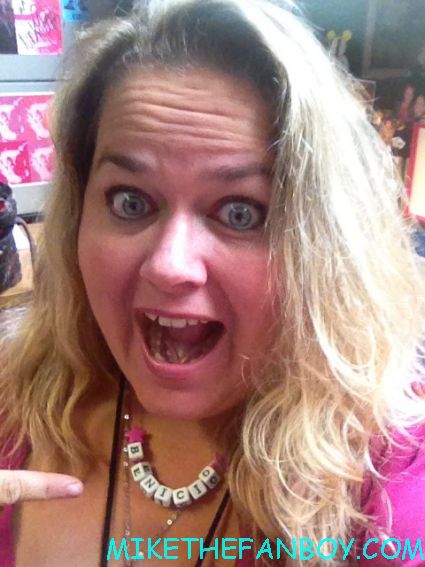 Taking a cue from Mikey and Scotty, I also decided to make a huge sign. While Benicio is an Academy Award winning actor and super fine to boot, I don’t think he has legions of girls squealing over him when he arrives, so I figured I might have a shot at getting a picture if I laid it on thick. 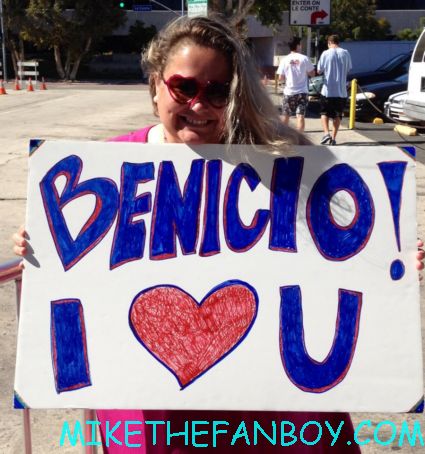 Sure enough, I held up my sign at the premiere as his car drove in and when he got out, he ran RIGHT over to me. WIN! Initially he looked like he was going to try to autograph my sign, but I said I just wanted a picture. He stopped to pose, but it didn’t work. 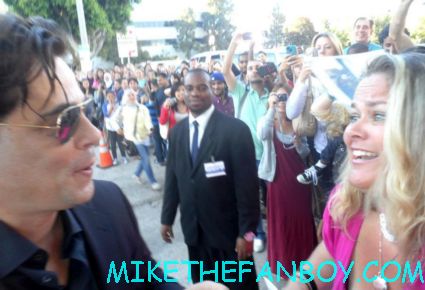 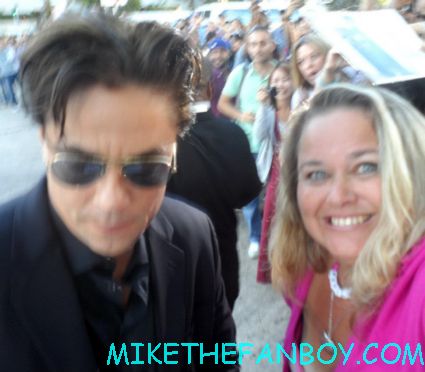 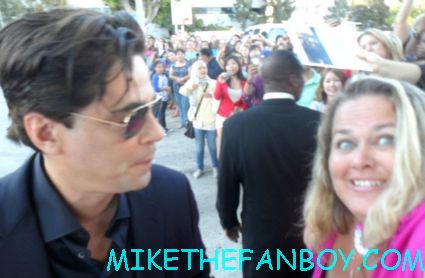 I started to get frantic because you’ve got to move fast and we were in a HUGE barricade. 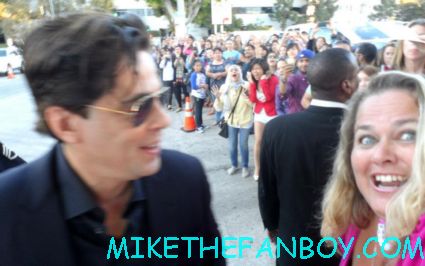 In all I ended up getting FIVE pictures with him and each of them show me losing my mind just a wee bit more. Seriously, by the end I was crazed. Thankfully, one of the pictures was able to work and I could breathe again. Success!!! Thank you, Benicio. Te amo. 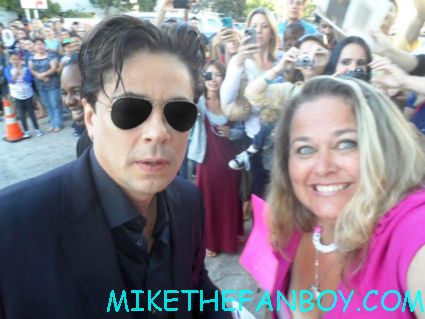