I know so many people out there who love Modern Family, personally I think it’s one of the best shows on television today. Ms. Pinky is a super fan of the series and has made it her quest to get a photo (or 7) with each member of the cast.

This is no easy feat let me tell you. Most of the cast is super friendly but… There are always those couple cast members who are a tad more difficult.

Check out Pinky’s Modern Family recap after the jump!

Hello, my lovelies. Pinky Lovejoy here having some withdrawals from not being able to see any new episodes of Modern Family until the Fall season starts back up. To combat this, I thought I’d share a few fun pictures and experiences I’ve had with the cast of Modern Family. You might not know this, but Modern Family is one of my favorite shows and it never fails to make me laugh. Finally getting pictures with everyone in the cast was a long process, but it finally happened (with the exception of the girl who plays Lily because I’ve never seen her in public, nor did I like the “switcheroo” they pulled last season with the older child). 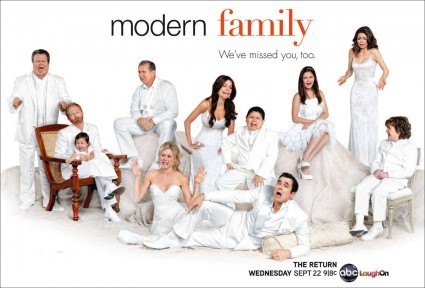 It’s funny – when I first moved back to California a few years ago, I was dying to meet anyone from the show. Now I see them out so much that I don’t even ask them for a picture anymore. Well, unless it’s Ty. I almost always ask Ty because he’s so nice and even recognizes me now. 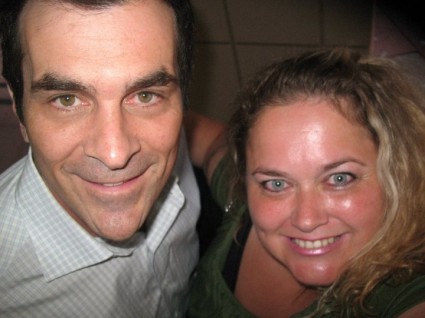 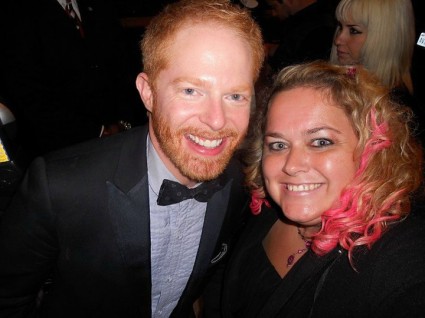 Perhaps I have a soft spot for Ty Burrell (who plays Phil Dunphy on the show) because he was the first cast member I ever took a picture with. We were at a pre-Emmy event in 2010 and he was one of the presenters. Ty was ridiculously nice and such a great guy. Really down to earth. 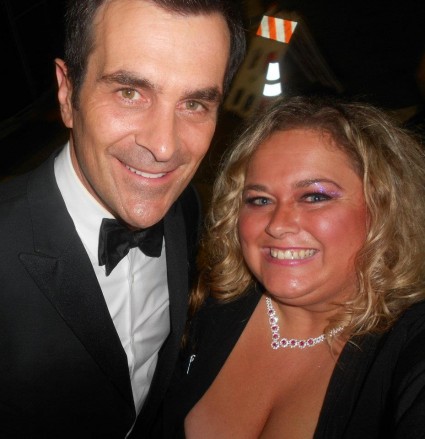 Since then I’ve seen him multiple times and every time he’s as sweet as he was before; in fact, at Sundance this year he gave me a big hug when he saw me. Love him! 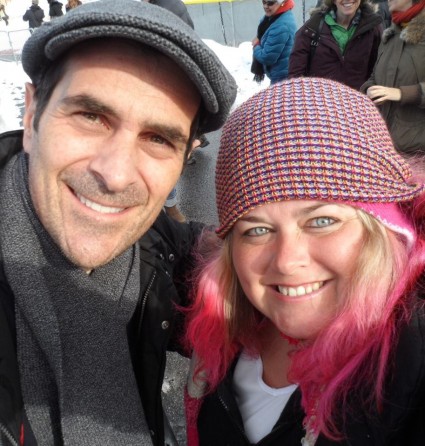 The next cast member I met was Eric Stonestreet (who plays Cameron Tucker on the show) at the Emmy awards after he won in 2010. He was standing in the lobby outside the theater after the show and was holding a phone in one hand and his Emmy in the other. Although he seemed a bit frazzled, he was kind enough to stop and take the picture. 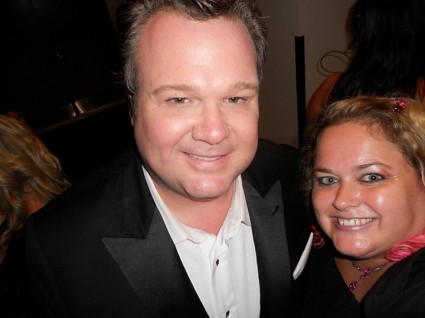 Of course, I look like a hot mess in the picture (did I not know how to apply powder to my face?), but no matter.

Later that same night I met Jesse Tyler Ferguson (who plays Mitchell Pritchett on the show) leaving a post-Emmy party. He was very cool and happily stopped to pose. 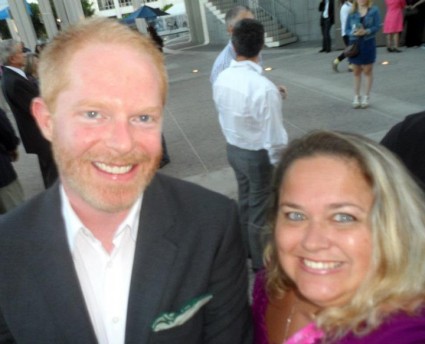 In the few times I’ve seen him since, he always does his best to stop and pose with fans. My fave shot of Jesse Tyler and Eric had to be the group shot we took at a play opening last year. 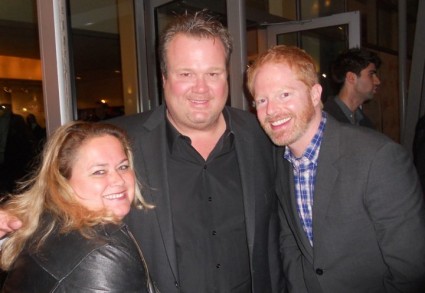 The next week I met Julie Bowen (who plays Claire Dunphy on the show) at a talk show taping. Actually, all four of the adults I’d met were on the show together, but Julie was the only one who came over on her way into the show. 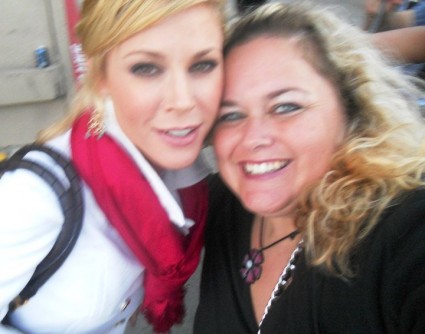 I was stoked because I didn’t want to wait until the end and she was able to take care of everyone waiting super fast. Hooray! 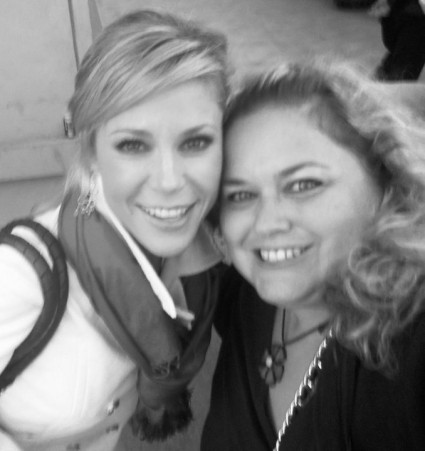 After that, of course, I ended up seeing her everywhere, but my fave pics with her were after her Emmy win last year 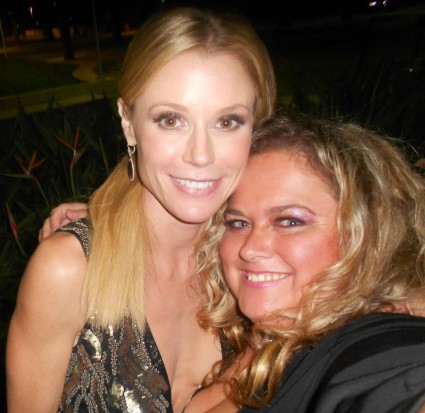 and the group shot I got with her and Ty. 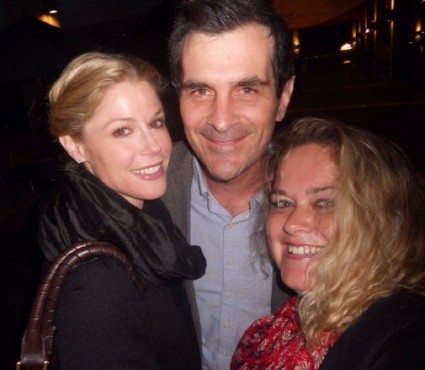 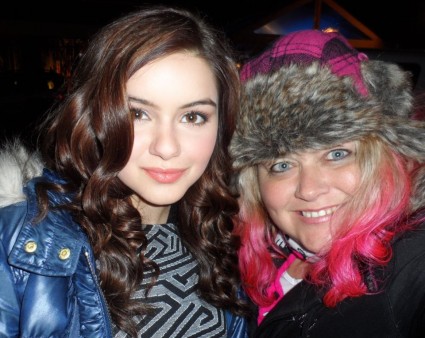 Both of them were super nice and I’ve since met Ariel several times and she’s been just as cool as she was then. 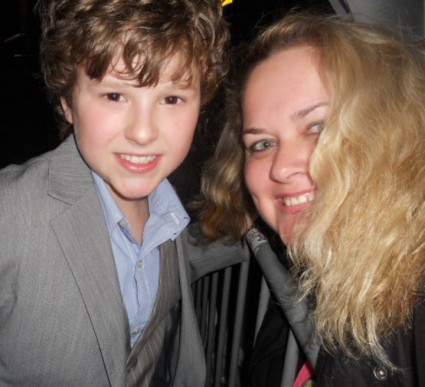 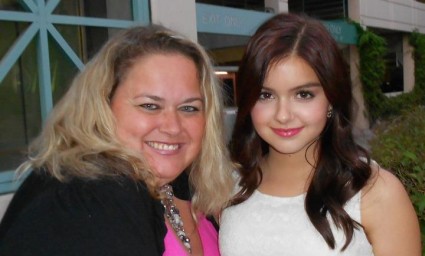 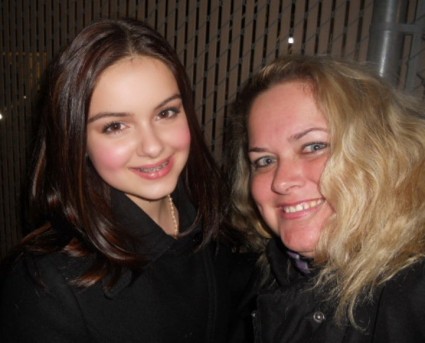 Rico was more of a challenge, but I finally got a picture with him at the star ceremony for Ed O’Neill. 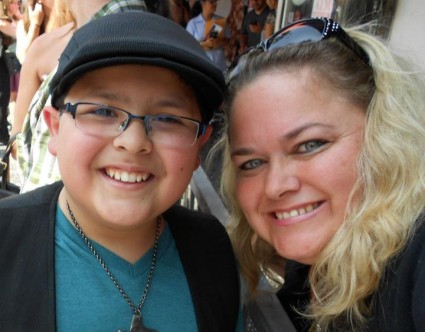 After the People’s Choice awards last year, I attended a party where I was able to get my picture with Sofia Vergara (who plays Gloria Delgado-Pritchett on the show). She was already in her car and about to leave the party, but I noticed a bunch of people gathered around and she was posing with each of them one by one. Although I’m not a fan of car pictures in general, I couldn’t pass up the chance to get a picture with her. She actually handed my camera to her boyfriend sitting in the car and he took the picture. It actually turned out to be one of my favorites because it looks like I have a floating head. 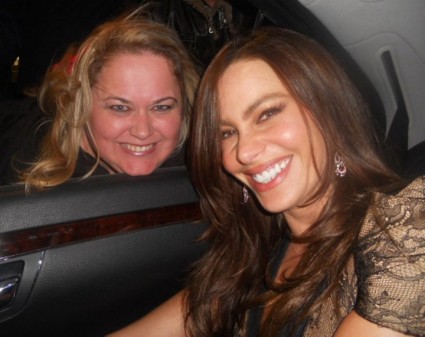 For a long time, I’d met everyone except Ed O’Neill (who plays Jay Pritchett on the show), Rico Rodriguez, and Sarah Hyland (who plays Haley Dunphy on the show). I wasn’t sure when or where I’d see them, but I had my fingers crossed. Then, after about six months, it all happened practically at once. As I mentioned earlier, I met Rico at Ed’s star ceremony. A few weeks later, I met Sarah at a pre-Emmys party (she was SO sweet), 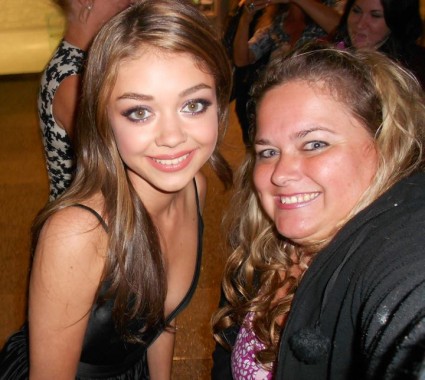 which was the same week I was able to meet Steven Levitan (who created the show). 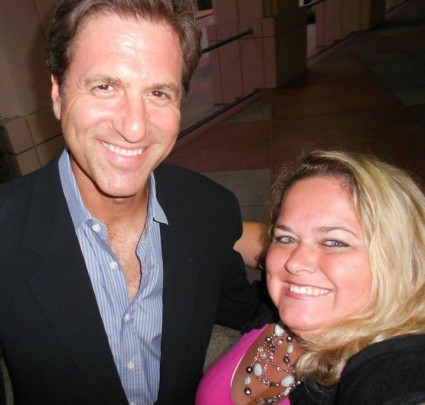 Finally, I was just missing one…the hardest one of all. I watched him greet the crowd at his star ceremony, but he didn’t do any pictures. From what I’d heard, I had my work cut out for me. I hoped I’d meet him at the Emmy awards, but didn’t see him during the show. Then, magically, after the show, I saw the entire cast walk by. Ed was walking with Steven and I briskly walked up to him and asked him for a picture. He said no, he was in a hurry, he was tired, blah blah blah, but I wasn’t taking no for an answer. I can be pretty stubborn when I want to and he was, after all, the last one I needed. I told him I’d been to his star ceremony and how I’d gotten pictures with the rest of the cast. Finally, probably just to get me to shut up, he relented and let me take the picture. Success! 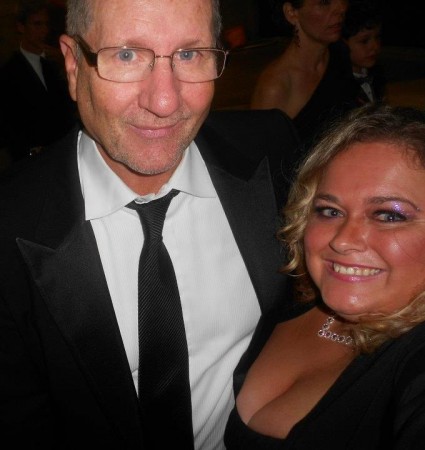 Although I still have another month or two of reruns before the new season, I do have my pictures to keep me company until then (wait…that sounded weird….um….). At any rate, big thanks to the cast for being so fan friendly…even you, Ed, who finally caved for a persistent pink-loving girl. For additional pink fodder, please visit www.pinkylovejoy.com or follow PinkyLovejoy on Twitter. As always, have a pink day!