Home / Fanboying! • Pretty In Pinky • Stars of the 1980's and 1990's / Pretty In Pinky Says Here We Are Face To Face A Couple Of Silver Spoons To Ricky Schroder! Autographs! Photos! and More!

Oh Ms. Pinky. She is at is again kids! Pinky loves… and I do mean LOVES her some Silver Spoons, yep… “Here we are, face to face, a couple of silver spooooooonnnnns…” Oh, that theme song… Why is it ingrained into my memory… WHY LORD WHY! But more than Silver Spoons Pinky loves her some Ricky Schroder!

Anyway, Pinky is sharing her latest encounter with the childhood icon at a charity event of all places. If Ricky is out Pinky will find him!

Hello, my lovelies. Pinky Lovejoy here excited to have, once again, run into my True Love, Ricky (yes, he’s back to being Ricky, not Rick) Schroder. In case you forgot, my love began way back when he starred as Ricky Stratton on the beloved TV series, Silver Spoons along with Alfonso Ribiero and Jason Bateman. I loved that show and, more specifically, anything and everything having to do with Ricky. I wrote him fan letters, dreamed about meeting him, and planned our eventual wedding in my mind (don’t judge me). My room was covered in pictures of Ricky – every possible inch (including the entire front side of my door) had his blonde locks and blue eyes staring back at me. To surprise me, my mom had his face created in frosting as the topping for my twelfth birthday cake. I (proudly) ate his lips. I met Ricky Schroder for the first time a few years ago when he was speaking at a conference in Salt Lake City, Utah (where I was living at the time). I went prepared with the same black rubber intertwined bracelets that “The Ricker” wore on the show and a note to myself to not freak out. I was on “high alert” to try to reign in my love for him and act normal around him (well, as normal as I could be) and I pretty much succeeded. 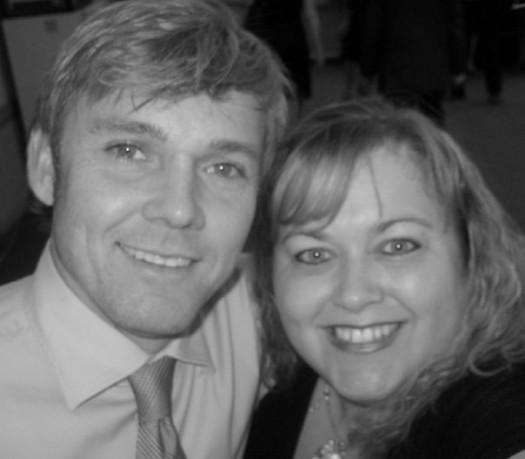 He loved the bracelets (even showed them off to his wife) and asked if I could sing the Silver Spoons theme song – I told him, “Of course! I have it on my iPod.” We took a few pictures and I didn’t say anything too stupid. Success.

Shortly after moving to LA, I ran into Ricky again by chance after a premiere. 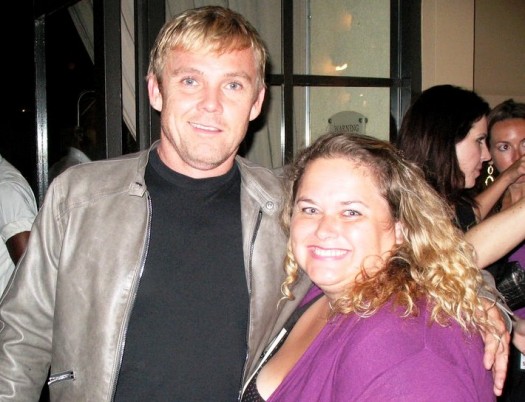 As I was caught off-guard, I didn’t have time to prepare myself and blurted out the entire birthday cake story. FAIL. His response? “You ate my face?” Mistakenly thinking I was somehow making things better, I replied, “No, I ate your lips.” WHY IS THAT BETTER?!!?! What is wrong with me???

Several weeks ago Ricky was on the list to attend the John Carter premiere. Although I generally dislike huge premieres and had never ventured to the theater John Carter was held at, I rallied for my guy and went to see if I could have him sign my Silver Spoons DVD set and our original picture together. Sadly, he never showed up and I now drive around with Silver Spoons in my car at all times.

To my surprise and delight, yesterday Ricky Schroder arrived at a charity event I was at. As he wasn’t on the list, it was unexpected and….sadly….maybe, possibly, caused me to lose my mind a little bit. To quote Mikey, I totally “pulled a Pinky” when he got out of his car. All I had to hear was, “Ricky Schroder’s here” and I started screaming his name at the top of my lungs. (Did I mention I was a cheerleader? I’ve got some lungs to really yell when I want to). I yelled his name again and again until I wore him down enough to come over. Really, he had no choice (otherwise I never would’ve stopped screaming) – and when he came over he said, “OK. You’ve got my attention.” 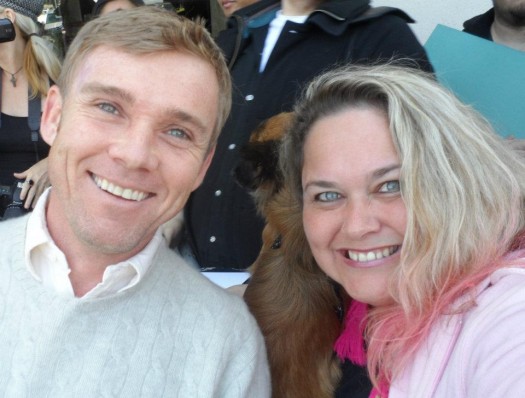 Again, the birthday cake story flew out of my mouth (WHAT THE HELL IS WRONG WITH ME?!?!), although this time he wasn’t really paying attention, so I probably got away with it. He did, sadly, think Sammy was going to bite him (like my dog would hurt a fly), but I assured him he was fine before we took our picture. I love the new pic – he’s smiling big and looks happy to be there even though I think he might secretly think I’m a crazy person (which, let’s face it, I probably am – at least where Ricky is concerned). I can’t help it – he’s The Ricker!