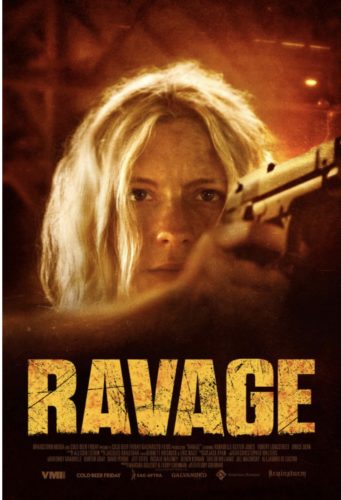 Annabelle Dexter-Jones scares up the screen in the survival story “Ravage.” It’s a frighteningly fun and fresh film perfect for a double feature and a fantastic fix for horror fans everywhere.

Wild-life nature photographer Harper Sykes (Annabelle Dexter-Jones) is on assignment in the secluded Watchatoomy Valley woods. While capturing some stunning shots, Harper witnesses a man being brutally beaten in the woods and flees to alert the police. After reporting the incident to the local sheriff, the culprits capture Harper and take her to an abandoned farm. Fearing torture, Harper must rely on her survival skills to outsmart her capturers and outrun the Ravener (Robert Longstreet).

“Ravage” reeks realistic havoc with one of the must-see horror movies of the year. Horror movies like “Ravage” are why the horror genre continues surprising, scaring and spreading joy year after year. “Ravage” is exactly why you can’t ever dismiss the genre and proves hidden gems are always abound within the horror community. Teddy Grennan kills it in his writing and directorial debut.

Starring  Annabelle Dexter-Jones, Bruce Dern and Robert Longstreet, “Ravage” is the type of old-school scary movie you enjoyed visiting the drive-ins for back in the day. Talk about perfect timing! “Ravage” recreates a bygone era and feels flawlessly timeless almost akin to classic horror cinema in the vein of Sean S. Cunningham, Tobe Hooper, and Wes Craven during the 1970s. There are glimmers of “The Texas Chain Saw Massacre” and “The Last House on The Left” vibes with hints of “I Spit On Your Grave.” The remarkably realistic situation is eerily entertaining and a non-stop thrill ride thanks largely to Annabelle Dexter-Jones. 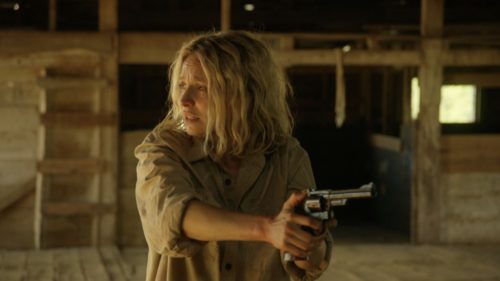 Attention horror leading ladies and Scream Queens, please get ready to welcome Annabelle Dexter-Jones to the club. Not only does she join the group of harrowing horror protagonists, but also fantastic female badasses such as Ellen Ripley and Laurie Strode (“Halloween” 2018) as a strong female character who is willing to fight her way to survive. Harper’s harsh reality and problematic predicament could have made her a damsel in distress or another “final girl,” who somehow manages to be the sole survival from a horrific ordeal. Instead, Annabelle Dexter-Jones’ Harper demonstrates an ordinary woman refusing to die quietly and will do whatever it takes to survive. She looks death in the eyes and rises to the occasion.

Characters like Harper are why you enjoy horror movies and she has a formidable foe in the Ravener played by Robert Longstreet. The menacing movie character is a worthy adversary, but the only complaint is the ragged, rushed timeframe. At barely less than 80 minutes, “Ravage”  could’ve used another 20 minutes to unpack some scenes and dive deeper, but the visceral visuals certainly deliver with this scary survival horror movie, especially the cow sequence. Probably the most similar horror movie would be “Wolf Creek” with the style and tone of “The Texas Chain Saw Massacre.” Considering the short runtime I would suggest creating a double feature if possible, but be prepared for a good ol’ time.

“Ravage” opens at select DRIVE-INs on August 14th and August 21st via Video On Demand.