I love random encounters! It is one of the benefits of living in Los Angeles, sometimes you just run into someone just going about your day. Suddenly Susan was out and about with her friend on 3rd street in Santa Monica and guess who she ran into?

None other than Goodfellas star Ray Liotta!

I think because we so often plan out every little detail associated with this hobby, it’s super exciting to have a random, unplanned encounter.

I recently had one of my oldest and dearest friends visiting from Arizona. In addition to all the typical Hollywood hot spots, we talk a drive down to the 3rd Street Promenade in Santa Monica. I turned to check what street we were on and standing behind, literally inches away, was none other than Ray Liotta! He had a backwards cap on and was wearing sunglasses, but there was no fooling me. I’m positive he saw my face lit up with recognition. I waited until he walked past and pointed him out to my friend.

After concurring that it was indeed Mr. Liotta, she wondered, what do we do? I’m actually a big fan of his work and apparently her husband is a BIG fan too, so I told her I had no experience with Ray, nor did any of my pals at MTF, at least none I knew about. So, I laid out the options if we approached him for a photo: one, he’ll do it; two, he politely decline; and three, he tell us both to fuck off. I was in if she was, so I left the decision making to her.

She opted to try so we waited outside the store he was shopping, fake chatting, with her facing the door. A few minutes passed and in mid-sentence I see her face light up as she said, “Ray, oh my God can I get a photo with you.” The next thing I hear is that distinct voice saying “what are ya, stalkin’ me?” My heart sank, but was uplifted seconds later when I realized Ray was being playful. As my friend bumbled that no, we were waiting for, blah blah, Ray said “yeah, yeah, you’re stalkin’ me.” She told him she was on vacation and I think he assumed we both were.

I took the photo with Ray and my friend and he asked if I got it ok, “cause she’s kinda short.” I assured him I got it just fine and moved in for our photo. 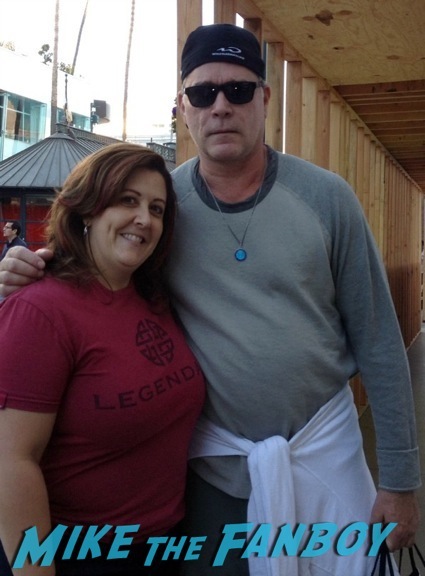 Then he asked if “you want one together.” Sure! We each got on a side and he gave us a big squeeze and told his teenaged daughter to take the photo for us.

Even though he looks grumpy in the photos, Ray could not have been nicer. What a class act. I was so happy my friend got to meet a celebrity and he was a good fella about it. 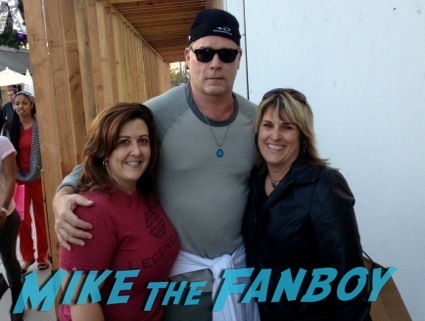