People tell me, I really need to give up on certain people that I’m of, and many times I’m like “no, they couldn’t do it, etc…” Always making excuses, or just leaving an event with a bad taste in my mouth.

Well… I think today, I’ve officially given up being a fan of Reese Witherspoon.

I’ve been with her since Freeway, and Election and honestly before anyone knew her as anything but Ryan Phillippe’s wife. You can ask Scotty about how big of a fan I was if you don’t believe me.

I used to love her. Like, she was one of my top favorites, I would see everything she was in, etc…

But even on the awards circuit last year, she wasn’t nice AT ALL.

I went to a q and a, which you may have read about that debacle? If not you can see for yourself.

My friends say, “Why do you do this to yourself, you know she’s nasty.”

I say, “But I’m hoping that there will be that one event, that makes me love her again… i.e. Sarah Michelle Gellar.”

Ahem… That’s not be the case with Reese Witherspoon.

Last night was the premiere for the soon to be classic Hot Pursuit. 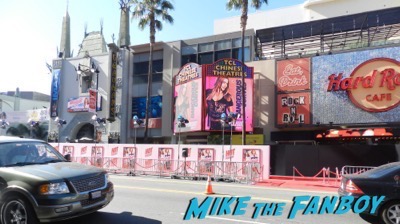 I didn’t expect there to be a huge crowd, but at 5:45 when you only have Chris, Tim, myself and some looky-loo’s that’s pretty bad.

The premiere was… well… boring. There really was no reason to even go except for the 30% chance that Reese might cross. Let’s be honest Sofía Vergara is nasty to fans. Personally, I used to think she was funny during Modern Family season 1 but she hasn’t been relevant for three years and her “schtick” is more than getting old. 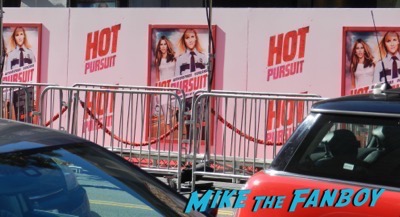 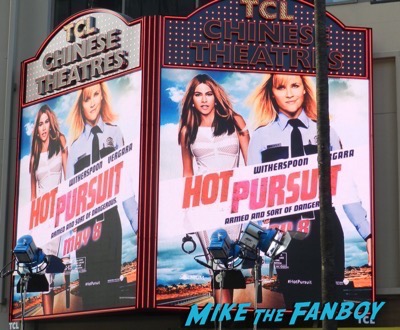 Joe Manganiello arrived and he didn’t look over, didn’t wave, nadda. To be fair… I don’t think anyone cared. Magic Mike he’s not.

Then we waited another 20 minutes. 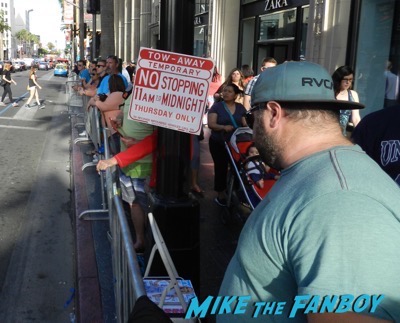 Reese Witherspoon arrived. We yelled for about six minutes. She looked over, and asked her “security” if she can sign. He said no. She shrugged and said, “I can’t cross the street.” 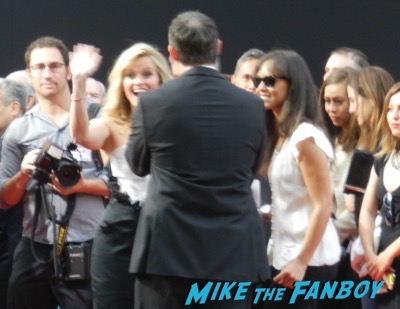 Really? Stan Lee’s 92 years old and he can cross the street… Oh but he doesn’t wear heels, so I get it…. (insert sarcasm here) 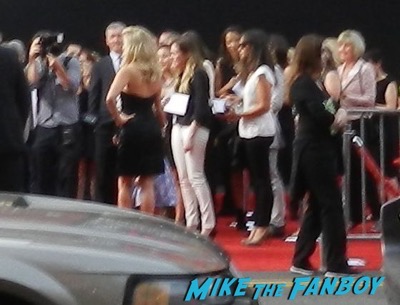 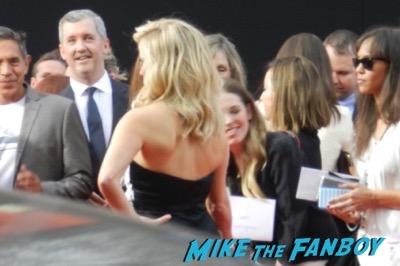 So, everyone in my section, and by everyone I mean the four of us who are waiting for Reese head off to the other side. To do what her security asked.

Now, at this point, Reese is already headed to the carpet.

So, she already said no, my hope was she would do it on the way out, or actually do what her security said she would do.

I was able to make it an entire city block to highland, cross the street, and get in place. Once I was in place, where we were told to go, I look up and there’s Reese crossing the street to go where we were originally standing.

So, I ran across the street in traffic and Reese just decided to leave. She she crossed for a whole 45 seconds, which I know is a lot because… I mean… she HAD TO CROSS A STREET!

I can chalk this up to miscommunication and bad timing, but… when it’s happened about five times in a row… I’m calling it.

I’ve got a Legally Blonde, Wild, Freeway and Walk The Line mini poster up for grabs, who wants them? Because I surely don’t need them?

Oh, Charo… I mean Sofía Vergara crossed, and signed five… yes five things, and I’m told it was only for people who spoke Spanish to her.

Nice… I didn’t realize that in this hobby I needed to learn another language to get a scribble. Who knew.