Revenge of the Nerds is one of the seminal films for kids of the 1980s. And I’m only a little bit jealous that Russell was able to meet the cast at a recent reunion q and a. I wish there were more reunions like this in our area, especially for iconic 80’s films.

A lot of the cast showed up to the event and Russell was even able to chat with them. That’s pretty cool.

Revenge of the Nerds!! Nuff said. Most of us above 40 grew up with this movie and probably like me have used one of the iconic lines of the “Hair Pie”, “Party Party Party”, or “We got bush” or have even imitated Lewis’s laugh. Most of us wish we could have been Lewis and have a nice fling in the Fun House with Betty Childs.

As part of SF’s Sketchfest they had a 30th Anniversary reunion with a Q and A and screening of the movie and I had to go. It was being held in the city and of course it was the 2nd rainy week of the season (I’m not complaining as CA needs the rain) so go figure. My wife and I arrived at 730pm (supposed to start at 830pm) and already a line of about 50 or so folks standing in rain to get in. I kinda scoped out the area since I had never been to the theater and really only 2 entrances and figure they would arrive in front on a rainy evening since it was coned off.

They let everyone in around 7:45 and we decided to sit in the back on the aisle. I thought there would be more “collectors” outside but maybe because of the rain that caused a lack of audience. The cast did come in the door and I was really the only one waiting to see if I could get a few to sign my poster, but there was one security person and she blocked me from disturbing them while they headed upstairs. I did manage to get Brian Tochi (“Toshiro Takashi”) and he was as nice as can be and took a picture. I told her I know she was just doing her job and she said, “Don’t worry there will be a lot of opportunities”. 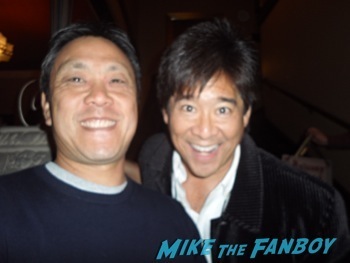 Upstairs they did some photo shoots with Chris Hardwick as he was the moderator. In speaking to Mr. Hardwick later after show he told me how he requested to do this event as this movie was a coming of age movie for him and his career.

The Q and A started at 830PM as the crowd started chanting “Nerds, Nerds, Nerds….” as it was a full house with folks decked out in Lambda Lambda Lambda sweaters and shirts. The cast got a great ovation and I don’t think I would recognize anyone on the street except Larry Scott (“Lamar Latrell”) and Curtis Armstrong (“Booger”). 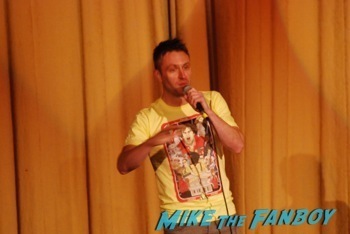 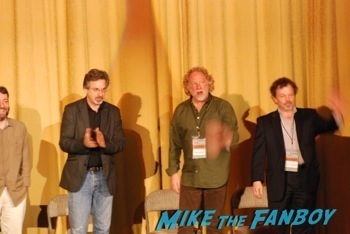 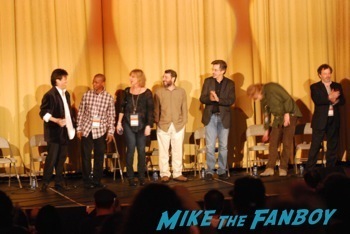 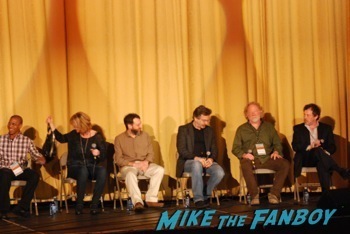 As most of us know, Chris is a great moderator and asked great questions surrounding each of their auditions and going down memory lane. Highlights of the night were that “Lewis” still had kept his original pocket protector, “Poindexter” originally interviewed for “Gilbert” and went to a eye doctor to get some nerd glasses, 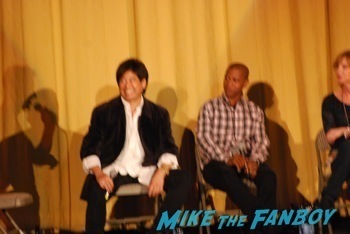 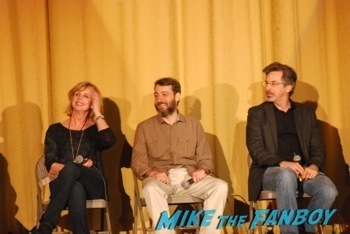 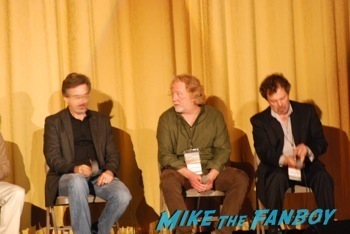 “Lamar” busted out the Nerds rap from movie as the audience sang along, “Booger” revealing it was not him burping (see video), “Lewis’s” laugh, and classic lines repeated (“hair pie”, “party party party”, “we got bush”, “what the fuck’s a frush”). A classic stroll down memory lane. 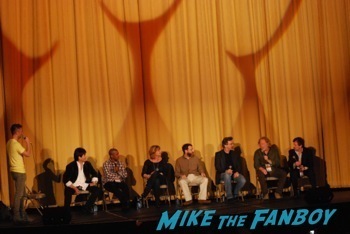 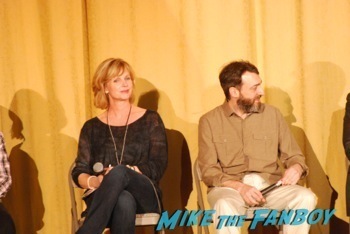 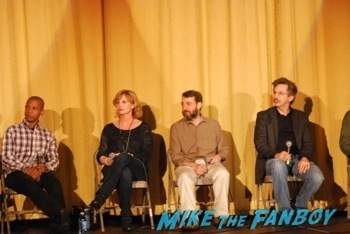 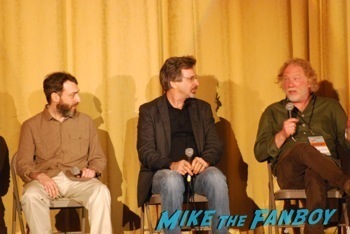 Around 915pm the movie started so I went out to the lobby figuring that the cast would not be watching the movie and sure enough they came out. 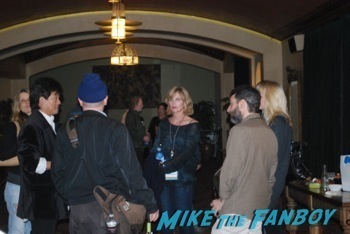 There were only 3 of us that had things to sign (the other 2 had DVD covers) and the other folks just wanted to take pictures. Two women wanted “Wormser” to stand by their boobs and give that look he did in the movie and he obliged after saying that the divorce papers are in the mail. 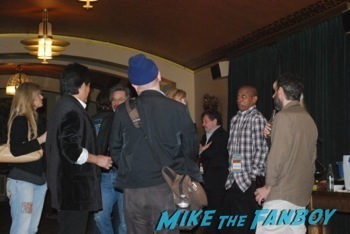 I actually had a long chat with “Wormser” out of all the people and he had just flown out from NY that morning and was leaving in the morning. He said they really don’t get together that much, but keep in touch via texting and phone, as this was only the 3rd time they’ve gotten together (they did a Frank and Son’s show he said) since the last movie they all did. Also I didn’t know Melissa Gilbert (“Little House on the Prairie” for the young ones) was married to “Poindexter” so she was there and I asked her to sign my Nerd poster as well. She said “But I’m not even in the movie”. I just replied “But you married a Nerd so you deserve to sign it”. 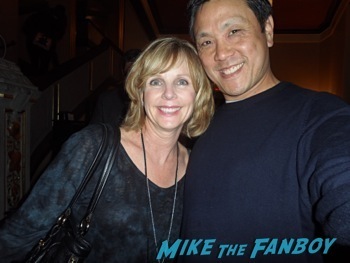 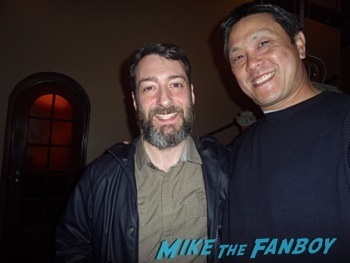 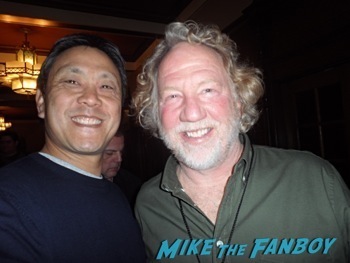 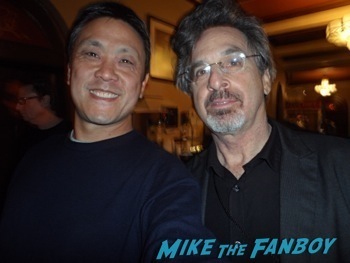 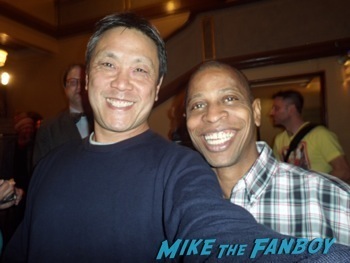 Finally, I did have Chris Hardwick sign my Walking Dead poster and told him condolences regarding the passing of his dad last year. He sincerely appreciated that and we chatted about The Walking Dead and Breaking Bad as well. Cool guy. 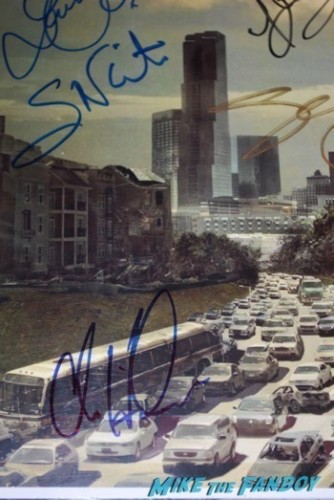 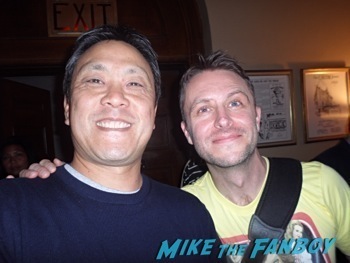 My wife and I decided to bail as we were hungry and I’ve seen the movie over 20 times. Not sure if this movie works in today’s world since “Nerds” are the cool ones now and discovering the Apples or Googles nowadays. Stay tuned for “Revenge of the Jocks”!! 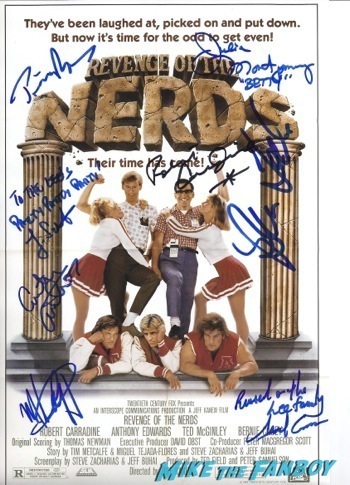