Home / Fanboying! • Jack • Sexy... damn sexy / Richard Gere Success! Jack And I Get To Meet The Pretty Woman Star At A Screening Of Arbitrage! Autographs! Photos!

Jack and I had a pretty amazing night. He was kind enough to let me know that there would be a rare Q and A screening of Arbitrage. I wanted to see the movie anyway, and the chance to meet Richard Gere was too tempting to pass up! Plus, I had a Pretty Woman mini poster already signed by Julia Roberts so… Why not finish it right!

Jack had a great idea to tag team this write up, so he wrote the bulk of it and I’m going to interject here and there. Also, I’m sorry the pictures suck! It was so dark in the theater I could barely get anything!!!

A Freeway Closure and a Gentleman

I love being an active and avid filmgoer. Honestly, if I wasn’t proactive with embracing film programs and organizations I would have missed out on some cool opportunities. Last Friday I attended a Q&A with Richard Gere and to be honest I didn’t know what to expect. My last several Q&A experiences have been truly hit and miss.

Whenever I attend Q&As with filmmaker/actors there’s one rule I try to abide by: only attend if it’s a movie I genuinely want to see. The times I ignore this rule, the evening turns into disaster like Sean Penn (“The Indian Runner”), Spike Lee (“Red Hook Summer”) and Samuel L. Jackson (“Resurrecting The Champ”). However, not only am I a huge fan of Richard Gere (“Primal Fear,” “The Hoax,” “An Officer and a Gentleman,” etc), but “Arbitrage” was a film I was genuinely interested in seeing.

After buying my ticket (front row, middle seat) I notified Mike that Richard Gere would be doing a rare Q&A appearance in the LA area. Mike decided to attend, but he didn’t know if we would be sitting next to each other since there were two seats sold in the front row middle when he bought tickets. We hoped for the best.

4:42 p.m. -Mike texts me and informs me the 405 Freeway is partially closed due to a fire near The Getty Center. Now I have to drive through the 5 to the 170 to 101 and hit Hollywood Bowl Traffic once I get off work at 5 p.m. from Ventura County. It’s going to be a long, bumpy ride.

M- Traffic was a cluster Fuckish nightmare… Literally, I wanted to rip my hair out!

After getting off work I stop home to change out of my suit and gather my memorabilia before taking off at
5:45p.m. I’m bringing two DVDs (“The Hoax” and “Primal Fear”) and my Japanese laserdisc of “An Officer and a Gentleman.” I now have less than 90 minutes to make it to Century City, avoid the 405, avoid Hollywood/Highland and drive through Beverly Hills during peak after work traffic. Sounds manageable…I hope.

6:30- I finally hit Hollywood and Highland after getting off Cahuenga Blvd to avoid the Hollywood Bowl traffic and make good time. However, due to incompetent drivers my progresses appears to be a wash, but I eventually make up 20 minutes by taking side streets.

7:10- Just arrived at the movie theater in Century City, but the parking garage is horrendous. It takes me an eternity (okay, it was only two minutes) to find parking. Still, when you’re running late everything seems like forever.

7:15- After passing by several autograph dealers outside the theater I pick up my ticket at Customer Service. However, four obnoxious people are in front of me as we’re going down the escalator and keep cutting in front of me playing a version of musical chairs on the escalator. As it turns out, they’re all sitting right next to me in the front row (two middle-aged women, a twentysomething/teenage girl and one middle aged man). Even better, one of the ladies in the group is sitting in my assigned seat when we get inside. She reluctantly agrees to get out of it once I show her my ticket stub or rather her husband tells her to “get over here” in Mandarin. Now I’m sitting next to a random guy (on my left) and an obnoxious young lady incessantly texting from the escalator group.

7:20- Mike, shows up and I flag him down literally moments before the movie starts and awkwardly say hello before the film starts.

About a third into “Arbitrage,” the digital projector looses sound and at first, it seems aesthetically pleasing. However, it becomes obvious there’s a problem after 30 seconds without sound when an usher notifies the audience they’re working on it. The usher adds, the film should be back to normal within a few minutes once they rewind it five minutes. This speech was repeated twice more and during the last time, the usher announced we would receive a free movie ticket for our patience.

During this time, Mike and I properly say hello to each other joking about how bad the night has gone thus far: A) 405 Freeway shut down/severely backed up due to fires, B) Both of us running late to the movie and C) “Arbitrage” freezes during opening weekend. During the break, Mike informs me he brought a “Pretty Woman” piece signed by Julia Roberts and a vintage Rolling Stone while I brought “An Officer and a Gentleman” Japanese laserdisc and two DVDs (“Primal Fear” and “The Hoax”). We hope for the best at this point.

M- I admit Jack’s laserdisc is pretty rad… But I get the trump card by having Julia Roberts! LOL…

After 10 or so minutes, people from the back jockeyed to the front since some filmgoers left for refunds and others occupied unsold empty seats. The guy sitting between Mike and I discussed how much he would be disappointed if Richard Gere didn’t show up after everything that transpired, especially since there was a Q&A with Channing Tatum and the cast of 10 Years happening nearby. Although we shared his sentiments we didn’t want to agree with him and hoped for the best. After about 20 minutes or so the film was up and running.

Once the film ended around 10:15, panic hit me since ushers weren’t rushing to set up chairs and chairs weren’t in our sight. Although I loved the film and truly believe Richard Gere finally might be nominated and win his first Oscar, the fact I went through all of this “just to see a movie on opening night” will be an utter disappointment unless Gere does a Q&A. Then from the corner of my eye I see a silver haired gentleman holding a coffee in his hand and excitement took over.

As people were leaving, they realized Richard Gere was in attendance and decided to stay for the Q&A. While looking around I notice a woman with an autograph book (or rather a small notebook) approach Richard Gere as he is waiting and they exchange a few words, but she didn’t obtain an autograph.  Typically, this is never a good sign when someone asks for an autograph before a Q&A.  Shortly thereafter, Richard Gere and co-star Nate Parker are introduced by one of my least favorite moderators, Pete Hammond.

Richard receives a standing ovation from the crowd and he is truly flattered. 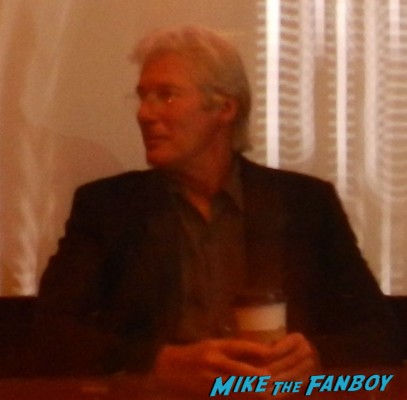 Throughout the Q&A, Richard Gere came up with clever answers and was genuinely charming. If I wasn’t a fan already, his clever commentary and charm easily would have won me over. 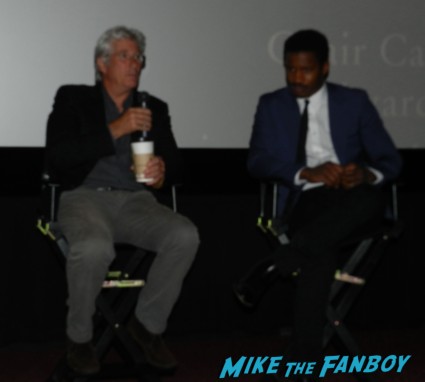 M- I have to say, Richard Gere was more than charming during his Q and A just like Jack said, and in fact I was more than impressed with how charming he was! He was very self deprecating and down to earth. 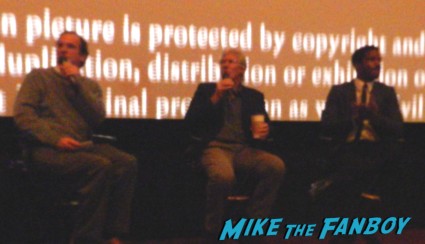 Probably one of the funniest answers Richard Gere gave was responding to an old German lady, who continuously kept asking questions (even though she was never called on). She repeatedly said she loved him in “that one movie with Julia Roberts” and described “Pretty Woman,” but didn’t like that answer when people responded for her. So when Richard Gere responded “Runaway Bride” the theater burst into laughter. 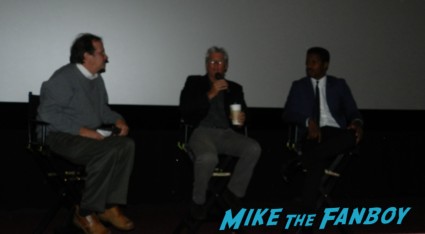 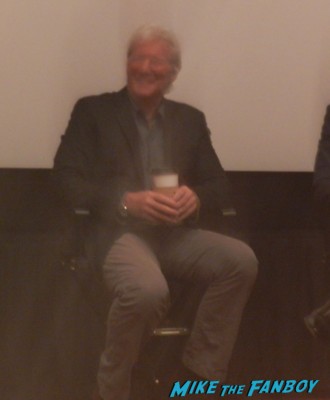 The last question asked dealt with Richard Gere’s opinion about never being nominated for an Academy Award and winning awards in general. Richard admitted there was only one time when he was shocked and that was being snubbed with “Chicago.” 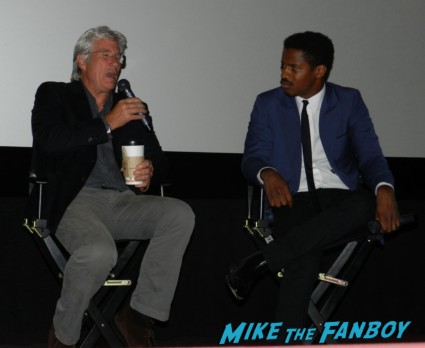 Whether you’re a fan of the movie or not, its undeniable Richard Gere steals the movie and he jokingly said, “Everyone else got nominated and it was like, really?” 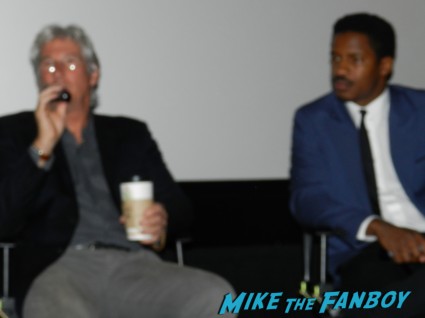 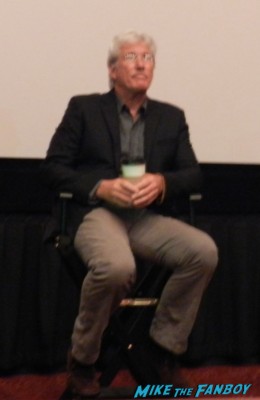 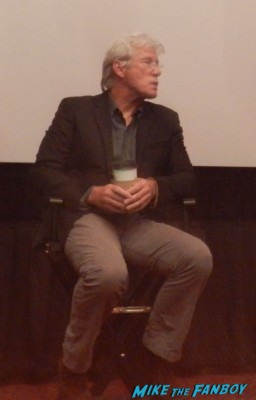 Once the Q&A ended, both Mike and I reached for our stuff. At first Gere started leaving the theater (still with his coffee in hand) and at the last minute decided to come back. He graciously agreed to do this “quickly” and immediately went for Mike’s “Pretty Woman” poster signed by Julia Roberts, but when he saw my Japanese laserdisc for “An Officer and a Gentleman” he grabbed my blue sharpie instead. He was really impressed I owned a “Sample” Japanese laserdisc and graciously autographed it before signing stuff for Mike. 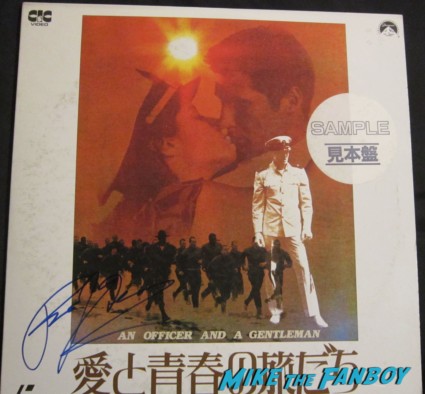 After he took a picture with someone I managed to get my DVD of “The Hoax” signed and he was really happy to sign the film. 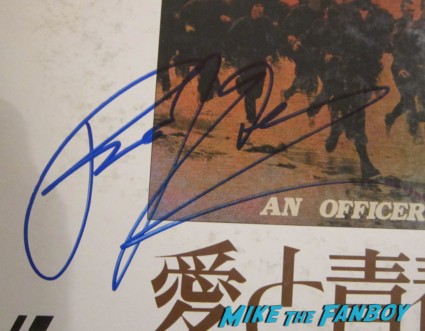 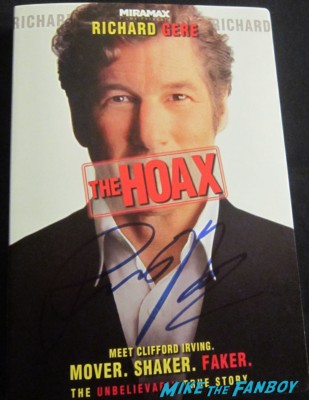 I then debated about trying to get my “Primal Fear” DVD signed, but I didn’t want to seem greedy. Gere signed only a handful of autographs, maybe 10-20, before leaving. When Mike and I left, we discovered all the dealers outside completely missed him before and after the screening.

Overall, both Mike and I got two autographs each and a free movie ticket despite the 405 closure, missing the previews, and the movie malfunctioning. I love when “bad nights” turn out to be blessings. Until the next time, happy autograph hunting.

M- This was a great night. Richard took time and signed in the perfect spot on the mini poster. I’m super happy that this worked out so well and it was so calm! 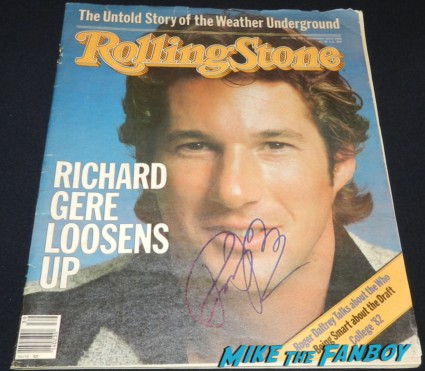 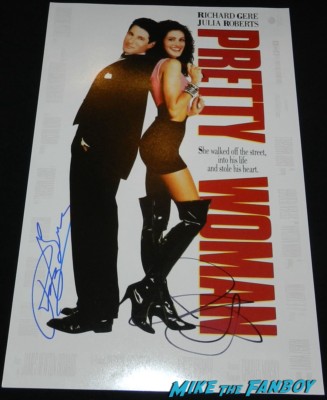