With the lack of things happening in Los Angeles, there’s been sort of a draught here. Blech… Combine that with the heat and you have a bunch of unhappy fanboys.

Billy Beer headed out to the world premiere of Riddick. The third part in the Pitch Black series starring Vin Diesel. I actually was going to head down myself but at the last minute couldn’t. I’m curious about this movie. I liked Pitch Black but the Chronicles of Riddick I couldn’t sit through, so I’m hopping with the shorter title will come a better film!

Welcome back to Billy Beer’s Barstool. Well, one thing all this
fanboying has done is take away from one of my other loves, which is
going to baseball games. Well today, I decide to do both. If I’m going
to be sitting in 100 degree weather, I’d rather watch my Tigers or
Cubs play, then listen to people bitch about Ben being Batman for 4-5
hours. Then when the sun goes down, I’ll run over and see how Vin
Diesel is doing at his Riddick Premiere.
  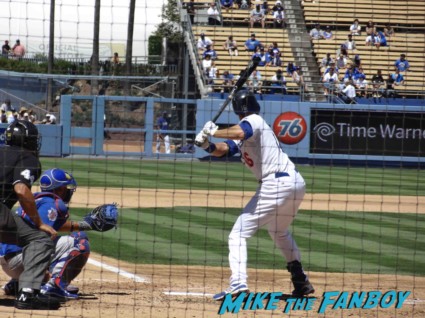 I won’t bore you with the details of the baseball game (maybe cause my
Cubbies lost to the Dodgers) You can read the sports sections for
those details. I did get a few autographs from some of the players
including Travis Wood from the Cubs,
  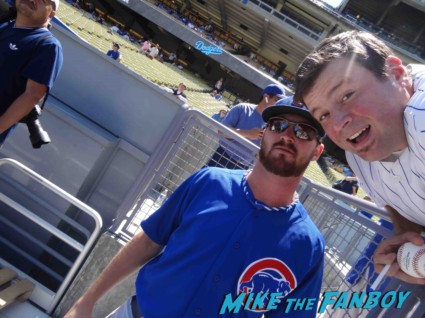 and Adrian Gonzalez from the Dodgers.
  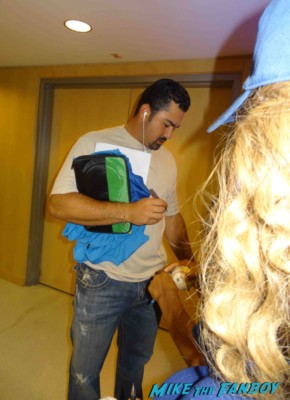 I also got a picture with one of the greatest woman’s basketball
players Candice Parker.
  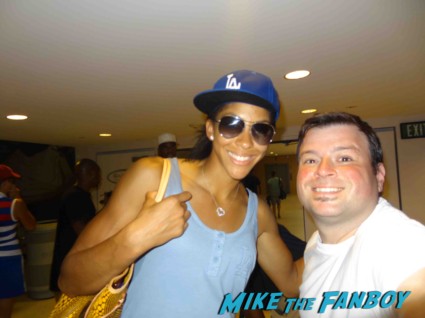 Off the the Premiere. When I get there I was hoping to have a spot
saved, since almost every article you’ve read with me in it lately
refers to the fact I might have been nice enough to hold other people
spots. Luckily, when you’re respectful to some people, they are
respectful back. A couple of friends were nice enough to squeeze in a
little closer and fit me in. For that I say thank you people who know
who you are.

I really don’t have a lot of things to get signed today. It’s
basically leftovers from the Vin Diesel Star. I’ve got a Vin and
Michelle combo shot that I got Michelle on and still need Vin, a
Riddick 8 x 10 movie poster, and a picture of me and Jon Voight. I
bring my folder of extra 8 x 10’s too just in case someone else shows
up.

The first person to arrive is Bianca Lawson. I guess she’s from Teen
Wolf. I don’t have anything for her, so I just get a picture.
  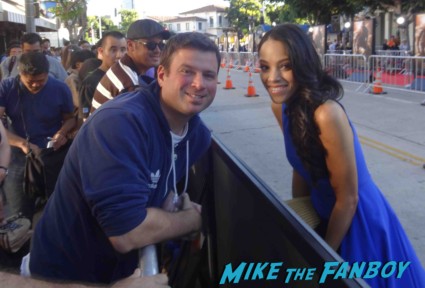 Next to arrive is Cake Boss Duff Goldman.  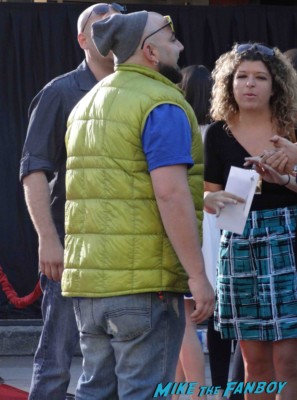 Followed by Alexandra Paul….WOW the big stars are all here!!!
  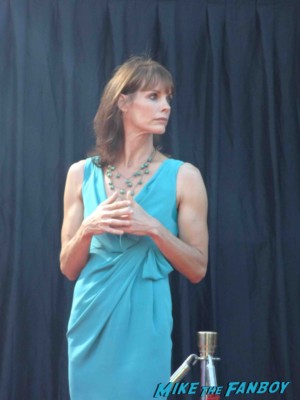 The Director David Twohy arrives. After a slight wait for him to hug
everyone, he comes right over. He’s super nice, it just takes a while
for him to get over to us cause he’s signing and taking pictures with
everyone. He seems extremely happy to be getting all the love from the
fans.
  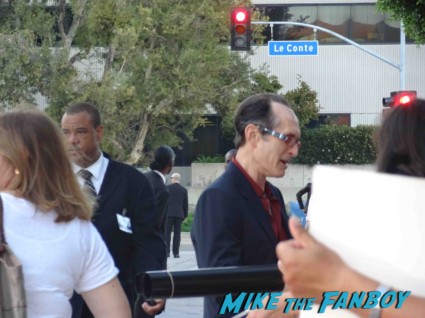 After he passes my jaw drops to the ground. Let’s just say the tape we
used to hold down our pictures was not the only use for tape today.
Tricia Helfer found another way to use tape. Ummmm, trying not to
sound like a 6th grader, but BOOBS!!!
  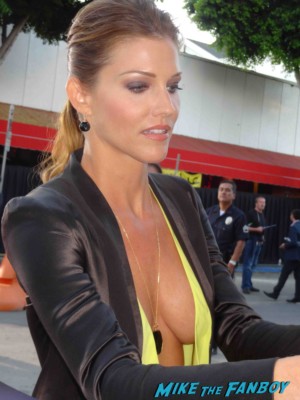 Of course I try and take a picture with her, and of course FAIL!
(there is either a picture here, or Mike is going to add it to my
collection of Photo Fails)
 

Bokeem Woodbine is next and comes right over to us. He signs away! 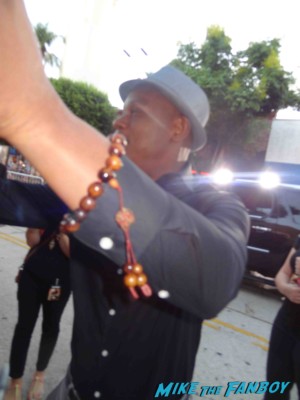 Jordi Molla is next to arrive. He starts on the other side and is
taking forever. I’m hoping they don’t stop him, but he finally makes
his way to us. He starts off by signing my board…….um, would you
mind signing the picture? Thanks. 🙂
  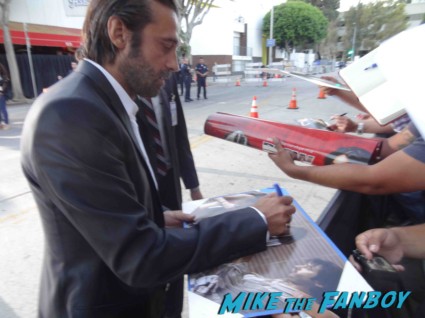 We’re running out of cast members. Nolan Gerard Funk is next to
arrive. He follows suit and comes over and signs.
  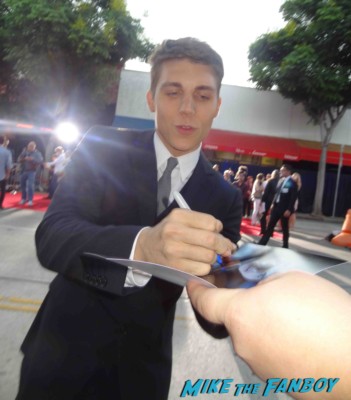 Finally the big man arrives. It takes him a minute to get out of the
car, but once he does, it gets crazy! It’s Vin-sanity! It’s a wave of
people as he goes down the line. It almost looks like he’s going to
skip my section when he reaches out and grabs my photo. 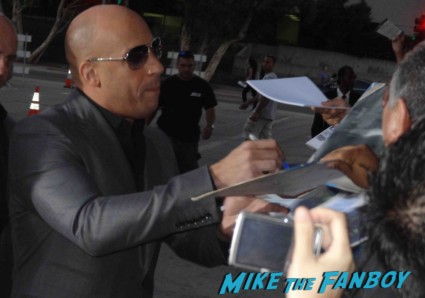 He even noticed that Michelle had signed it and signed it in the light area.
Kinda surprising for how fast he’s moving. I stick out my movie
poster. He even grabbed it, but for some reason he didn’t sign it. Now
I could have moved and easily gotten him on it, but I really am not to
worried about it. Vin works the whole line.
   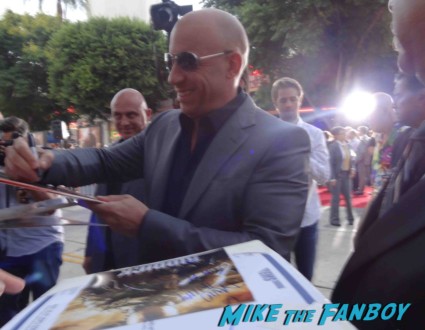 While Vin is still going crazy, Gal Gatot from the Fast movies shows
up. She comes over to our spots and signs a few pictures. My dumb ass
forgot I had pictures in my folder. Oh well, I still get a picture
with her that I didn’t get at the Fast 6 Premiere.
  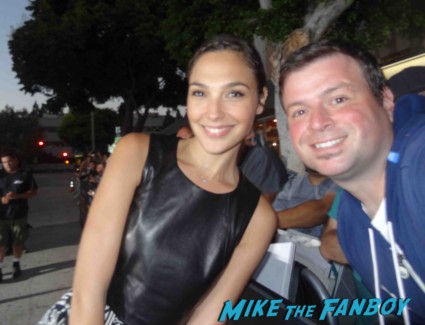 Katie Sackhoff ends up showing up way late. She apologizes to the
crowd and says she’ll do it after.

Well all-in-all, for the amount of time I put into this Premiere, I
would say it went just fine. A few surprises, and I got what I wanted
signed. And I got home in time to see last call. YAY ME!