Home / Ace • Fanboying! • RIP / RIP Mr. Ray Harryhausen! The Man Who Brought All Our Childhood Fantasies To Life And Changed Movies Forever! You Will Be Missed!

Today we lost one of the film greats. Perhaps you heard but Mr. Ray Harryhausen has passed away. Ray was a pioneer in stop motion animation and I think it’s safe to say that he changed the way films look and the way special effects are done.

One film Ray Harryhausen worked on and one that he said was the biggest was the original Clash of the Titans. This was one of my favorite films growing up and I distinctly remember going to the theater with my dad and my friend Shaun to see it. It was mesmerizing.

I met Mr. Ray Harryhausen at Comic Con many many years ago and he and Ray Bradbury did a signing after their panel. The line was huge and I had my original Clash of the Titans daybill. One of the voluneers was just nasty to people, she mocked the fans in line and laughed at people saying, “You’re not getting in!” and “Don’t even take out your stuff! It’s impossible!” “Why are you bothering to stand in line, get out!” Another volunteer saw what was going on and took pity on a few of us waiting.

She got the 10 of us who were being ridiculed into Ray Harryhausen’s line before he left. Ray was so nice and cordial. He asked me where I got the poster and I told him it was a gift from my father.

He was very impressed and I have treasured meeting him and Ray Bradbury.

Ace has written up a nice article about Ray Harryhausen. Check it out after the jump!

Ray Harryhausen you will be missed!

What’s up autograph fanatics! Ace here to report some sad news! Today, we lost a wonderful asset to the TTM community.

Ray Harryhausen, Master Of Stop-Motion Animation and Hollywood effects wizard/pioneer, died today at the age of 92.

He created a brand of stop-motion model animation known as “Dynamation.”

His works include the animation on Mighty Joe Young (Academy Award for special effects); The 7th Voyage of Sinbad, his first color film; and Jason and the Argonauts, featuring a famous sword fight against seven skeleton warriors. PLUS, who could forget Clash of the Titans with the infamous Medusa head.

During the turn of 2013, Harryhausen could not sign anymore fanmail due to his age. Fortunately, back in 2011, I sent a letter to the legend with a few photos! I am proud to say, I got him back within a matter of 9 days. 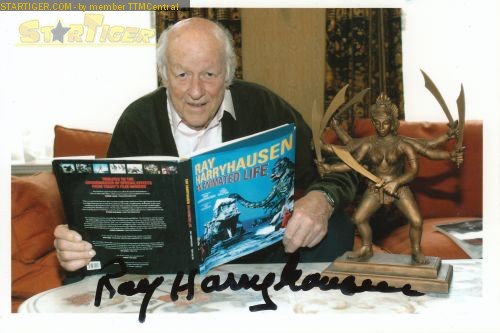 I am happy to have him in my collection. Harryhausen graced film with his talent, and thanks to him, we have the advancement of animation that bestows itself to us today. 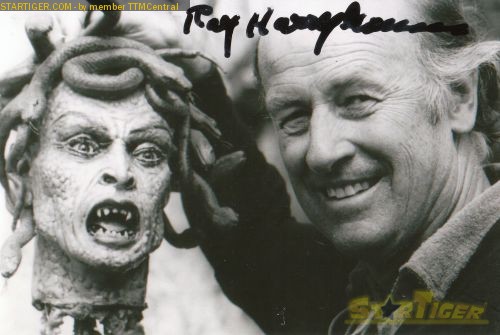 I thank him and his family for his work, life, as well as his appreciation to his fans. Everyone at MiketheFanboy.com sends their regards to his family. Rest in Peace Mr. Harryhausen. 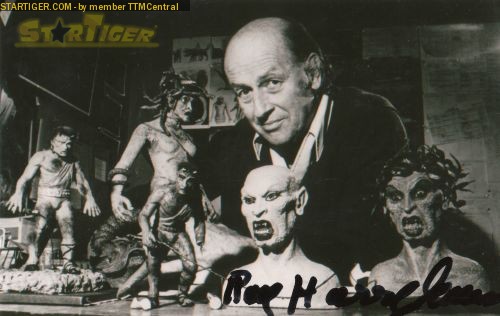