I was thinking of what to do for TT this week and I think the Avengers are taking over everyone’s brains.

This was such a fun day and Robert Downey Jr. Was great to everyone!

Check out this Throwback below!

It was a long day, such a long day that my camera battery died! Doh! What can you do? So, I’m sorry for the shitty pictures. Double Doh!

I heard a rumor that none other than Iron Man himself was doing a rare q and a tonight for his film, The Judge. Now, you just never know about these things, and how many people show up.

It is Iron Man after all.

Robert Duvall was also supposed to be there. Sadly, I didn’t have anything for him. Pinky was also on her way and so was Scotty.

I didn’t now how busy it was going to be, but you just never know right? You have to try.

There were already about 10 people there when I got there, and I was sensing this wasn’t going to happen. Now, Once the others arrived, I had less hope. More and more people were coming.

I spot Ace sauntering over in his dashing Navy Blue hoodie, and then I knew.. This wasn’t really a secret. Now, here where the night gets interesting.

I only see this on rare occasions, It’s like when cats and dogs are playing together… collectors.. behaved themselves. Stop, I know. But it can happen.

I’m not sure who had the idea to line up, but everyone agreed, and we did it. Then the line did an odd loop, and it didn’t really work out that well, but we were calm.

A car pulls up and just sits there. No one gets out, no one says anything, and we wait… Staring at the car… and we wait… and we wait… A bead of sweat forms on Ace’s forehead. I clutched my Iron Man 3 litho, because I needed it in silver or gold. Oh, the drama!

Then and again, I’m not sure who had the idea, but we should make a straight line. And shockingly, everyone agreed! So, we formed a single file straight line. Low and behold there wasn’t anyone in that car. Who knew!?!

Robert Downey Jr.’s security came over and said, as long as everyone’s calm, he’ll probably do it. But he needs to get Robert’s wife inside since she’s pregnant.

We all were like, yes, no worries, we want to work with you. etc…

here’s where it gets crazy. Everyone actually did. Robert Duvall arrived and was super nice. 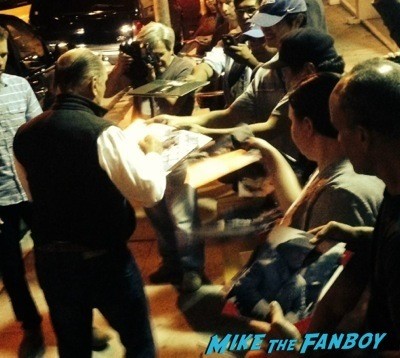 The line moved because Robert started in the middle, but Robert’s publicist said to go to the end. Robert signed for everyone. Amazing right? Super cool. 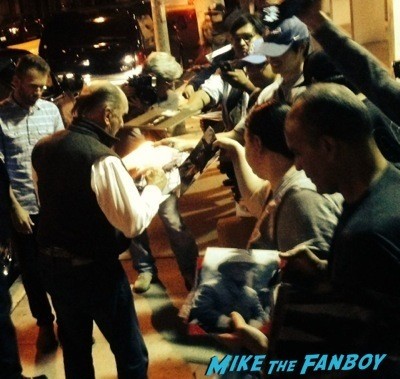 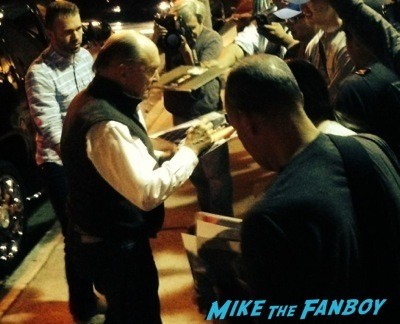 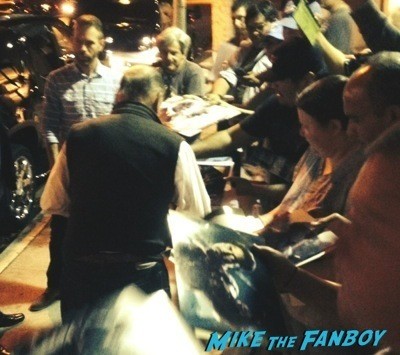 Then we waited for Tony Stark, I mean Robert Downey Jr.

Everyone got BACK IN LINE! I was stunned. It was orderly. Time was getting short, so I hoped that he would do it.

Robert Downey Jr. pulled up, his wife got out and inside and then Robert got out. He was told about the q and a and then said, “Sure, I’m just going to do this real quick.” and then looked up and said, “Wow, that’s a lot of people! I’m going to do one each guys.” 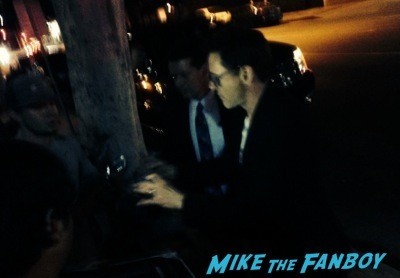 Sure enough, he went down the line, I really wanted him in gold on this awesome Iron Man 3 litho. It’s the IMAX poster, and I just knew it would be super hard to get signed any other time. It’s literally black. Scotty and I both wanted gold and when Scotty asked him to switch, he said, “I’d love to switch to gold!” So nice. 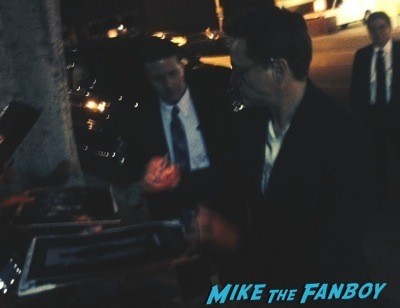 Pinky was next, after me, and asked for a photo. Here’s where it’s sad face time because Robert said he didn’t have time for photos. Doh. Sorry love. ;(

But you know, it’s a great lesson, because if everyone was all crazy this wouldn’t have worked out. Everyone was calm, it was orderly and we all (almost) walked away with something! It was pretty epic, I mean… He’s freakin’ Iron Man! 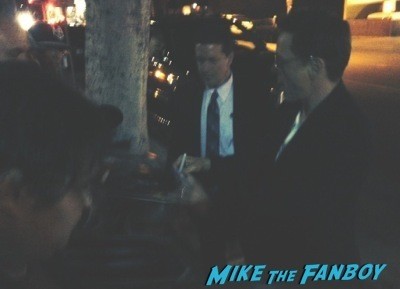 I don’t think I’ll ever not get star struck when meeting Robert Downey Jr.

So cool of him. So so cool. 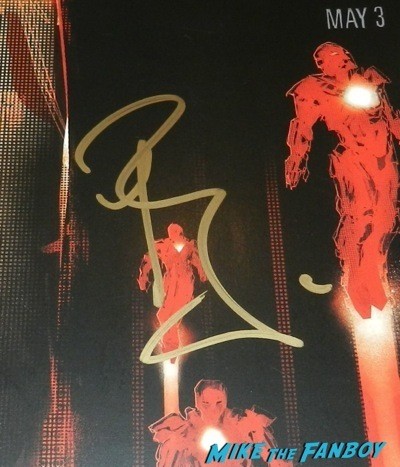 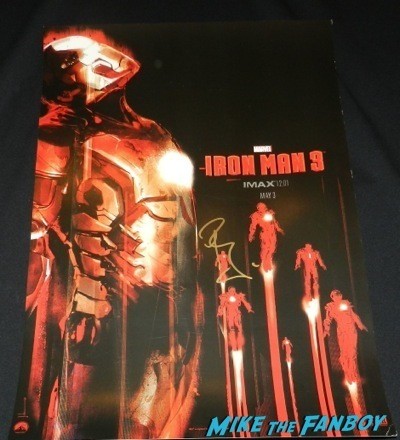