I know when you say the name Robert Downey Jr. people immediately think of a little film called Iron Man. What? Crazy right? I know!

However, there was a time that Robert Downey Jr. made his mark in small quirky indie films such as Chaplin, Heart and Souls, Chances Are, Less Than Zero and more.

For this weeks Cult Classic Corner Jack is talking about his love of Chaplin, the man and the movie!

I remember my first time. The year was 1992 when the words and images of Charlie Chaplin first entered my life. Thanks to a critically acclaimed film, “Chaplin,” this great comedian soon became one of my idols and comedic inspirations. 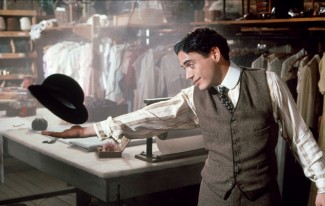 Honestly, I can’t think of one film, short or feature length, that wasn’t entertaining. Charlie Chaplin was always at the forefront and one of Hollywood’s greatest superstars. Unlike some A-listers today, Charlie literally did EVERYTHING. And by everything I literally mean everything: acting, directing, editing, producing, songwriting and writing his own films. He was essentially a “one man” film crew and I’m eternally grateful for his contributions. 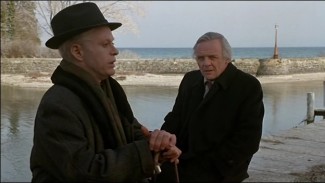 “Chaplin” stars Robert Downey Jr. in the titular role and brings the larger than life Charlie Chaplin to live in this mesmerizing movie. Directed by Academy Award winner Sir Richard Attenborough, “Chaplin” captivates the exciting and enthusiastic times of early filmmaking and the bygone era of Hollywood. The film takes a glimpse at “The Tramps’s” life as an older Chaplin reflects to his biographer (played by Anthony Hopkins) about his poverty stricken childhood in England to his scandalous affairs throughout the years. Regardless of your socioeconomic background, everyone loved Chaplin, well maybe except J. Edgar Hoover. 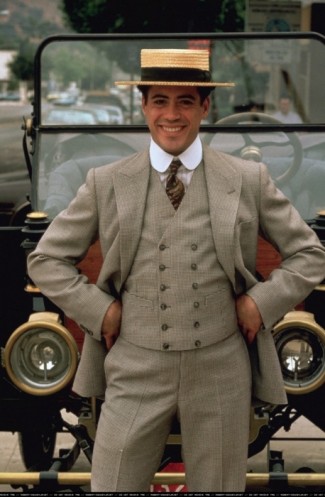 Not only is the film a stunning depiction about a Hollywood icon, but an exhilarating ensemble film filled with so many “who’s who” you will start to lose track. Even now when I watch this film I get goose bumps seeing so many familiar faces in small, yet pivotal roles, including some before they even made it big like David Duchovny and Milla Jovovich. Needless to say, this film persists as one of my all time favorites and my absolute favorite Robert Downey Jr. film. 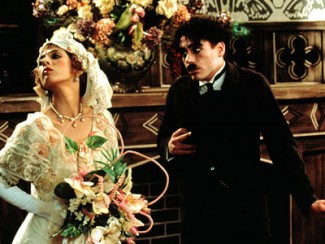 Recently, Robert Downey Jr. was scheduled to appear on a talk show, but instead Mel Brooks attended as his replacement switching their schedules from Thursday to the following Tuesday. Thanks to a heads up by Mike I changed my plans and prepared for Robert’s appearance the following Tuesday. I arrived as usual and met up with some of the MTF Family including Billy Beer and the lovely Erica, whom I met for the very first time. We were all excited at the possibility of meeting Simon Pegg and Robert Downey Jr., but most had great expectations for Simon. We thought Robert “might do it,” but could be in great spirits considering “Iron Man 3” was #1 at the box office. However, as some of you regular readers know, we were all disappointed by Simon, but I digress.

While Erica and I are discussing meeting celebs at theaters (especially on Broadway) we get word one of the guests just arrived so we should get ready. Sure enough, it’s Robert Downey Jr. Everyone enthusiastically calls him over and to our surprise, he comes over in his red shirt and sweatpants signing down the line. 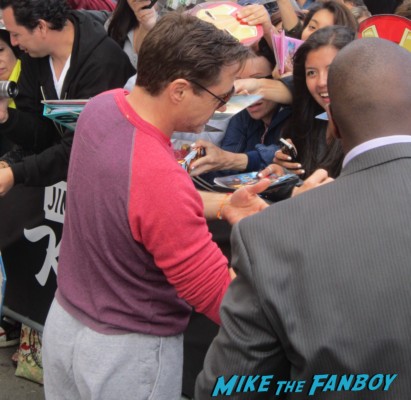 In one case, someone actually got a “real full signature” rather than his normal “hump”. This can’t be happening! 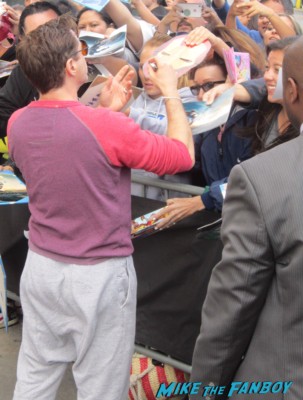 As he is making his way down I enthusiastically hold out my old Rolling Stone magazine from 2008 and my “Chaplin” Laserdisc. Honestly, I was so overwhelmed and speechless I couldn’t believe this was happening. I honestly never thought in a million years this would be a possibility. Sure enough when Robert arrived at me, he gave me two great big signatures and called me “Old School,” something Erica informed told me after Robert left. He continued signing and signing giving great autographs to everyone there with a huge smile on his face. After about five minutes or so, he headed to the taping and we prepared for Simon Pegg’s arrival. 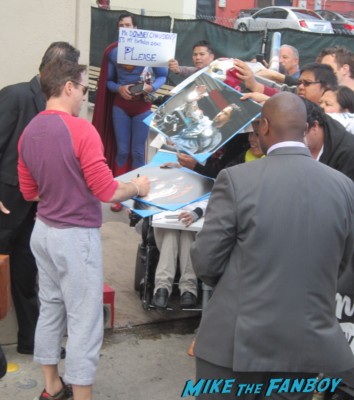 Not that long afterwards Pinky and Keith stopped by to say hello, just narrowly missing Robert Downey Jr. As we’re talking, one of the paps stops by and informs us Simon Pegg arrived when Robert was signing and headed straight inside since “no one called out for him.” Honestly, the fact I walked away with two Robert Downey Jr. autographs blows my mind so I was completely content. Still, I felt bad for Mike 🙁 who arrived later and got nothing. 🙁 🙁 🙁 🙁

(Editor’s Note: Thanks for reminding me of that painful-ness! Yay for me! Don’t sugar coat THAT one!!! M-) 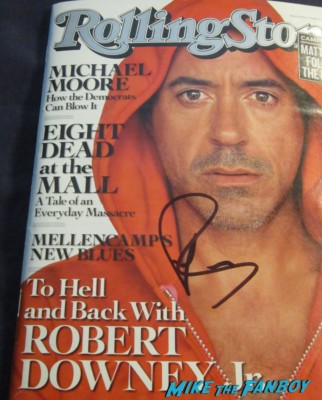 When Simon left straight for his car, we were all shocked since “he’s the nice one.” However, that’s this hobby sometimes. You honestly never know what could happen. Until the next time, happy autograph hunting! 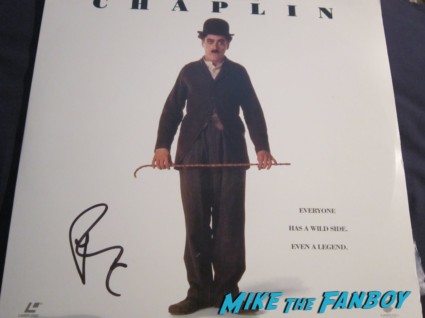