Home / Movie Reviews • Reviews / RoboCop (2014) Blu-Ray Review! How Does The Remake Stack Up Against The Original?

I’d buy that for a dollar!

Any fan of 1980s films knows that famous line. When MGM announced that they were remaking Robocop a collective gasp ran though the fanboy world. How could they touch the original camp classic? The film that set a generation of fanboys into a tizzy? How? HOW!?

For me, while I love the original Robocop and it will always have a place in my heart, I have one thing to say, Robocop 3. Bam! The premise of the original was always interesting and without laying waste to the original, I felt like, if they were going to do a remake, I would mind seeing an updated version of the film.

Omnicorp, has made millions of dollars… Okay billions of dollars selling their robo-machines to the armed forces overseas. They are the perfect killing machines and are there to “foster peace” with the people. However, the biggest market for these machines is right here in the United States. But Omnicorp can’t sell their machines here in the United States due to a bill called the Dreyfus Act. It prevents any machine from participating in law enforcement. 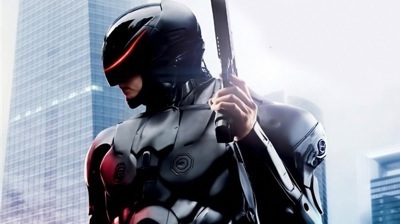 The Omnicorp marketing people have tried spinning the law, working around it, but they couldn’t come up with a loophole. Until a small project that Dr. Dennett Norton (Gary Oldman) was working on sparks an interest. Norton was creating artificial arms for amputee victims with some success. The thinking being that if a man was inside the cyborg it wouldn’t be a machine. 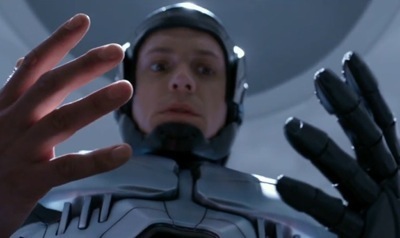 After cycling through candidate after candidate detective Alex Murphy (Joel Kinnaman) got the nod. He was the victim of a car bombing that almost killed him, instead he lost most of his body, an arm, a leg, let’s just say, it’s not pretty.

Murphy’s wife Clara (Abbie Cornish) signed off on the project hoping that it will help her husband. Murphy also has a small son, David (John Paul Ruttan). Murphy wakes up and doesn’t understand what has become of him. He remembers his previous life (A change from the earlier version of Robocop) and what happened to him. In essence his mind is always Alex Murphy. 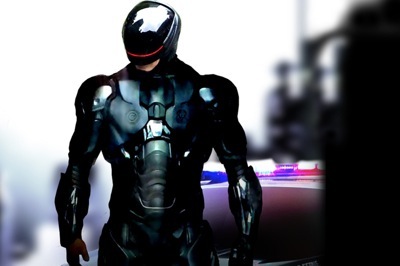 Immediately, the public loves him, but since he’s a human he can’t be controlled, his thought process is slower than that of his machine counterparts, so Norton takes away his cognitive thought, in essence removing Murphy’s free will. He ignores his family and is a shell of a man.

I think it’s an interesting take on the story, basically it asks the question, what makes a man, truly a man. Is it his mind, his body or both? In reality Murphy has no body, only his lungs and brain, so the machine is what keeps him alive and ticking, even though his brain remembers everything he once did. 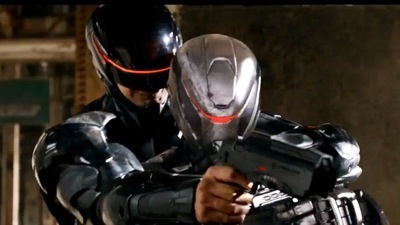 The action sequences are well done, and you can see how much money they put into the film, it’s nice to see a bigger budget adaptation. Joel Kinnaman is a fine Alex Murphy, his tall lean stature works for him and he makes a much sleeker figure than Peter Weller did. While the role of Murphy’s family is beefed up in this version, I still felt like the dynamic with Nancy Allen was missed here. Murphy still has a loyal partner, but they scenes were too few to really make an impact. The make and female relationship of the original added a great dynamic in the original and I missed seeing that here.

There’ s a lot to like in this version however, and I found myself enjoying it way more than I thought I would. While I don’t think it’s going to earn a place in my heart like the original does, it was an enjoyable film, with some great action set pieces. 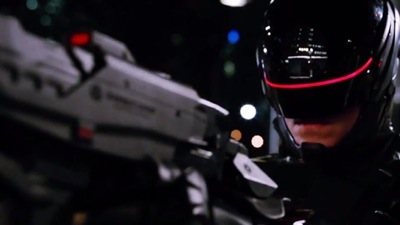 Robocop is being released in an awesome blu-ray transfer. The picture quality is superb and like most recent releases really pops on high definition. It’s a pristine transfer and the details really look superb. This is especially true in the larger action set pieces. Sometimes even in high definition transfers the high intensity action can get a bit muddled, but not here. It really is a fine transfer.

I was hoping for more special features on this release, it’s not bad but I can’t help but think that there was more footage somewhere. Included are about five deleted scenes, some Omnicorp product announcements (Which are fun to watch), a series of three featurettes titles RoboCop: Engineered for the 21st Century, and two theatrical trailers. 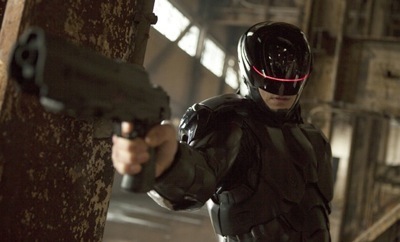 Overall, I know fans of the original are going to have issue with anything that touches their cult classic, but in all honesty this version of RoboCop isn’t bad when you give it a chance. It’s a different film, with different themes and it works. It’s a fun action film that I think fans of the genre will enjoy! I say check it out!

RoboCop is out now on Blu-ray! 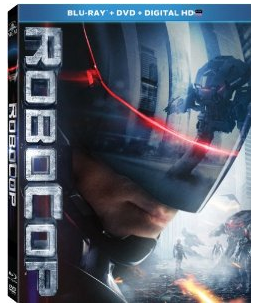