What’s up autograph fanatics! Ace here with a recap for an Evening with the cast of Robocop!

Nancy Allen put this event together for a Cancer charity close to her heart… Sadly, I regret not bringing my other film “mini-posters” because this event was awesome. Not only that, but I had neat movie figures and oversea film editions that were crying out for a signature.

We got to the event around noon as the entire audience had already gone in the hour before. Of course, the usual gang was in attendance. DVD Dave arrived around five minutes before we got there. Wheels showed up at the same time, and Big Mike showed up later with his Robocop figures. Mr. C and I staked it out on both ends with the rest of the guys.

We assumed that the Robocop guests would not arrive until later in the afternoon. With the exception of Nancy Allen, who arrived early morning in order to set up, all the other guests arrived after we got there. They could either park in the front or park in the back… either way you had to be smart enough to spot them.

Michael Miner was the first that we saw to drive in… Immediately the security guard held his position in his seat… Realized someone wanted to pull in… When we told him who he was, he acted as though we were doing his job for him. He let Mr. Miner in and immediately we called for Michael to sign a few things. He signed and signed away… 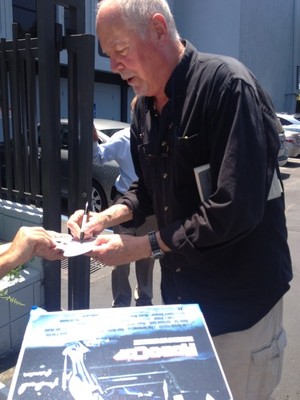 Paul McCrane was the second person we saw. We called for him immediately as he was going back to get something out of his car. The first thing I pulled out was my Shawshank Redemption DVD cover and added a sig on that. I moved on to the Robocop pieces. He was pretty cool… He was surprised we asked him to sign Shawshank as well. 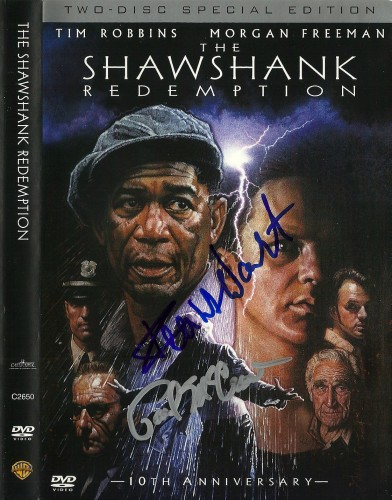 During the next thirty minutes or so, everything slowed down… I started fidgeting back and forth, up and down the block. During this time, Peter Weller walks up the sidewalk and right past them… I silently kept pointing, “THAT’S HIM!” He immediately said, “I can’t do it now guys, in a minute.” HAH! You know what a Hollywood minute is? Never coming back… Oh Well…

It was only time before hours passed. Our only hope was to get them as they exited the event. Mr. C snuck in and decided to pay for three Peter Wellers to complete his cast piece. He would be the only one to get Peter as the Hollywood minute came to fruition.

As the event ended, all the audience came out, and within a short period of time, so did the guests. It was probably the only event where SEM was pretty cool with us. Everything was laid back and calm.

Jesse D. Goins was the first to come over and sign. He was ecstatic that we asked him and he signed everything you placed in front of him. He was really humble and gave us a minute of time as Mr. C talked his ear off.

Felton Perry came right after. He signed and signed away as everyone just got into the groove to come over. 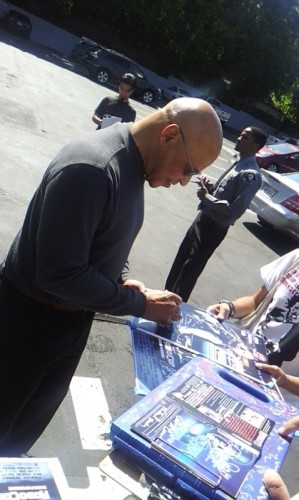 Paul Verhoeven! Probably the biggest mistake I made in prep! I left all my photos at home. He directed films such as Total Recall, Starship Troopers, Basic Instinct, Hallow Man, Show Girls, and the list goes on… He was hypernice… He signed anything you had. Not to mention, after he was done signing, DVD Dave needed him on one more DVD, so he walked all the way back to sign more. 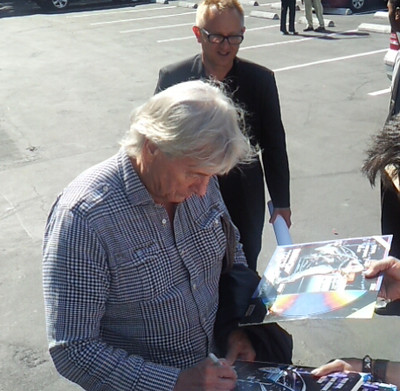 Edward Neumeier was right behind Paul Verhoeven as he was signing. Ed walked away, got in his car and we called Ed over. He drove back, got out of his car, and signed away. He even gave us a signed business card. 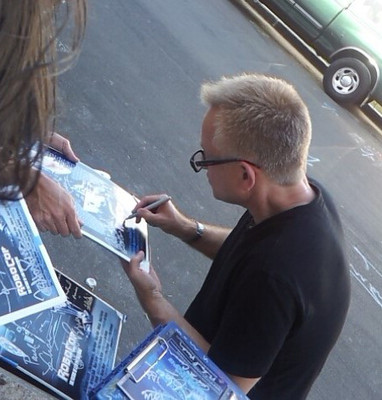 Peter Weller jetted the back way as we were getting Paul and the rest of the cast… Nancy Allen was the last one… The SEM event security told us she was still in the venue so we knew for sure that we had a chance. Thirty minutes passed and event volunteers came out to tell us that Nancy Allen left… We were like… “Really?” One female volunteer said, “Yeah, she left, I have no reason to lie!” Right away, we said… “Oh, Well, her car is right there! Now, we understand you wouldn’t “lie” but, we know she is in there.”

Sure enough, Nancy Allen walked out ten minutes later… We called and she waved! She, of course, was trying to avoid us… The lying volunteers were only evidence of that. Our only hope was that she would sign in car. She drove by us, we held up our posters, and she rolled down. She would only sign if she personalized, and I was totally cool with that. I only wish that I had brought Blow Out or Carrie… It was cool to get her regardless… 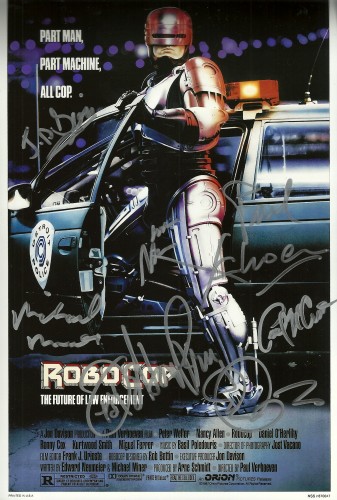 Overall, despite not getting Peter, the event was AWESOME!