There’s nothing like Star Wars to ignite a fandom. Just putting the words, Star Wars in front of any title can guarantee any film a huge box office opening (see episodes one through three). Once Disney took over the Star Wars universe and promised fans new films based on the franchise including stand alone movies, the fandom was reignited. The first film in the Star Wars stand alone saga is Rogue One: A Star Wars Story. 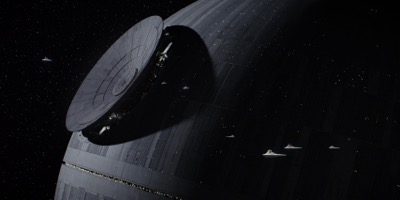 Rogue One: A Star Wars Story is out now on Blu-ray and I’m happy to report that the film not only fits squarely in Star Wars cannon, it also fits perfectly for home viewing. This Star Wars story revolves around Jyn Erso (Felicity Jones), she is the daughter of an engineer named Galen Erso (Mads Mikkelsen). Galen has been taken by the Imperials and has been forced to build the new Death Star, leaving Jyn to hide and eventually be rescued by Saw Gerrera (an over the top Forest Whitaker). 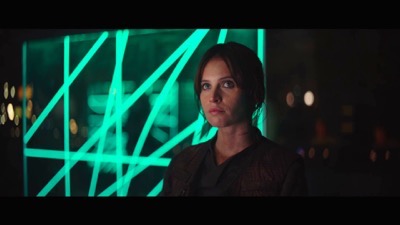 Now all grown up and in a bit of trouble Jyn is rescued from Imperial forces by a rebel band led by Cassian Andor (Diego Luna). She is then recruited to participate in a mission to find Saw Gerrera who has since gone underground. She is tasked with finding the base where the plans of the Death Star are and getting those plans to the rebels so that they can destroy it.

Part of her team includes a pilot (Riz Ahmed), a reprogrammed Imperial droid (voiced by Alan Tudyk) and a few other scrappy Rebels they pick up along the way. The plot isn’t overly complicated but emotionally effective as Galen has built the Death Star with a flaw so that anyone who looks hard enough at the plans (except the Imperials apparently) can find the find the weakness and exploit it.

Shockingly gritty for a Star Wars film, Rogue One really hits all the right notes. There’s plenty of action to go along and the pace moves along nicely. In fact, watching the film again at home, I enjoyed it more than I did during the theatrical run. This journey fits perfectly with home viewing and I think will be treasured by generations of young men and women. It’s also nice that this Star Wars story has a female lead who isn’t prone to falling in love or having an overt romanic angle. Jyn has a mission and she accomplishes it, there may be a little flirting but she does it without having to fall prey to the standard romantic cliche. 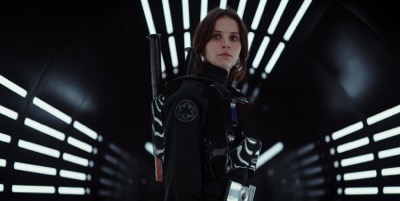 It’s also nice that since everyone who has seen Star Wars: A New Hope can attest, this is a story we al know the ending to. It’s been in the original film since 1977 and hard to miss. I was actually very glad to have it fleshed out, and while I admit to being skeptical of the Star Wars stand alone films, at least in this instance it’s very well deserved.

Rogue One: A Star Wars Story arrives on Blu-ray thanks to Disney and the transfer is pristine. The film was shot digitally and you can see every detail. Nothing has gone unnoticed, one can see the fine detail in the fibers of the clothes, the fit of the fabric and every detail on the consoles. It’s really incredible. The close up details are exquisite and I wondered why I liked this version more and it might have something to do with the home video picture quality allowing me to see some of the fine details I might have missed on the big screen. 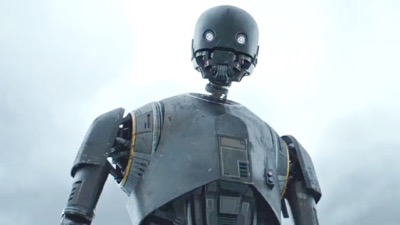 Special features on this release are on a separate disc and include:

• A Rogue Idea (1080p, 9:00): This is a nice short featurette detailing the preproduction on the film, hiring of the director and more.

• Cassian: The Spy (1080p, 4:14): The second of the character featurettes, this one focuses on Diego Luna and bringing his character to the screen.

• Baze & Chirrut: Guardians of the Whills (1080p, 6:20): This featurette focuses on the mentioned two characters.

• Bodhi & Saw: The Pilot & The Revolutionary (1080p, 8:35): The final character piece starts with Riz Ahmed’s audition and talking about both characters.

• Visions of Hope: The Look of Rogue One (1080p, 8:24): This really focuses on the visual style of the film that’s similar to the past movies but unique at the same time.

• The Princess & The Governor (1080p, 5:49): This featurette looks are recreating two characters from the original Star Wars movie and what it took to get them to the screen.

• Rogue Connections (1080p, 4:31): This points out some Easter Eggs in the movie and connective pieces as well.

Overall, I have to say that Rogue One: A Star Wars Story is a great movie. I thought on second viewing that my original opinion might change but this film really is excellent. The cast is top notch and it’s enough to satisfy hand core Star Wars fans and casual fans alike. I highly recommend adding it to your collection!

Rogue One: A Star Wars Story is out now on Blu-ray!