Home / Conventions • Jeremy Monlux / Rose City Comic Con Recap! Jeremy Talks With Shannon Elizabeth About Autographs! Checks Out The Cosplay! And Has A Blast At The Con!

It’s not often that you have Captain America, Darth Vader, Poison Ivy, 5 Freddy Krugers (and Robert Englund), a singing puppeteer, and every conceivable version of Spiderman under one roof. Welcome to the annual Rose City Comic Con in Portland, Oregon. Held over the weekend of September 13, 2019, Rose City Comic Con (RCCC) as I found out is something different for every character who walks, wheels, skips or dances through the doors.

Pulling up to the Oregon Convention Center where the con is held, I could feel my excitement starting to grow. I attend every year as a guest, but this was my first time attending as a writer covering the con. Press pass in hand, I entered and immediately headed for the celebrity area to get a closer look. To my left was Lou Ferrigno from the 1970’s TV show, “The Incredible Hulk” . To my right, a huge line of fans waited to meet Zachary Levi who most recently played the title character in “Shazam”. In between them were stars of every age and every genre. Some I did not recognize; others were unmistakable like Paulie Shore, Elizabeth Berkley and one of my favorites, Shannon Elizabeth.

At RCCC (and most con’s) attendees have the opportunity to meet their favorite celebrities, get an autograph, or maybe a photo- all for a fee. For many celebs, a con is the only way to get an autograph from them. Quick side note: Collecting autographs is my #1 hobby- (#2 is detailing my car..another story for another time) each piece in my collection comes from someone I am a true fan of. I was lucky this year at RCCC because several stars I am a fan of were in attendance. One of those was actress Shannon Elizabeth, known for her scene stealing turn in “American Pie”, “13 Ghosts”, and most recently playing herself in the first US version of “Big Brother”. She was INCREDIBLE on the show but when I brought it up during our interview she sighed, took a deep breath, and laughingly said, “let’s not go there”. I wanted to press her for details but our interview was specific to autograph collecting. 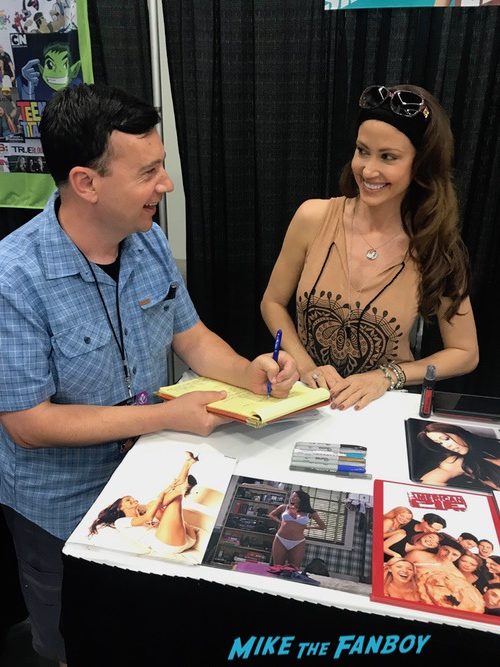 As an autograph collector, I’ve often wondered what it must be like to be on the other end as the one signing, the one being besieged with flashing cameras – all the while smiling and acting as if it was normal to be surrounded by adoring fans screaming your name. According to Ms. Elizabeth, it was a surreal moment:

“The first time I got asked [for an autograph] was at the premiere of “American Pie”. I remember the limo drove us [cast members] right up to the front of the venue and people starting asking for my autograph”. She then smiled clearly remembering that moment and softly said, “It was so cool”.

Even from the beginning of her career, Shannon insisted (and still does) that every photo is personalized. While her appreciation for her fans was evident, the same cannot be said for those that attempt to profit from celebrity autographs. And when our interview was briefly interrupted by a fan who wanted Shannon’s signature on a photo- she asked for the spelling of their name.

“Why” asked the fan?

“Because” smiled Elizabeth. “I personalize everything”

Today, Shannon calls South Africa home where she is a HUGE advocate for animal conservation. Although she is more of a fan of a selfie or photo because “it’s a more beautiful memory”, she is always happy to meet fans and sign an autograph or two.

Oh, and I also asked her if she has ever had a fan-girl moment with a celebrity. “Yes” she said quickly. “I met Garth Brooks once and started crying”.

What makes a con like RCCC so charming is that everyone is not only welcomed, but appreciated for their individuality. In a world where looking or acting different is met with ridicule and laughter, it’s refreshing to see the opposite true at a con: Instead of being laughed at, the cos players are treated more like a celebrity- getting stopped for photos and given high fives for outstanding costumes.

Eli Piatt has been attending RCCC since 2012- each time sporting a new costume with his trademark beard. Today, he is dressed at Biker Joker- his face painted white with the trademark Joker red smile, his hair (and beard) painted green. When asked why he attends the con, Piatt replied, “I like being here. It’s really easy to find acceptance.” He’s come dressed as characters from “FireFly” and other “DC” characters in the past and he’s hoping to perhaps one day come as the mixtape from “Guardians of the Galaxy”- and yes, he will incorporate his trademark beard! 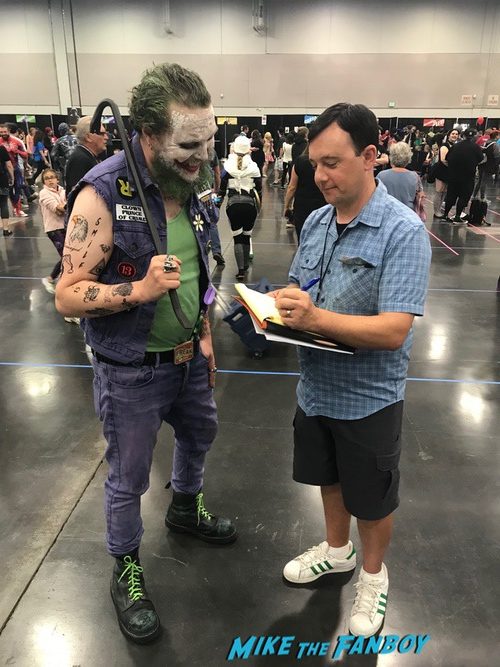 No con is complete without the INSANE selection of collectables, memorabilia, comics, toys, tattoos (yes, tats), food, drink and a billion others. For Lynette Scott, owner of Bricks & Minifigs, a Beaverton, Oregon based lego and toy store, RCCC is more like home. She’s been with the con since its inception in 2012. And while it is profitable, Scott reiterated that “It is not about the money- it’s more about the connections and the amazing people”. 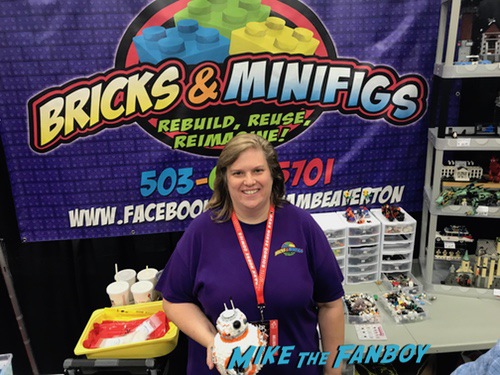 When asked what brings her back year after year, she said, “It [the con] has grown and gets bigger each year , but it’s not as commercialized as other cons out there. I like the friendliness of the people (both attendees and staff) and no two cons are ever the same.”

As my day at RCCC came to a close, I caught up with actor Anthony Michael Hall of “Sixteen Candles”, “The Breakfast Club”, and “Vacation” fame. Although we didn’t have time for a formal interview, he (his assistant actually) took my name and number, promising me an interview when he’s doing press next year for the new “Halloween” film (and yes, it was his idea). 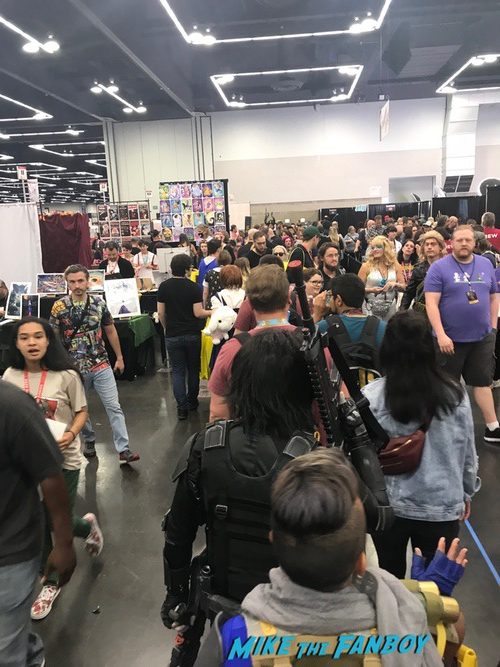 As I left the convention hall- autographs in one hand, and a somewhat spendy (but refillable for free at next years con) oversize metal mug in the other, I reflected on the experience that is Rose City Comic Con. It’s hard to put into words what it is like to be at the con and I think it might be something a little bit different for each of us. More, it is something that needs to be experienced to truly understand what it means. 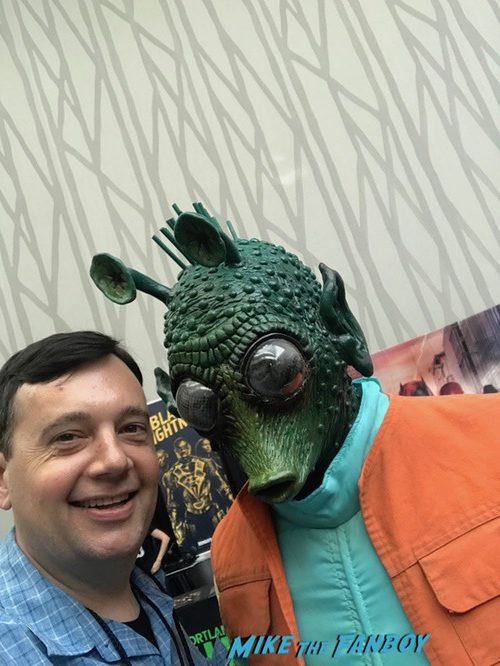 Oh- I almost forgot. After my sensational and groundbreaking (to me anyway) interview with Shannon Elizabeth, I brought out a photo of “Celebrity Big Brother” that had been previously signed by another former CBB cast member- Kato Kaelin. I asked if she would mind signing it for me. She looked at the photo, looked back at me, grabbed the pen, smiled and said, “of course..who should I make it out to?”

Rose City Comic Con. A personal experience, a personalized autograph, and personally, one of the greatest days of the year!