I am starting the recovery process from SDCC and feeling at about 20%. While I get back on track, the luscious Mr. Pinky had a wonderful moment meeting Ms. Ruby Rose.

Now, for those of you who haven’t seen Orange is the New Black, Ruby Rose is the new sensation and Pinky was able to meet her when she did a rare appearance this past week!

Hello, my lovelies. Pinky Lovejoy-Coogan here veering a little out of my normal eighties realm to talk about my latest girl crush, Ruby Rose. Of course, I’m not the only one, as it seems like the entire world has fallen in love with the newest cast member on the amazing Orange is the New Black. 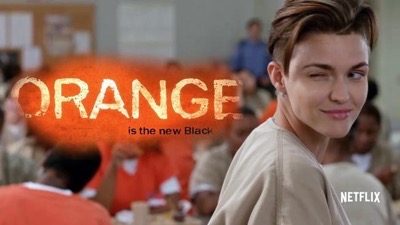 And why wouldn’t they? She’s incredibly beautiful, talented, and great to fans. Oh, and she’s from Australia, so she’s got a sexy accent, as well! Before coming to the U.S. less than two years ago, she was an MTV VJ in Australia and has a short film called, “Break Free” which is incredible – I highly recommend checking it out. Oh, and did I mention she’s a DJ with a residency in Vegas AND she can sing?!?! Love her! 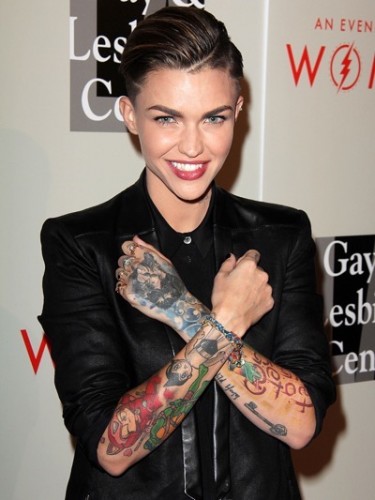 As Ace mentioned the other day, Ruby was on a local talk show last week that we were able to attend. I wasn’t sure how busy it would be with people leaving for Comic Con, but it was the busiest I’ve ever seen. Luckily I’d made a sign and the people on the show made a special place for me to stand where my sign could be best seen. 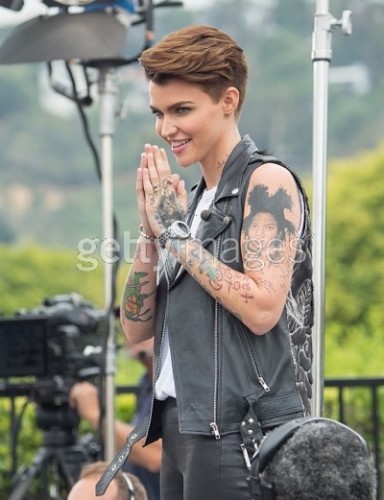 One side of my sign said, “Ruby Rose – Picture please?” And the other side of my sign said, “I heart Ruby Rose.” When she saw it, she gave me a little bow – it was so sweet! When she first arrived, she signed several autographs and did a bunch of pictures, but they skipped her around the giant crowd. After the interview, they brought her back to the places she’d missed, but said she was only doing pictures, no autographs. That was totally fine with me! Wahoo! 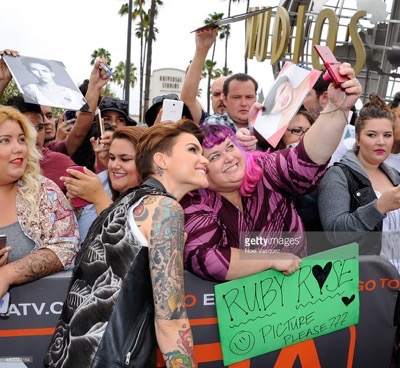 When she got to me, she told me she loved my hair, and I tried not to fangirl out TOO much (but I totally failed). Ruby was so cute to watch – during her interview, she mentioned being confused by the huge crowd and wondered who we were all there to see. She had no idea we were all there for her! I think the most surprising thing was that later the same day I started getting messages from people saying they saw me on Ruby Rose’s Instagram feed. What now? I checked and, sure enough, she’d included our picture in a collage she made of the fans waiting for her (you can also see Ace in the top right corner). 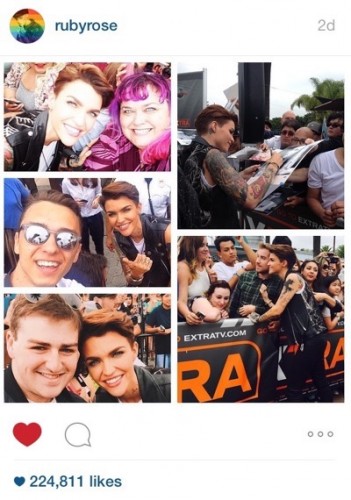 My mind was blown!!! So excited!!! Ruby’s blowing up and I can’t wait to see what she does next. 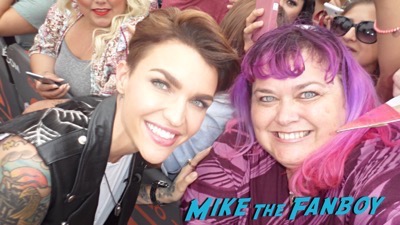