Man, talk about trips! The Lovely Erica, as you might have read from her Hobbit movie premiere report, had an amazing trip to New York! However, The Hobbit wasn’t the only awesome thing she got to do. Erica also went to one of Russell Crowe’s Indoor Garden Party concerts.

This was a special concert however, because Les Miserables was opening soon and because Hugh Jackman was in town he joined Russell Crowe onstage. Let’s just say it was pretty amazing!

Strangely enough, I made 2 trips to NY this year and both were timed with Russell Crowe’s Indoor Garden Party concerts. I think it’s a sign and, sure enough, I get tickets this time and am joined by Big Apple Elisa and my sister Linda.

Like last time, there are a bunch of pros waiting around before the show.  And like last time, Samantha arrives early and Russell arrives later.  Samantha is as nice as before, but a lot has happened in the past few months – she’s personalizing now and she’s lost letters.  I don’t have anything new for her to sign, but I do get a great picture. 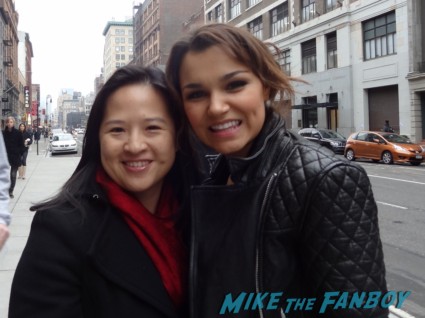 Russell is mobbed and signs for all.  He is running late so he doesn’t stop for pictures this time, but I’m happy that my Master and Commander poster is finally signed! 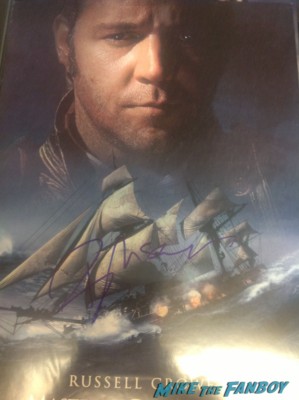 Just before our show begins, I see a tall figure head towards the front door.  Ah!  It’s Hugh Jackman!!!  Russell tends to have special guests who join him on stage.  Last time it was Sting.  This time, we thought that some additional Les Miserable cast members may join in and here is Jean Valjean himself!

Hugh gets inside before we can stop him and we aren’t about to bother him in the full light of the lobby where everyone is trying not to watch Hugh, but we are all watching him out of the corner of our eyes.  Eventually security realizes they should move him to a private place and he heads backstage.

The previous show is running late so pretty soon the lobby is packed with folks.  We see Jason Gray-Stanford who played Lt. Disher on Monk. He is very nice and Elisa gets a photo with him. 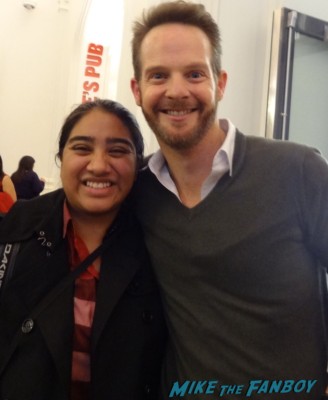 The doors open and we’re packed like sardines into Joe’s Pub.  As we figure out how to breathe in such close quarters, I see Hugh walk pass us to get to his seats.  We’re not the only ones as there is a large group of Hugh fans who bought tickets to both Indoor Garden Party shows in case Hugh showed up.  When they see Hugh walk by, they get up and chase him down.  Grrr! Manners!

They follow him around the room and crowd around his table and, in fact, Hugh ignores them as he’s trying to have a relaxing night with his wife and friends.  The rabid fans eventually leave and head to their seats, but will instead talk throughout the whole performance.  Ugh!

You would think they could relax and enjoy the concert which is a lot of fun. I associate Russell Crowe with very serious roles so it’s great to see him so relaxed and smiling.  He is clearly having a lot of fun and is very into the music. 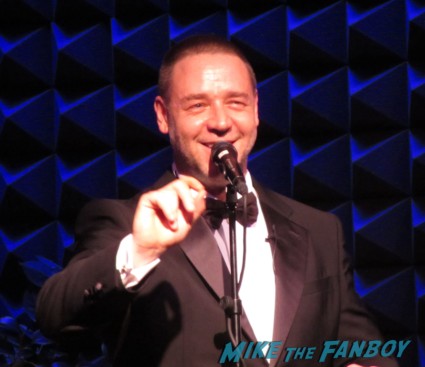 He is joined on stage by several guests.  In addition to Samantha Barks, the group includes members of his merry men from Robin Hood – Kevin Durand (who is very free and goofy on stage – nothing like his serious bad buys in Wolverine or Real Steel), 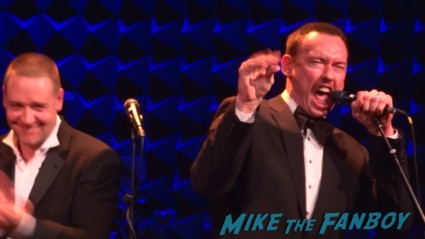 Scott Grimes (a fine singer with a great voice) and Alan Doyle (Russell’s co-creator for much of the music).

The set list is pretty folksy in nature with an Adele song (Samantha singing “Don’t you remember”) and even a nod towards One Direction since one of their producers, Carl Folk, is playing with the group. 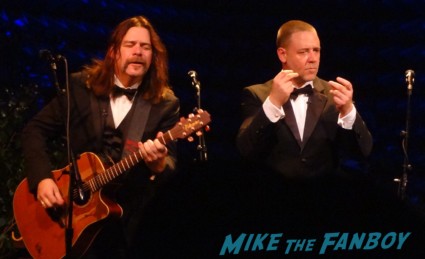 When the main song set is over, Russell brings “24601” (Hugh) onstage to sing.  He dresses Hugh in a tuxedo jacket and I must say, Hugh is looking really good in jeans and the tux jacket.  Really good… 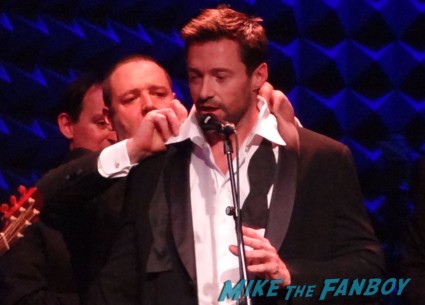 Hugh sings Joe Cocker’s “The Letter” with great zest.  For Hugh, being on stage is as natural as breathing (hence the Tonys and Emmy…). It’s always fun to see him on stage and it’s adorable that he’s singing to his wife. 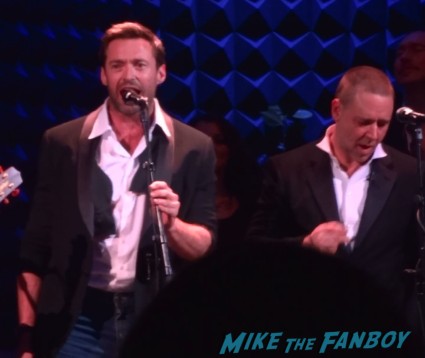 After he finishes, Russell starts to sing “Valjean, at last! We see each other plain…”

Yes, they are about to sing “Confrontation” from Les Miserables.  Whoa!

I can’t quite process the moment as the two of them go all out on this song (in between winking and giggling with each other).

It’s a study in contrasts as Hugh is acting and performing while Russell is singing (very internally focused).  This contrast in their styles is so fun to watch as Rusty and Hughie go at it with full voices. 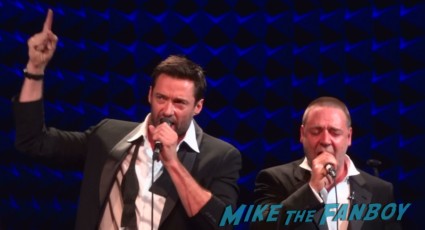 They are clearly enjoying the moment and hug no less than three times afterwards.  Wow! 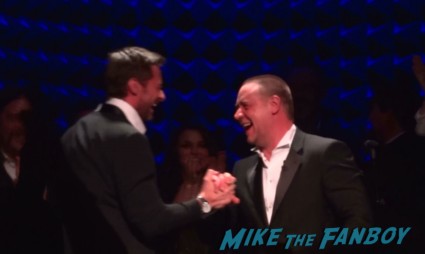 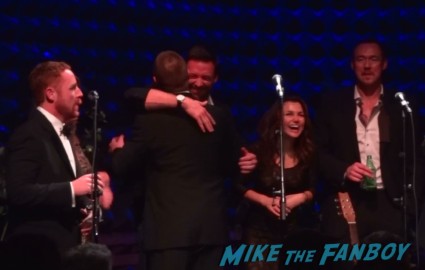 Side note: They end with the last verse which was cut from the film.  (“And this I swear to you tonight…”) DVD extras anyone?

The other highlight was Scott Grimes on “Man in the Mirror” with the full company as back up on the song.

Yes, Javert, Eponine and Valjean sing back up on a  Michael Jackson song. A bit surreal, but a great number and Scott should sing more often…

Afterwards, we head outside and wait for Hugh to exit.  I’m really hoping to get him on my Les Miz poster and take some pressure off of the premiere.  We are the only ones from the show who are waiting and are joined by 7 other pros so there are 10 of us in total.

We expect Hugh to grab a drink with the cast (or more drinks since they did start during the show!), so it may be some time before anyone leaves. At around 1 am, I see Hugh leaving and we spring into action.  We make it over to Hugh before the pros do.  We ask him for a quick autograph and he actually stops for us (yeah!) He signs more than “HJ”!  (Woo hoo!) 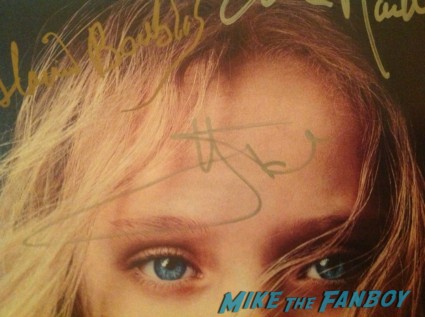 I thank him for singing “Confrontation” and tell him it was amazing and he smiles and says he didn’t know they were going to do that.  Really?  I go back and look at my video and see Hugh’s puzzlement when the first notes play and then Russell taunting Hugh with “Surprise!” in the middle of the song.  Ah!

The pros swoop in and he immediately switches to “HJ” for them. I see him take a picture with one of them so I get back in and ask if I can get a picture.  He says “yeh, sure!” with a smile and I get a picture with Hugh.  Woo hoo! A lot of pressure off of the premiere! 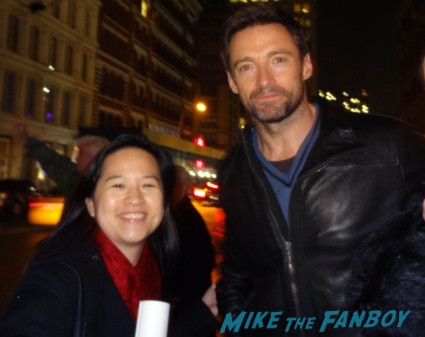 Hugh finally gets into a car (and they have to remove pros out of the way so Hugh’s wife can get inside) and he drives off.  Whew!

We thank security who comments that he normally doesn’t sign so it was good that we three girls got to him first – and he thanks us for being very considerate with Hugh. Security approved then! Yeah!