My first introduction to Sam Elliott was in 1975, when I went to see the film “Lifeguard” after having a picnic on the beach with my best friend Linda. In the summer, we walked to the beach around 3 times a week, so the day after seeing it, we went to our regular seaside spot by stand #15 at Will Rogers State Beach and decided to harass the lifeguard on duty by asking him if her knew he was “every girl’s summer dream,” which was the tag line on the movie poster and in the movie’s commercials that were airing frequently on TV at the time.
A few months after that , the film played in second run at the Bay Theatre in Pacific Palisades, which was walking distance from my house, where they showed second-run double-features for $1.50. Naturally, with a price like that,we spent a lot of time there, taking in just about everything that played in the twin auditoriums. We also discovered at some point that, there was a closet near the ladies room that stored all the movie posters they used for the display case out front. Sometime after Lifeguard had left the Bay, I liberated the movie poster and hung it on the wall in my bedroom, where it stayed for many years. Too bad the management generally kept that door locked or I’d have a lot more stories that started out this way.
Flashing forward 40 years, I went to a 2015 screening of the film “Grandma” which included a panel with some of the films stars and creators, including Sam Elliott. I brought my beloved but fragile poster along with me in the hopes of getting it signed. I approached Mr. Elliott after the panel and said “would you sign my Lifeguard Poster? I loved the movie so much, I stole the poster from a theatre in 1975.” His immediate response was an incredulous “Jesus Christ,” in that signature, deep grumble. Thankfully, he wasn’t too freaked out, and also posed for a picture with me, which you can tell from the look on my face kinda freaked ME out. Sign. My summer dream from the forever ago finally came true. 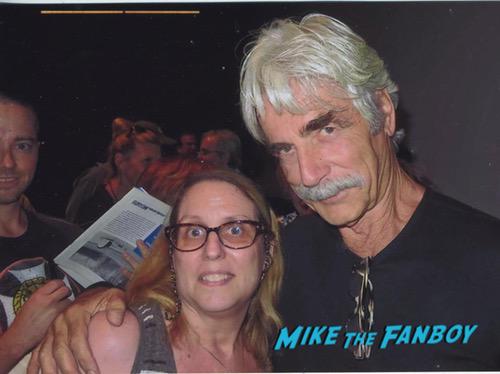 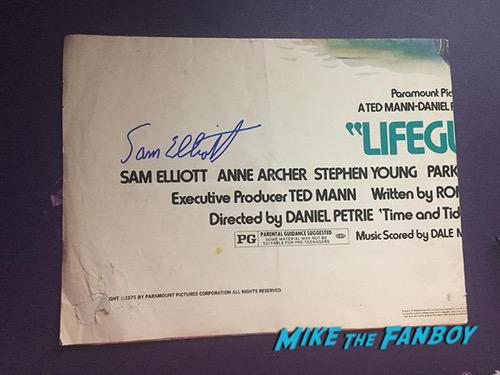 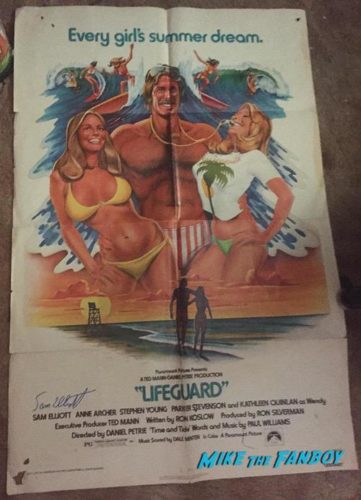