Suddenly Susan did an excellent recap of Comikaze recently and the… Uh.. Joy that was… And now The Novel Strumpet sent in her recap of San Diego Comic Con! It’s so interesting to compare the two, not that anything can really compare to Comic Con.

Still, once the bar is set that’s where everyone should strive for. So, I’m glad to take this look back at Comic Con 2012 with The Novel Strumpet! I feel like this year came and went… (when did it become October?) and this helps me remember the crazy year that was!

Check out the Strumpet’s recap of Comic Con 2012 after the jump!

Was that really over two months ago? Did it even happen? What have I been doing? Yeesh. Why is it that I have less time in my life now that I have only one job than I did when I had two? It’s been so long, that I’ve decided to just give an overall impression because it was such a blur, I mean this year went really, really, really fast!

As has been our tradition the past couple of years, Mike and I headed down to San Diego for Preview Night. By the time we reached our hotel and stored our luggage we were hungry. So we headed to the Kansas City Barbeque to do two things: 1) Eat! and 2) Get Mike’s pic at a film location. I mean it’s Mikethefanboy so we have to, right? 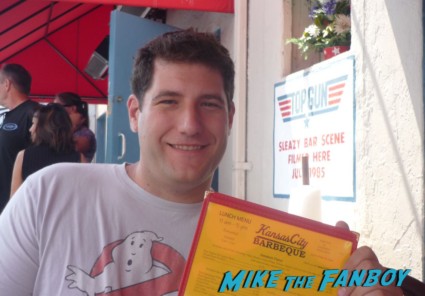 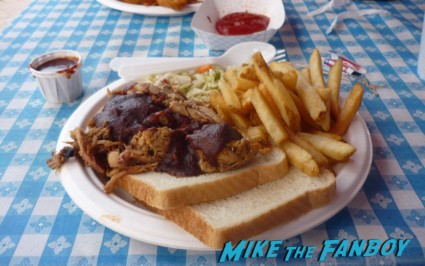 Being a Southern gal I love me some BBQ, and this stuff was good. If you’re ever in San Diego you definitely have to try them out.

After lunch it was time to pick up our badges and make it official. Which we did a lot faster than I thought…not that I’m complaining. Of course we had to hang out for a couple of hours in a line (what a surprise) to wait for the exhibit hall to open. Finally it did and Mike and I divided to conquer.

I don’t know what he did but it probably had something to do with movies and tv, I spent my time mapping out all the book booths and heading up to Artist Alley to check out deviantART’s set up. They were in the house: 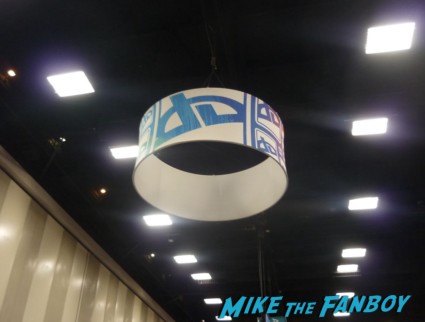 The rest of the night was pretty tame, we had dinner with Suddenly Susan, then off to bed to get some rest and prepare for the next day.

This year I decided to cosplay a couple of days. Thursday was my “Steampunk Assistant Chef” day: 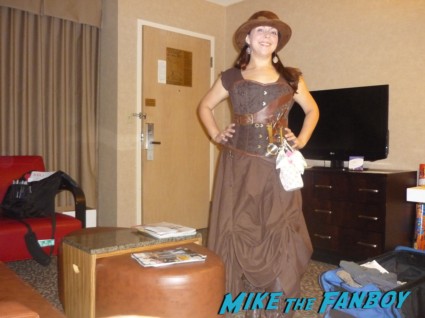 I stole this idea from some work colleagues….mwahahaha.

My first panel was “The Witty Women of Steampunk” which I almost missed because I stood in line for the wrong room and by the time I realized that the room my panel was in was full. I did get in about halfway through. YAY!

After it was over I headed over to A&E’s COMA pop-up med center across from the Convention Center. First all “patients” were given ID bracelets: 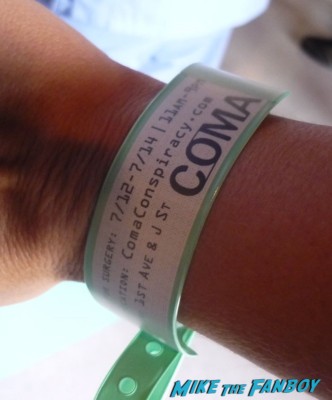 Then we got to walk through some creepy rooms with fake surgeries, “dead bodies” and people doing strange things. We got pics of ourselves on green screen and were sent this image: 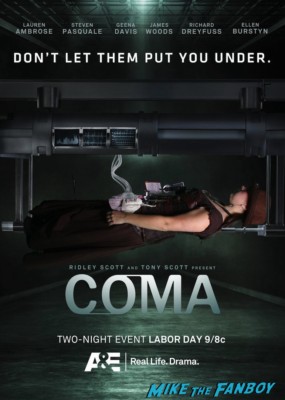 Everyone was given the chance to get a COMA tattoo. It took a wee bit too long to do, but the end result was amazing: 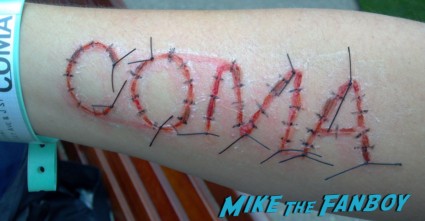 For the rest of the day people were asking me if it was real. It took nearly 3 days to come off…

After that it was back to the Convention Center for authors and panels. First I got Andrea Cremer: 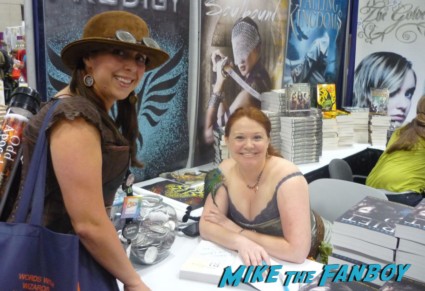 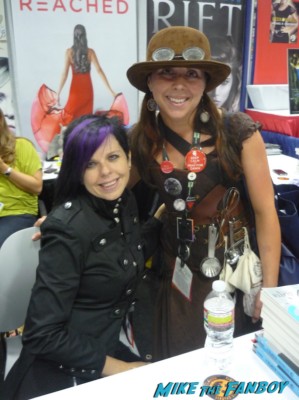 Then to the Simon and Schuster panel to see what was up and coming.

Oh, and did I mention there was a little matter of yours truly doing her first interview? Look for that soon! It’s with author Lauren Beurkus.

All in all a great start, if a bit of a blur since I was stressing over the interview so much…hahahahaha.

This was a plain clothes day. My first panel was “Remixed Fairytales and Superhero Lore” 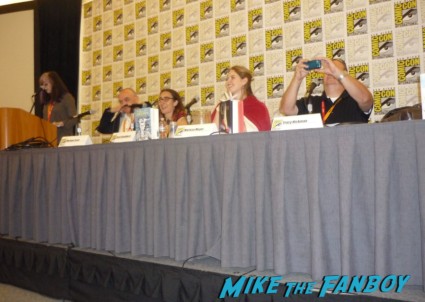 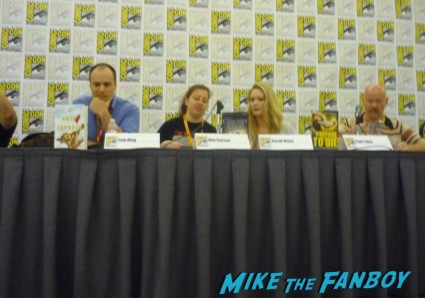 The next one was “Paranormal Love Potion” because, I’m sorry, but I am NOT waking up and getting in a line at 5am for the cast of “Firefly”. I mean I love the show (in fact, blasphemy about to be uttered, it’s the only Joss Whedon show I like) but I would never call myself a Browncoat. I’m extra glad because not all the cast was there and after asking some attendees discovered there were really no big announcements. 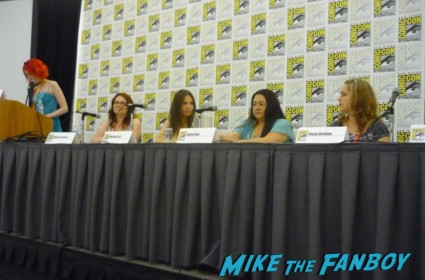 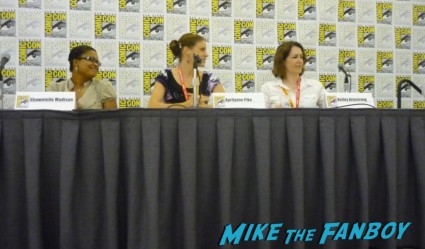 After the panel was over I went outside for some air and to “sight see” a little. Meaning take in some of the costumes. There was a big converging of comic characters for photo ops. If your town was destroyed that day, you now know why. 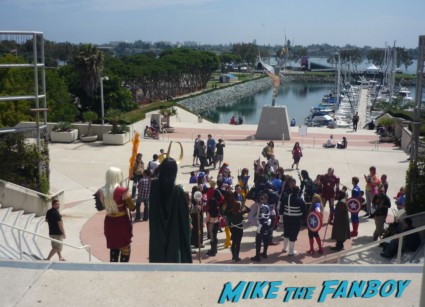 Then I headed back to the convention floor for my 2nd interview!!! This time I got to speak with Mark Z Danielewski.

After that awesomeness I walked the floor some looking for goodies (meaning books, books and… guess what… more books!) then off to the What’s Up With Penguin panel, which is my favorite of publisher panels! The others are always exciting, but for some reason the energy in the Penguin panel is always super upbeat and exciting.

Another costume day, this time I did a slight homage to Ivy Hisselpenny from the “Parasol Protectorate” series since it was GAIL CARRIGER DAY!!!! My friend Kelly from DemonLover’s Books and More was able to come in for the day and it was nice to have someone to geek out over books with. Plus that meant I had a person to take photos for me…mwahahahaha 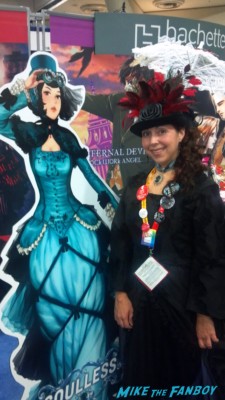 We walked around a bit looking for…you guessed it…BOOKS, then headed up for our first panel “Hot Town: Faeries in the City: Urban Fantasy” 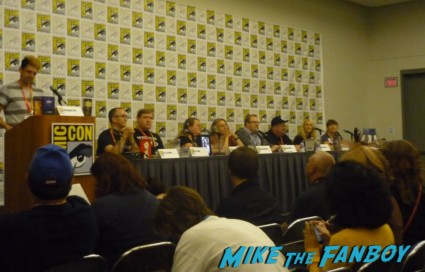 We basically camped out in that room (yes I am one of those people, but you kind of have to be a bit of an a**hole, otherwise you’ll miss stuff.) so I could get a good seat for *drum roll* GAIL CARRIGER!!!! Who was looking awesome in her spoon corset 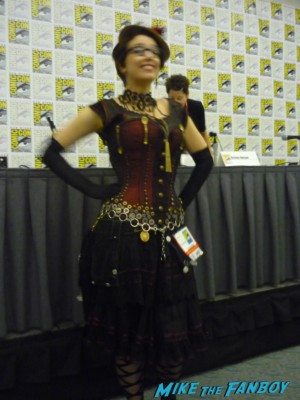 I loooooove the “Parasol Protectorate” series and can’t wait for her two new series. After the panel we all headed over to the signing. 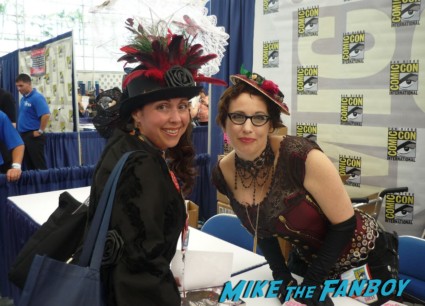 After that I waited in another signing line to get Deborah Harkness and Orson Scott Card to sign some books and wound up getting a couple of the other authors as well. I didn’t get into the panel because I showed up 15 minutes before it started and it was full. Probably because other people were squatting inside. It’s a hard thing to get mad at. I mean on the one hand it’s awesome they don’t kick you out if you have back to back panels, but it sucks because people will sit in one room all day for one panel which is why Hall H and Ballroom 20 are such a mess. But whatever, I’ve done it so therefore I’ve got no moral high ground to stand upon.

After meeting up with Kelly again and getting some grub we headed back to the convention for the “What’s New at Harper Voyager” panel. Which was a lot of fun, they’ve got some really cool things coming down the line.

Last day already!?!?!?! I feel like we just got here. Except my shoulders have a constant ache in them from my heavy bags. Mike and I came with a few bags and left with this: 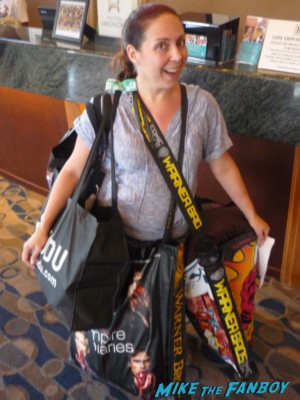 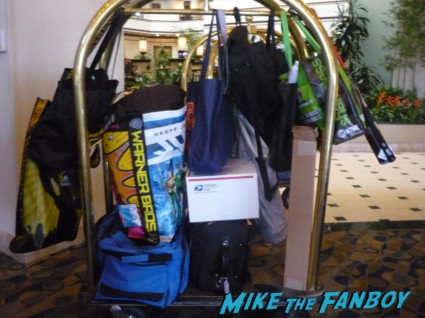 This was my walk the floor for any last minute fun stuff. And my last panel was “Foes Beyond Fur and Fangs”: 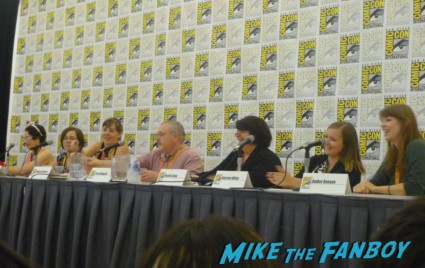 I have to say this was one of the funniest panels I have ever sat through. I don’t know if everyone had reached end of Con madness (I know I had), or if they were just feeding off each other, or if it was the topic, but they had me in stitches.

Then it was back to the hotel to grab our stuff and leave. WAAAAAAHHHHHHH!!!!

So on top of the awesome books and swag I got (some of which may be going into giveaways…hint hint), there were some really cool panels I just happened upon, awesome costumes, enticing booths, etc. etc. etc.

so here are a few more pics just because: 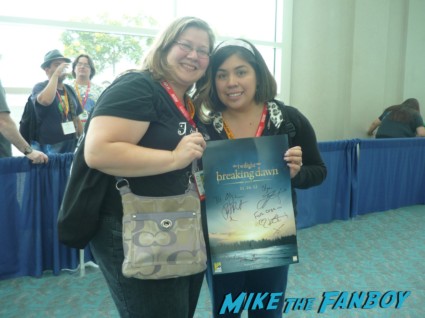 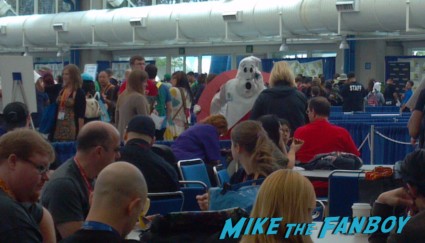 Cool artist panel I sat in on. They were drawing while talking to us 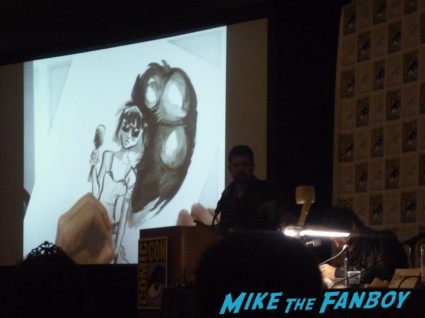 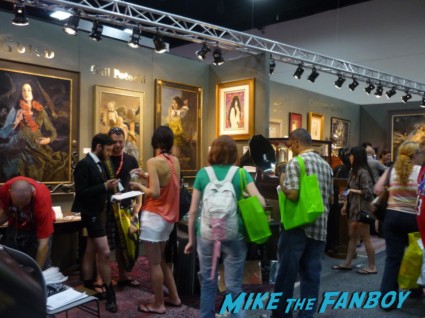 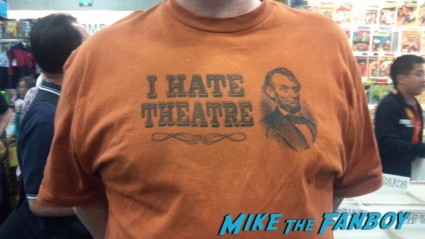 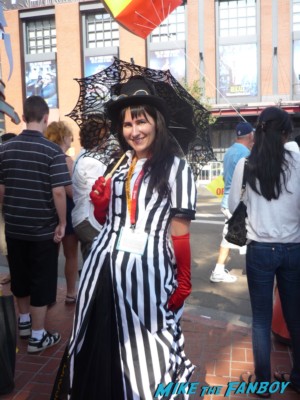 Says it all ;P 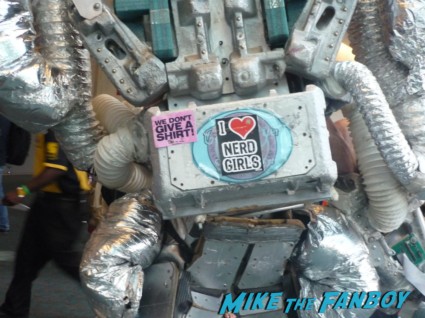