I’M THE SCANDAL. And the best way to get rid of the scandal is to shut it down.

When it comes to shows that hit the cultural zeitgeist, there’s none more prominent than Scandal. Created by Shonda Rhimes, Scandal is a television series starring Kerry Washington as Olivia Pope. It’s a political thriller, set in Washington D.C. that takes place primarily at Olivia Pope & Associates which is a crisis management firm, and at the White House. 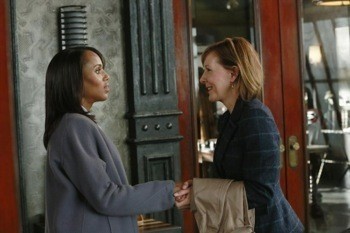 Olivia used to be the White House Communications Director for the president, she left that position to start her own firm. Surrounded by her staff, Olivia has decided to protect the image of the nations politicians and elite.

Scandal: The Complete Third Season has just been released on DVD and let me tell you, if you haven’t started watching Scandal, what are you waiting for? This season has more drama and thrills than the first two, even with a shortened 18 episode season (This was due to Kerry Washington’s pregnancy). 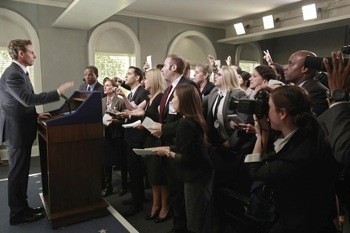 When the third season opens, the aftermath of the revelation that Olivia is President Grant’s (Tony Goldwyn) mistress is in full effect. Many clients drop the the firm and her relationships are in jeopardy. Olivia’s Father (Joe Morton) wants her to hide and let the situation blow over. After talking with Cyrus (Jeff Perry), Olivia decides to stay. She uses the secret code the president gave her to set up a meeting with Mellie (Bellamy Young). In that meeting they come up with an explanation about the affair, while Olivia’s team and Cyrus get together to save Olivia and the President. 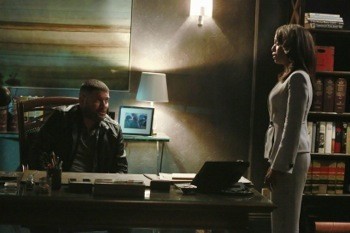 That’s just one episode in the twisty, turning world of Scandal. Rest assured that every episode is just as thrilling as the next and personally, I think DVD is the best medium to watch Scandal. Here you can really relish every twist and turn without having to wait a week to find out more. It’s the perfect series to binge watch, because so much happens in each and every episode. 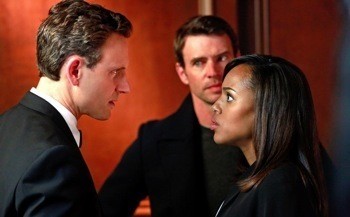 The best episodes of season three are:

Guess Who’s Coming to Dinner – This episode slowed down the action and let the characters breathe a little, which was a nice change of pace following the premiere. It let us dive into Olivia’s past and learn why she hasn’t spoken to her father in five years. 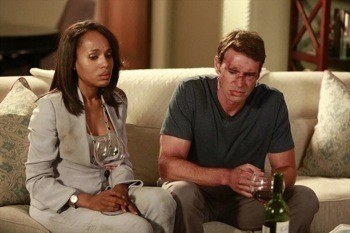 More Cattle, Less Bull – We find out the “real” culprits behind the Kennedy assassination, there’s the White House correspondents dinner, and some of the biggest reveals in the history of the show… Just a little plane crash madness. This episode had some of the most jaw dropping reveals in Scandal history. But really… Wasn’t the best thing Olivia in that dress?

We Do Not Touch The First Ladies – Probably one of the most hectic episodes of the season (and that’s saying a lot)! There are seven different plot-lines converging but as the title suggests the one that wins the top prize is Mellie’s. We learn more about the first lady’s past, her relationship with the Vice Presidential pick and more. 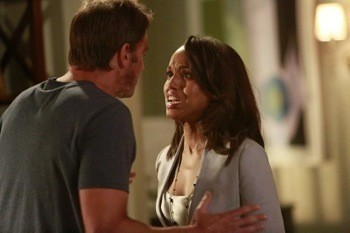 The Price of Free and Fair Elections – The season finale. Now Scandal finale’s are always full of “WTF” moments, and this one is no exception. This was like vintage Scandal, especially that end montage. I’m not going to spoil it for you, but let’s just say, a lot happens. 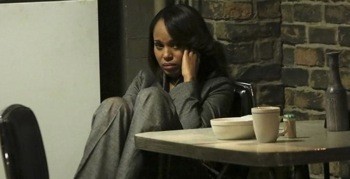 Special features included in the DVD release are:

An extended episode for the finale, The Price of Free and Fair Elections. I really liked the extended version and usually I’m a broadcast episode purest, but with a finale like this one, the extra time was well deserved. 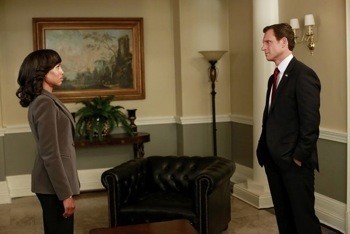 Creating L.A. For D.C. – This fun bonus feature goes behind the scenes to show how Washington is recreated in Hollywood CA. I love featurette’s like this. I think that every show should include them, because it really brings the fans behind the curtain to see how the production does what it does. It also spotlights a lot of the production people who make what you see onscreen possible!

Jeff Perry Spotlight – A nice little feature on actor Jeff Perry who plays Cyrus, the Chief of Staff and friend to Olivia. It’s a nice addition to the set and also includes other cast and crew talking about Jeff and his acting history.

Overall, if you’re looking for a twisty thriller full of jaw dropping moments, Scandal is the show for you. Kerry Washington does an excellent job holding the series together as Olivia and it’s such a fun ride. Plausible? Eh, I’m not sure. Fun? Most definitely!

Scandal: The Complete Third Season is out now on DVD! 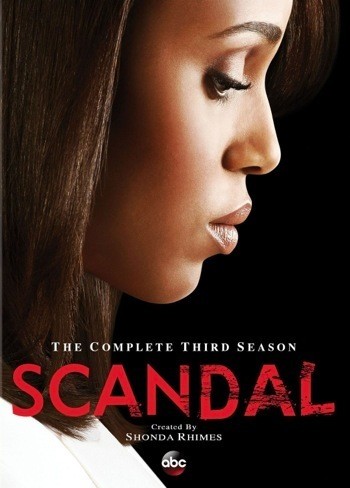