You know…. I always love when someone gets to meet the one person that they love. There’s something about meeting an actor that you have formed a connection to over the years. I know for me it’s those people who I really hold as my top celebrity encounters.

Jenna was able to meet one of her top people ever. Quantum Leap star Scott Bakula. Scott was doing a rare talk show appearance and he was very cordial and kind!

Check out Jenna’s full recap after the jump!

Intro to the television series Quantum Leap: “Theorising that one could time travel within his own lifetime, Doctor Sam Beckett stepped into the Quantum Leap accelerator and vanished… He woke to find himself trapped in the past, facing mirror images that were not his own, and driven by an unknown force to change history for the better. His only guide on this journey is Al, an observer from his own time, who appears in the form of a hologram that only Sam can see and hear. And so Doctor Beckett finds himself leaping from life to life, striving to put right what once went wrong, and hoping each time that his next leap will be the leap home…”

Mike, I never have asked for you to share one of my celeb encounters but this one is one that touched my heart and I couldn’t not share it with everyone.

Meeting Scott Bakula has been a dream of mine for many years. I’m a huge fan. I own all the seasons of Quantum Leap, I watch it religiously everyday. Yes, I seriously have had dreams where I met him and he signed for me and everyone time I woke up it never happened. Well it finally happened!!

Well, this is it everyone. My favorite photo opportunity of any celebrity I have every met and I never thought it would happen, ever! I met Scott Bakula of Quantum Leap fame (freakout! my favorite show of all time) today. He was doing a special talk show appearance and it’s extremely rare since he never does premieres and rarely talk shows. Unfortunately I live in San Diego and so I had about a 2 and a half hour drive to Hollywood, I had chores, errands I had to run etc. and I was getting packed for a trip out of state.

Luckily I arrived ten minutes before the talk and thank God I hit no traffic. I didn’t want to take any chances, ya I know almost being late and I all but I mean with showing him I truly was a fan and so I wore my Quantum Leap shirt I purchased at comic con last year and I babbled like an idiot in front of everyone about how he’s my favorite from my favorite show. I was crazed. People told me to calm down. This is how nice people in Los Angeles can be. One person told the talk show security about me coming a long way and being his #1 fan and they put me at the front. They said they would try and have him come over my way.

The talk was nice. He spoke about working with Michael Douglas for his new HBO movie “Behind the Candelabra” and about him and his mustache he grew for the role for a while. 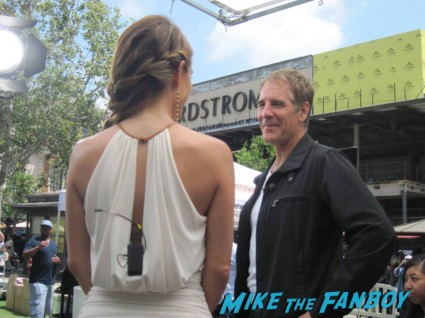 He said something to the extent of “My kids didn’t like it.” No one did Scott. 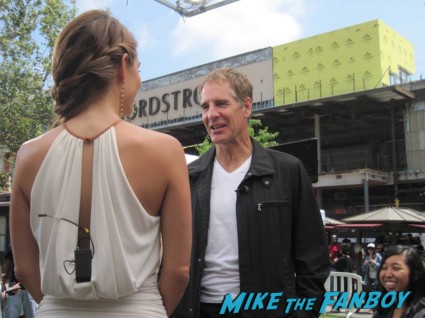 After the talk I yelled Scott, Scott!! in the faintest voice cause I was so crazed and he heard me and came over and I started muttering something like “I started watching the show when it was on USA back in the nineties!” It was unreal. My favorite actor from my favorite show and he was coming over!! He signed for the guy next me his star trek Enterprise photo (I have heard that show is pretty good so I need to check it out) and came to me signed everything I had; all my seasons of Quantum Leap that are signable.

I already have Dean Stockwell on my season 5 and Deborah Pratt the executive producer on the other two. The first two seasons are cardboard and not really good for signing.

I then asked him to personalize my dual shot of him and Dean Stockwell and he did. He asked me my name!! 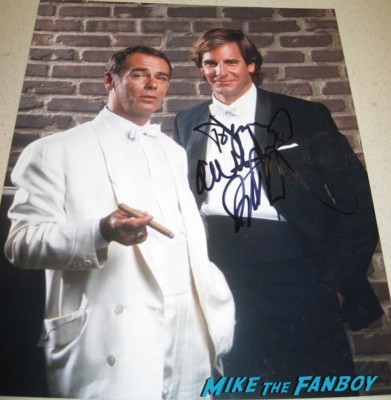 I was unaware of anything happening around me. What I mean is I was in the zone! Floored! LOL So then he starts to get off the stage and I ask him “Can I get a photo??! ” And he said “Take it fast.” You bet I did! And here’s the result. Funny how the pic looks like he’s in mid leap. He had to put right what once went wrong with me not being able to go for him at the 2009 Quantum Leap convention since I was jobless at the time and then he leaped out. LOL Happiest moment of my life!!!! Thankyou Sam Beckett!!! You better believe I’m framing this photo! 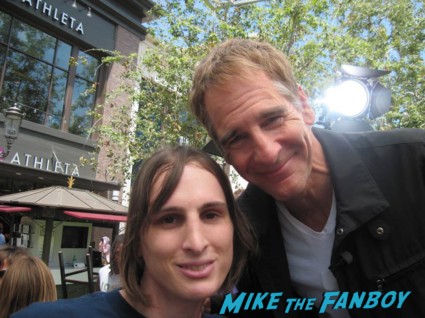