Home / Fanboying! • Stars of the 1980's and 1990's / Scott Talks About Meeting Gillian Anderson! David Duchovny! Chris Carter! And What An X-Files Junkie Fanboy He Is! Autographs! Photos!

I always get excited when people get to meet actors or celebrities that they really love. I mean like, REALLY love. Clearly, I’m met a few in my time, but there’s nothing like that moment when you first start collecting when you have that “moment” that one time when you finally get to meet someone you have respected for oh so long.

You all know what I’m talking about.

In this case, Scott (not to be confused with MTF’s Scotty!) is a giant X-Files fan. Now, he’s met Gillian Anderson and David Duchovny before but when it’s your favorite show it’s just like the first time.
Scott kindly recaps his meetings with Gillian Anderson, David Duchovny, Chris Carter and more below!

I should start by saying that “The X-Files” is my favorite show. And anything that is a ‘favorite’ also becomes an obsession.

I was able to meet Gillian Anderson before and Chris Carter as well. There was an event last year that included a meet-and-greet with Gillian and Chris. Gillian Anderson was kind and engaging. This was my third time meeting her and it seems as if she gets more fan friendly with time. She seemed genuinely excited to see us. I was fortunate enough to get a great autograph on my “The X-Files” morgue picture. It’s an amazing shot from Mark Seliger.

I’ve had the privilege of meeting David Duchovny 8 times. Four of the eight I was able to get a photo with him. 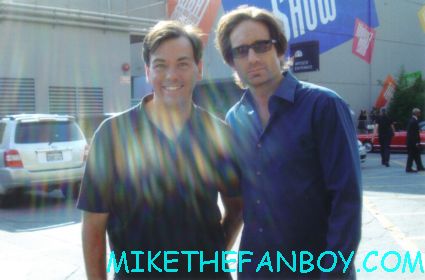 The man is lovely and very fan friendly, especially to X-Files fans. 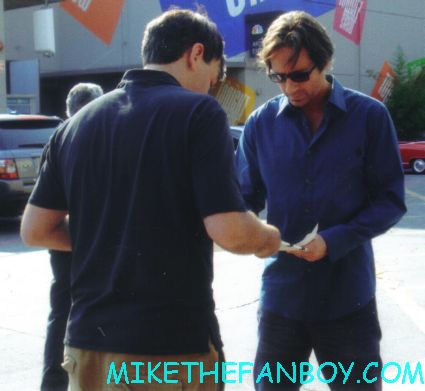 I’ve seen him literally get out of his car on the side of the street to sign autographs for fans. He is that committed. 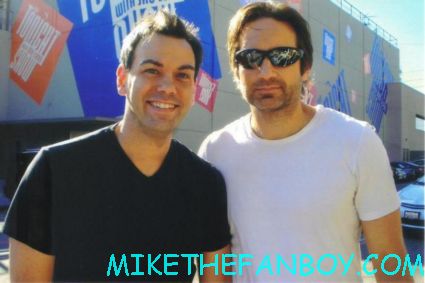 Having said that- I am beyond thrilled and thankful that he took the time to walk over, sign autographs, and take the occasional photo. I am also beyond thrilled that, to my surprise, he is ‘smiling’ in my photo.

Arrived at 5:50. I am not a “fanboy” per se, but I see a lot of faces in line-up that are familiar from my two other trips to this talk show. I’m not sure if they are collectors- or just fans with similar interest.

Regardless- I take my place in line. It seems everyone knows one another- and- being the stranger amongst the group- I eavesdrop on conversations. A lot about “Avengers”, “Castle”, who has autographs from dead celebrities (a Farrah Fawcett photo on an IPhone draws much jealousy amongst the collectors), and, once they’ve warmed up to me, how lucky I am to have Gillian Anderson on my photo (she lives in the UK, she’s never here, etc..). I think that the camaraderie amongst the ‘collectors’ is such fun. There is a reality show waiting to be born from this line-up.

David comes out at around 7:30. He walks straight toward us. I don’t remember anyone yelling his name. He just came over. He’s that kinda guy. He worked the entire line in 5 minutes. Took 4 or 5 photos and was on his way. The only memorable moment came when my friend fumbled with the camera and took what seemed an eternity to take the photo. I honestly thought David might walk off. Thankfully he didn’t. 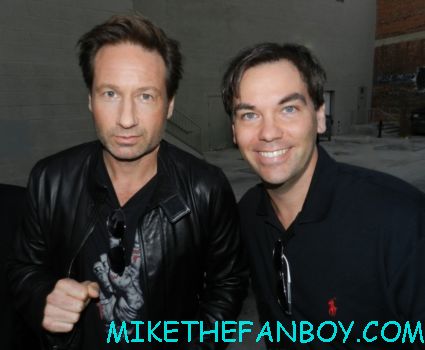 Duchovny is a class act. He’s had an impressive career and has created two very iconic characters. Good mood, bad mood, I don’t care. I will always be a fan. 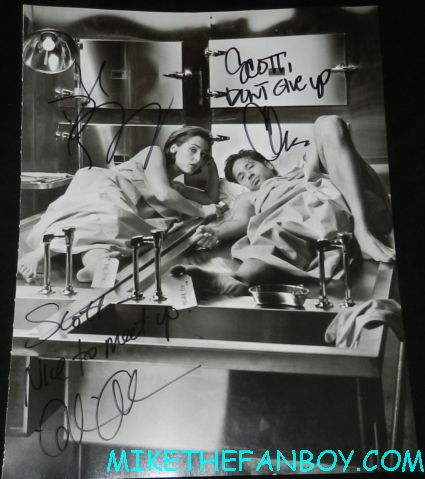 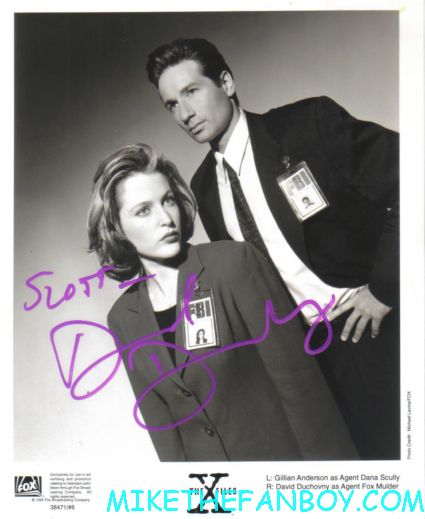