When Scotty loves something… He really loves it. I’m like.. LOVES it. So, when he fell in love with the Foo Fighters back in the day, Dave Grohl jumped to the top of Scotty’s people to meet.

Dave has been out a lot lately with the premiere of Sound City and so Scotty was lucky enough to meet him. Dave Grohl is a cool guy and everytime I’ve seen him, he’s always been nice.

Check out Scotty’s meeting with Dave Grohl after the jump!

One week after the Sound City premiere, there was a Q & A for the film. I would have LOVED to have been inside to actually see the film and hear the session, but it was full. I made my way to the theater to see if I could catch Dave as he entered. I found myself to be the only one there for a good period of time. It always amazes me that a band like the Foo Fighters can sell out a huge venue for a concert, and yet when an opportunity arises to possibly meet Dave, there are very few people. 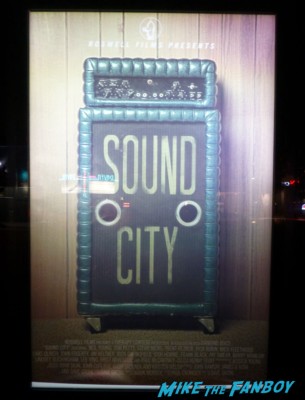 Fifteen or twenty minutes before the Q & A was supposed to start, two other fans showed. Dave finally arrived. We almost missed him as he had his hood on and arrived with an entourage of friends. We called to him and he joked with us that we were “Dorks.” I know that does not read as it sounded, but he was totally joking and SO friendly. I wore my Foo Fighters shirt to let him know I was a big fan. He signed one for each of us and thanked us for coming out. His normal autograph is his initials, but many times looks like “D, D.” His signature tonight is one is the best “D, Gs” I have seen. He actually made the G! Only a “Dork” like me would see the difference and LOVE it.

We waited for him to exit. I wanted to get a picture with him. As the Q & A let out, only a handful of fans waited. Again, I was shocked that the whole theater did not wait. I guess fandom is different for everyone. 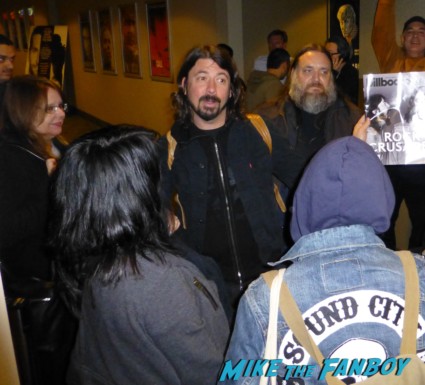 Dave signed for those who waited and took a picture with me. I am an even bigger fan than before. Dave is a major player in rock history, and he is so gracious to fans. Major props to him! Thanks Dave for another GREAT night! 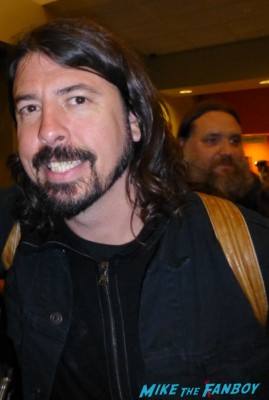