“I’m not crazy M’Lynn I’ve just been in a very bad mood for forty years!”

Ah, Oiser Boudreaux you ornery devil! LOL… Now, Steel Magnolias has been a staple in my DVD player since before God was a boy… Okay that’s two Steel Magnolias quotes… lol… Couldn’t help it! I have been trying to work on my Steel Magnolias cast piece for a few years now, and I’m only missing Sally Field… Scotty has just started relatively speaking and has Julia Roberts on his poster… Not a bad start! lol…

So, he was out and about trying to get Ms. Shirley MacLaine! So, share in his success and his heartbreak after the jump!

Back in April I was excited to read that Academy Award winner Shirley MacLaine would be doing a show at California State University, Northridge’s Valley Performing Arts Center. I am a big fan of Shirley’s work. I went to the venue early to scope out if there would be any access after the show to get Shirley to sign an autograph. As I looked around, I saw the box office and a sign that offered student tickets for $10.00. I had my student I.D. on me and thought I would check out the show.

I am SO GLAD I did because the show was AMAZING. Shirley came on stage and gave a retrospective on her life through pictures and movie clips. There were some really interesting facts and gossip about old Hollywood. Shirley seemed to be like an old friend sharing memories with you. I was jazzed because I thought she would be totally cool to sign for me after the show. Once the show let out, I made my way back to where the stage door was and so did about 100 other people. SHOOT! I made way up to the front since I was a patron of the show. Ha ha!

About an hour later, Shirley made her way out the door and made a B-line for her car. She was not in the most pleasant mood and was not signing. Right as she got to the car she grabbed a pen from a fellow autograph seeker and signed for him and another fan, and got to me. I was so excited as I had my “Steel Magnolias” one sheet and thought I was going to have victory. 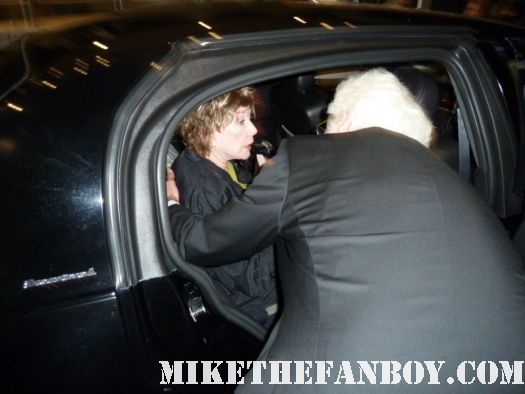 Well, I had it rolled face out on a tube thinking she could sign the poster on the hard tube. She looked at it, and me and said in a gruff whisper, “Too difficult.” I about died as I thought, “How many times am I going to be in front of her?” I did bring my “In Her Shoes” DVD too, which I made a quick grab for, and she signed it. 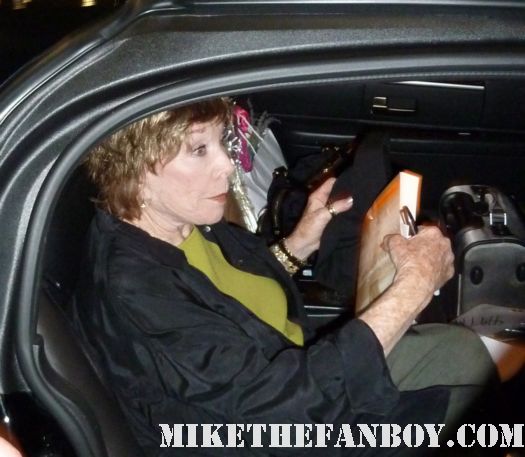 My luck can be so bad sometimes. I was shocked that Shirley was not as friendly as she was on stage. Oh well, you win some and lose some. I knew she would be doing a show in Long Beach again in September and figured I would try again then. 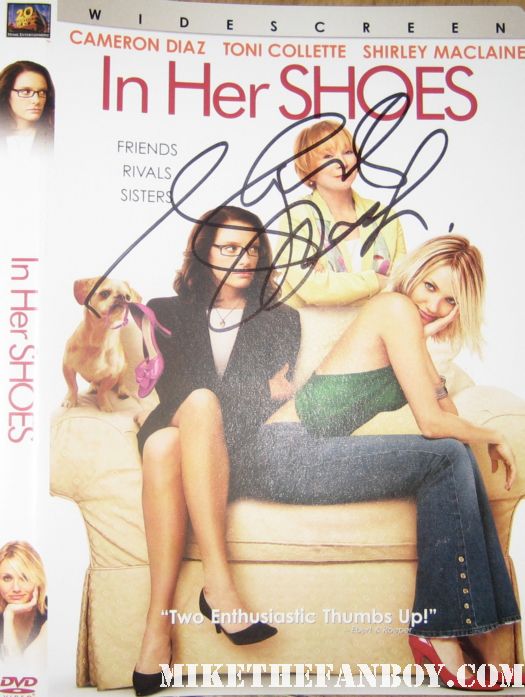 Cut to September….I made my way to California State University’s Carpenter Performing Arts Center with “Awesome Anushika.” She wanted to make the adventure with me. I had my “Steel Magnolias” one sheet with me again. This time, I left it folded. One sheets from the 1980’s were luckily sent out folded, so I had it folded near her name with a board under it so she could sign. When we arrived, there were only three other collectors down there as opposed to the 100 there were in Northridge. Thank goodness!

The show let out and we waited. Some drunk woman, who saw the show, was trying her hardest to get back stage to meet Shirley. She made a couple of attempts and was kicked out both times. Unfortunately, because of this woman, the police were called. The police arrived and informed us that Shirley would not be signing tonight. I was SO BUMMED. We asked if we could still stay. They said that was up to us, but we needed to stay clear of the driveway. We could see her car from the stage loading dock. After an hour or so, they lowered the loading dock door so that we could not see the car anymore. Disappointment! Shirley was not going to greet fans. We thought, “Well, we have been here this long. Let’s wait a little longer.”

A few minutes later we heard the car start, and the door was raised. We held out our memorabilia, and the car pulled out. It stopped and the window rolled down! Shirley said, “You have all waited so long!” 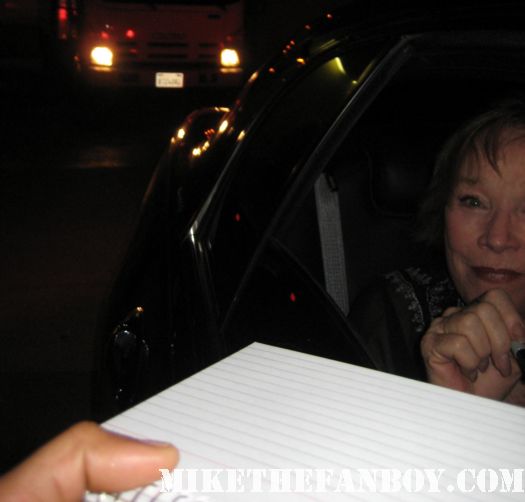 She motioned for us to come over. She thanked us for waiting and began signing our things. She was SO NICE. She even signed our things “Love! Shirley MacLaine.” 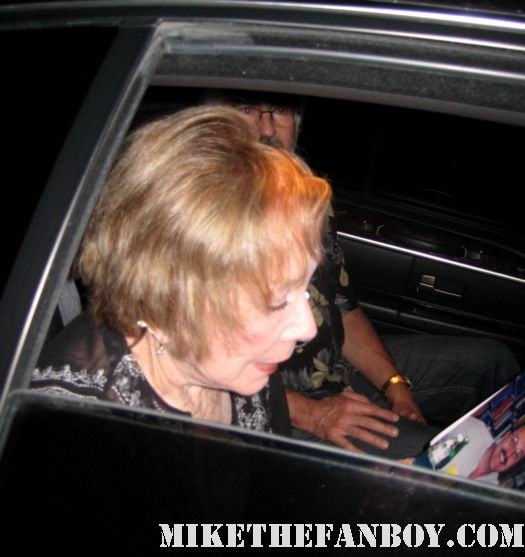 We thanked her multiple times. She was so gracious. I try to remind myself and other fans, celebrities have their good and bad days like us. 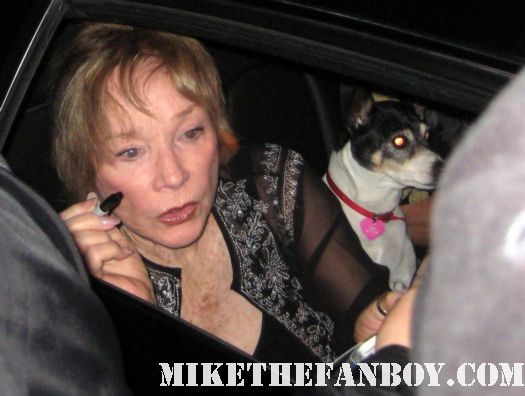 In April, Shirley was definitely having a bad night. I am so glad I made the drive down. Thank you Shirley for making our night!!! 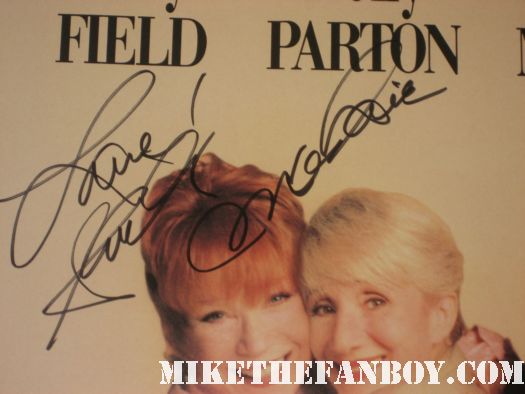