The comic con news is busting forth lately! I’m sure it will only increase as it gets closer and closer to the big event. I still can’t believe it’s this close. Is it bad I’m already tired?

Entertainment Earth and Bif Bang Pow have released five more SDCC 2013 exclusives. Can we say awesome! I love the new bobble head! The pink shirt is awesome on Dexter!

Check out all the new exclusives below! 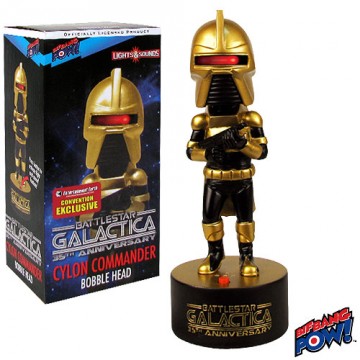 Battlestar Galactica Cylon Commander (Gold) Bobble Head with Lights and Sound: With the touch of a button, this Battlestar Galactica Cylon Commander Bobble Head’s visor lights up, the red light moves from side to side, and sounds are activated. He speaks three series-true phrases that will be music to any BSG fan’s ears: “By your command,” “Colonial Viper squadrons approaching in large numbers,” and “All Raiders are still engaged against the Galactica.” 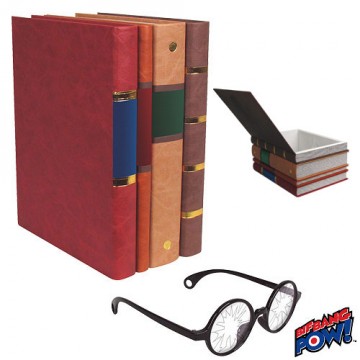 The Twilight Zone Henry Bemis Book Box and Replica Glasses: Bif Bang Pow!’s third prop replica from The Twilight Zone! In the intriguing 1959 The Twilight Zone episode “Time Enough at Last,” actor Burgess Meredith played badgered booklover Henry Bemis, a nearsighted bank clerk who found himself in the post-apocalyptic world following a nuclear attack. Henry may be gone, but you can take his place with the remarkable The Twilight Zone Henry Bemis Books Replica from Bif Bang Pow!. This marvelous reproduction includes a stack of Henry’s precious books and a pair of actual glasses! The full-color book stack measures about 9-inches wide x 7-inches deep x 4-inches tall and opens at the top to serve as a storage box. The glasses feature Henry’s signature black frames and thick, clear lenses. Also included is a removable/reusable film that can be placed over the lenses that resemble Henry’s cracked-glasses, as seen in the end of the episode. Henry would be oh so happy! 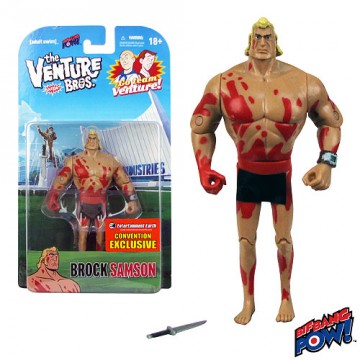 The Venture Bros. Naked Brock Samson 3 3/4-Inch Action Figure: Our incredible follow-up to 2012′s now sold out Bloody Brock Samson action figure! Grab this Naked Brock while you can! The macho secret agent is conspiring to get into your home and your The Venture Bros. collection. Posing as an irresistible articulated action figure from Bif Bang Pow!, Brock Samson stands 3 3/4-inches tall in all his naked and bloody machismo glory. Removable black tape covers his nudity (don’t worry – there is no “junk” behind the tape). Add him to your desk today. 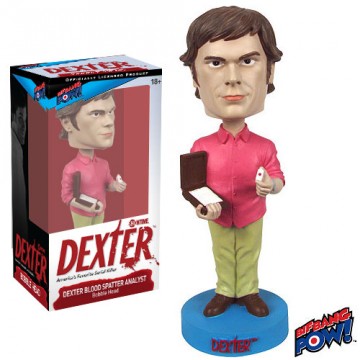 Dexter Blood Spatter Analyst Bobble Head: On the job in his pink shirt and holding a blood slide and slide box, your favorite blood-spatter expert / serial killer from Showtime’s hit series Dexter is here to bobble in this remarkable 7-inch resin bobble head from Bif Bang Pow!. Get ready for fun and plenty of surprised and envious comments when you add the Dexter Blood Spatter Analyst Bobble Head to your desk! Ages 18 and up. 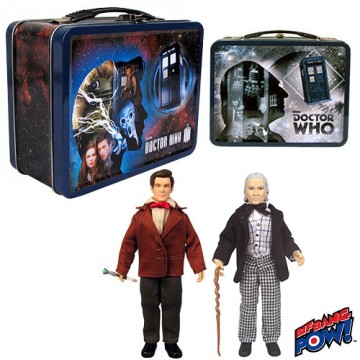 Doctor Who 1st and 11th Doctor 8-inch Action Figures in Tin Tote: Bif Bang Pow! is proud to introduce our First Doctor and Eleventh Doctor 8-inch scale EMCE action figures in an incredible and exclusive way! This Doctor Who 50th Anniversary Tin Tote features plenty of authentic detail and imagery that spans 50 unforgettable years of Doctor Who, from the First Doctor to the Eleventh Doctor to the iconic TARDIS and beyond! The colorful tin box (measuring approximately 8 5/8-inches wide x 6 3/4-inches tall x 4-inches deep) is magnificent enough by itself, but inside you’ll find retro-style action figures of William Hartnell’s First Doctor and Matt Smith’s Eleventh Doctor! The Doctors stand about 8-inches tall and feature real fabric clothing, accessories, and multiple points of articulation.