This Comic Con turned out to be rather worthwhile in terms of cast signings. I had a lot of luck with some of the smaller signings at the Fox booth, and I even scored a WB signing through the online lottery system!

Prior to attending the Con, I put all of my Friday chips on the CW show The 100 and wouldn’t you know it, I won! I recently binge watched seasons 1 through 5 (which are only 12 episodes each) in about 3 weeks. I absolutely LOVE this show so I was thrilled to meet some of the cast. Their signing consisted of Bob Morley (Bellamy), Eliza Taylor (Clarke) and Richard Harmon (Murphy). 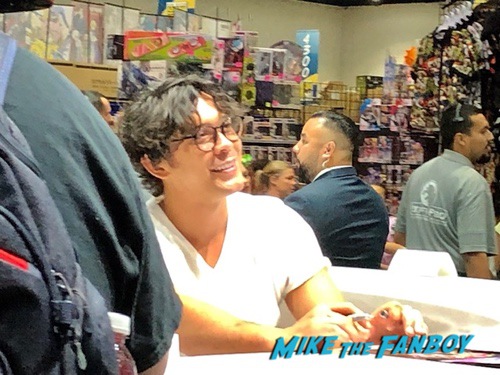 Bob is adorable and he and Eliza, who recently married in real life are the cutest couple. Both we friendly and engaging. I had to tell Richard how much I loathed his character in the beginning and wanted him killed off, to which he replied “how dare you”. Then I told him how Murphy has become one of my favorite characters. “That’s more like it,” he said playfully. This was a quick but fun cast meeting!

At the Fox booth I was able to meet the cast of the new show What Just Happened? The poster was signed by cast members Fred Savage, Tyler Ritter, Kevin Zegers, Shiri Appleby and producer Jon Cassar. The cutest part was that Fred’s 6 year old son (and I’m 99% sure on that) was there and asked your name and then printed it on the poster. Then Fred wrote “to” above it and “best wishes” below it. Super cute. I told Fred that The Wonder Years was like a warm blanket – you put it on and it makes you feel good. He was truly blown away and told me that was the best analogy he had ever heard. Yay me. 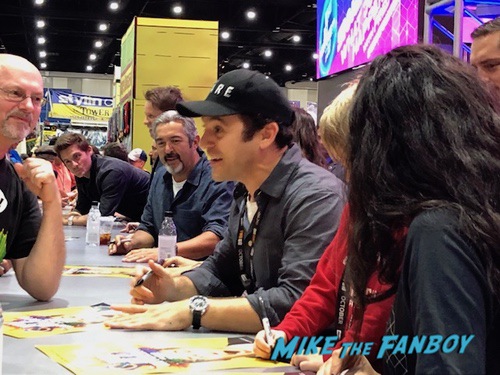 Next was the cast of The Orville. In my 15 years at Comic Con I have never been able to meet Seth MacFarlane so this was exciting. I told him how much I loved everything he had hand in creating and what a big fan I was and it was so great to finally meet him. He was sincerely thankful and asked my name, then shook my hand. The poster is amazing and was signed by Seth, Adrianne Palicki, Penny Johnson Jerald, Scott Grimes, Peter Macon, Jessica Szhor, J Lee, Mark Jackson, Chad Coleman, David Goodman, Brannon Braga, producer Jon Cassar. Scott Grimes seemed a tad off, as he is usually very friendly and fun. He was rather reserved and quiet this day. Makes sense now since the news of his divorce to Adrianne Palicki broke 2 days later – yikes! 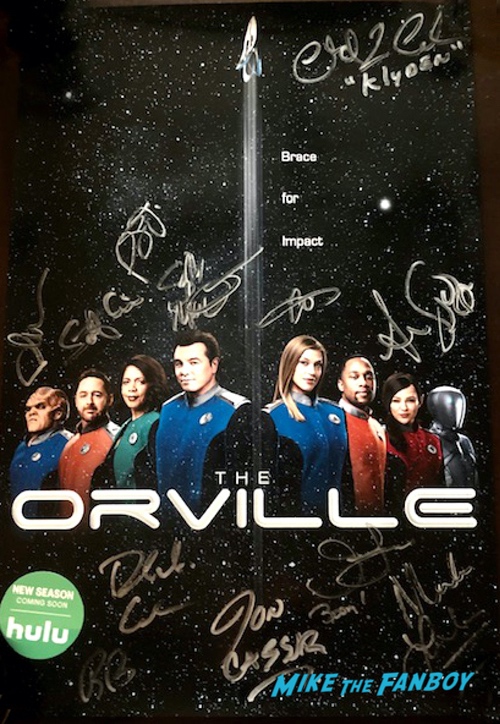 I also got into a signing for the Fox show neXt, which airs in early 2020. The cast was nice, but it’s hard to talk about a show that no one has seen yet. I was able to meet cast members John Slattery, Michael Mosley, Eve Harlow, Jason Butler Harner, and Fernanda Andrade as they signed a pretty cool looking promo poster. 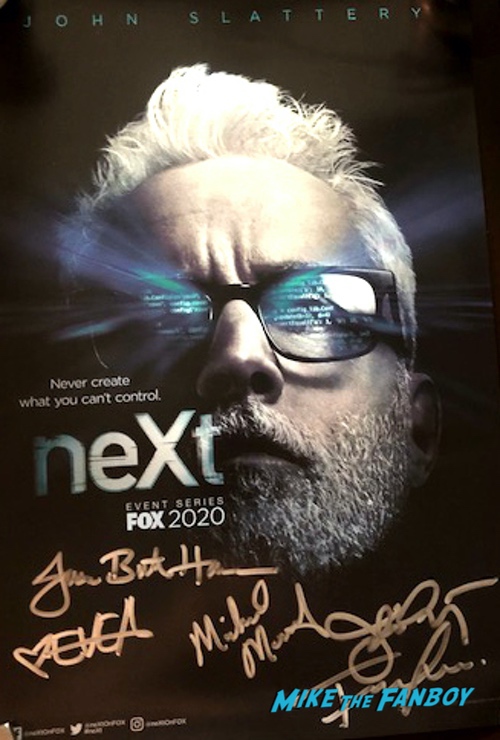 The last signing at Fox was for the new animated series Solar Opposites. The cast in attendance was Justin Roiland, Sean Giambrone, Mary Mack, Mike McMahan and Josh Bycel. Now I have to tell you I have a 12×18 poster of The Goldbergs that is signed by the entire cast, including George Segal. The only person missing is Sean Giambrone. I carried that thing with me to the past two Comic Cons as well as two Paley Fest events and each time Sean cancelled due to his school schedule. So, this year I decided I wasn’t going through the hassle. Well, Sean was there of course and the signing was so laid back and pretty empty that I could have easily slipped that poster for him to sign as well. Ugh. He’s a very sweet kid and was extremely fun to chat with along with the rest of the cast. 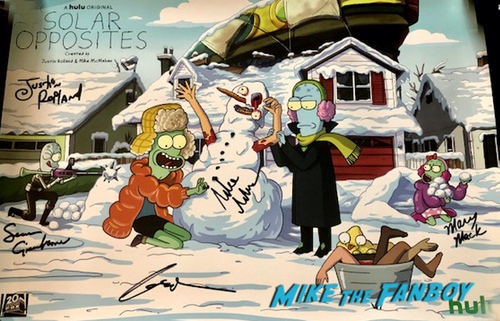 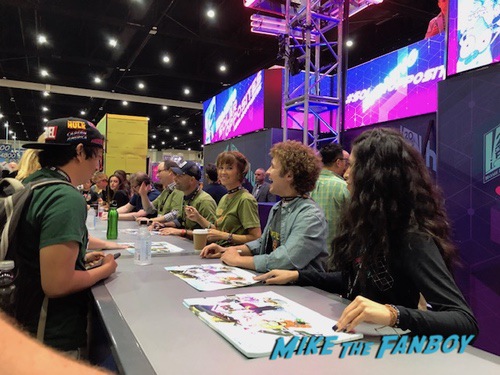 The ABC booth had a few signings this year and I was lucky enough to get into the cast signing for the upcoming series Stumptown. This had a large cast, but each actor was very engaging and took a few moments to chat. They included Cobie Smulders, Jake Johnson, Tantoo Cardinal, Michael Ealy, Camryn Manheim, Adrian Martinez, Greg Rucka, and Cole Sibus. I was so pleasantly surprised to see Michael Ealy. I loved him on Almost Human and Secrets and Lies, which I told him. He thanked me, said I was awesome, and told me to watch this new show. 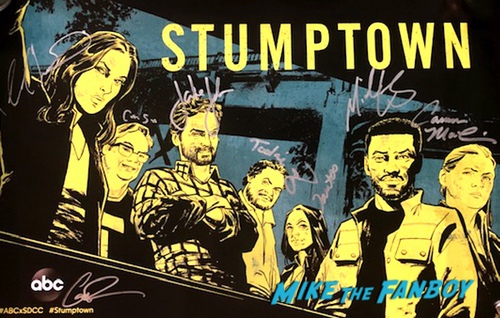 I got to meet the cast of the television series The Order, as a friend was double booked so I went to the signing for him and got a photo with star Thomas Elms. He was super sweet and took selfies with anyone who asked. Thomas took our photo since my short arms are the sworn enemy of the selfie. This was the cast’s first Comic Con and they were having a blast. Sarah Grey, Katharine Isabelle, Louriza Tronco, Adam Dimarco, and Devery Jacobs also signed. I was a bit bummed afterwards that I wasn’t able to keep the poster, but it was fun meeting the cast! 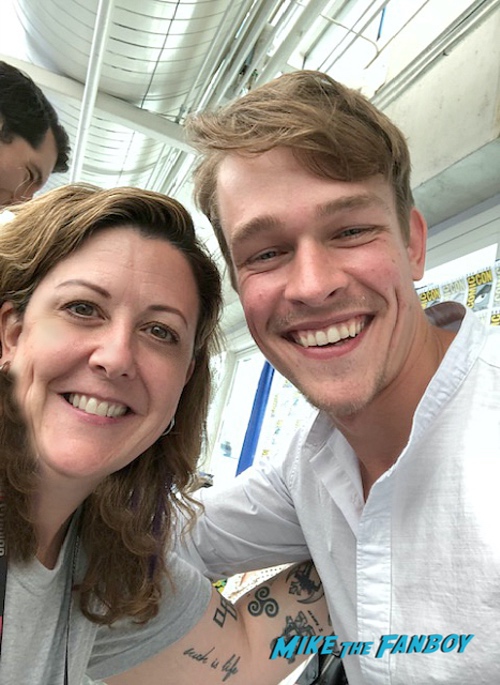 Last, and kind of least, was the Bruce Campbell signing. Although this was originally an online lottery bid event, they were handing out bracelets at convention due to lack of interest and so many people who won the signing having not picked up their bracelets. Bruce was signing any one item, which was cool, however, without advanced notice, I hadn’t brought anything with me even though I have his autobiography at home as well as an Evil Dead comic. So, instead, I got a 5×7 post card of the new Ripley’s Believe It or Not signed. Bruce was pretty engaging, but no photos were allowed with him. You could take photos all the way up to the table, but then cameras/phones had to be put away. He also wanted one person to stand in front of him at a time, which I really respect as sometimes the person ahead of you winds up taking up your time as well and you’re left picking up your signed item at the end of the table. I don’t have a photo of the signed card as I gave it to a friend who’s a huge BC fan. So, at least someone was happy about it. 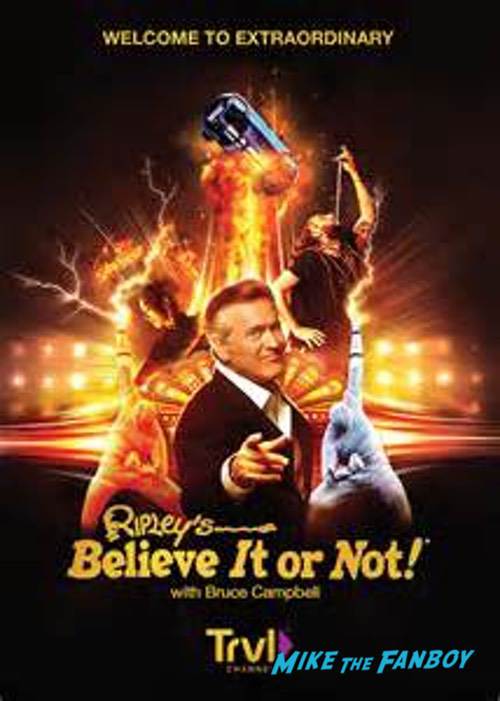 That’s it for this year’s SDCC autographs. Not a bad haul at all.